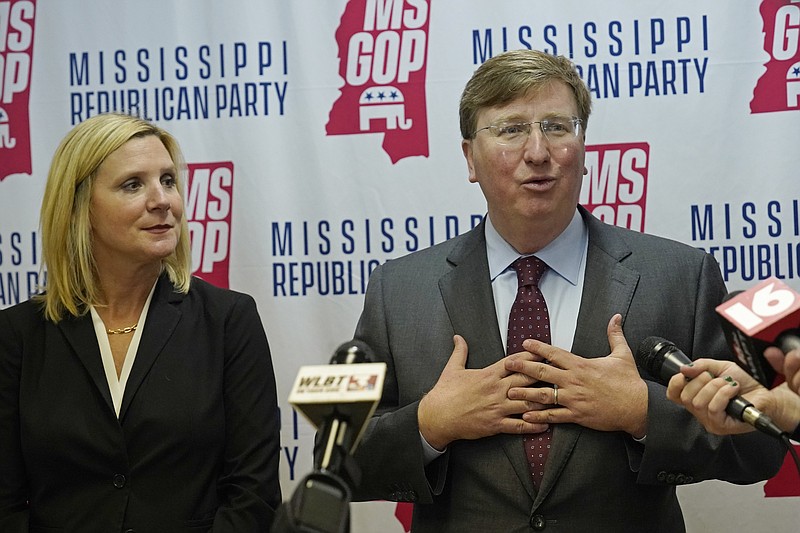 Mississippi Gov. Tate Reeves, speaks with reporters at the party headquarters, with his wife Elee Reeves at his side, after filing his qualifying papers to run for reelection, Tuesday, Jan. 3, 2023, in Jackson, Miss. . (AP Photo/Rogelio V. Solis)

FORT LAUDERDALE, Fla. -- The gunman who murdered 17 people at a Parkland high school nearly five years ago has spent the past nine weeks in the custody of the Florida Department of Corrections. Where, precisely, is anyone's guess.

In an unusually secretive move, the state has refused to disclose the location of convicted killer Nikolas Cruz, 24, who was sentenced to 34 consecutive life terms for the murders and attempted murders he committed at Marjory Stoneman Douglas High School on Feb. 14, 2018.

The sentencing came at the end of a highly publicized trial that ended in October with the jury failing to reach unanimous agreement on putting the defendant to death.

Cruz's own lawyers said the jury's act of mercy stood in stark contrast to the defendant's own actions at the school, but some family members of the victims openly wished for the gunman's fellow inmates to do what the state now cannot -- make Cruz pay for his crimes with his life.

That is the likeliest reason the defendant's whereabouts have not been disclosed. The corrections department is permitted under state law to withhold information that would ordinarily be disclosed if publishing it would create a security risk.

"You're talking about someone who could easily be murdered by another inmate," said Ron McAndrew, a retired Florida prison warden who is now an expert witness on the corrections system. "They're going to do everything they can to keep him alive. Too many inmates have nothing to lose."

Feb. 1 is the qualifying deadline for an election that will include statewide offices, state district offices, legislative seats and county offices. Party primaries are scheduled for Aug. 8, with runoffs Aug. 29. The general election is Nov. 7, with runoffs Nov. 28.

Mississippi, Louisiana and Kentucky are the only states electing governors this year.

"We had the opportunity to accomplish what I believe to be the most significant win in the conservative movement in my lifetime. Mississippi led the way in overturning Roe v. Wade," Reeves said. "I am so proud that Mississippi did that."

Reeves said Mississippi has its lowest unemployment rate in state history, with a tight labor market reflecting a nationwide trend. "We still have more jobs looking for people than people looking for jobs," he said.

Reeves said his term was complicated by 14 natural disasters in Mississippi since 2019. He also oversaw the state's response to the covid-19 pandemic and to a water crisis in its capital city of Jackson, although he has faced criticism from some Democratic officials for limiting funds for infrastructure upgrades.

BATON ROUGE -- The bodies of all four people who were aboard a helicopter that crashed into the Gulf of Mexico while departing an oil platform last week have been recovered.

The U.S. Coast Guard recovered the bodies of a pilot and three offshore workers Monday, according to a statement from the employees' companies, The Advocate reported.

"We extend our sincere condolences to the families and friends of the pilot and passengers on board the aircraft," said the statement from Rotorcraft Leasing Co., Walter Oil & Gas Corp. and Island Operating Co.

"We will continue to cooperate fully with the agencies investigating this tragic incident including the National Transportation Safety Board ... and the Bureau of Safety and Environmental Enforcement."

The helicopter crashed Thursday about 10 miles offshore of Southwest Pass, a shipping channel at the mouth of the Mississippi River southeast of New Orleans.

Last month, another of Rotorcraft's helicopters crashed off the Louisiana coast and the Coast Guard rescued three people.

PARK CITY, Utah -- An employee of a Utah ski resort died after being thrown from a chairlift shaken by a tree that fell onto a lift cable, resort officials and police said.

Representatives of Park City Mountain and the Summit County sheriff said a 29-year-old worker fell at least 25 feet from the Short Cut chairlift into a deep ravine on Monday.

The Park City ski patrol attempted to treat his injuries and evacuated 10 others who also were on the lift.

Summit County Sheriff Captain Andrew Wright told KSL-TV that the man was a ski patroller who fell to terrain that was difficult to access. Ski patrol members took at least 20 minutes to reach the victim and dig him out of what deputies called "chest-deep snow" before attempting to treat him.

As record snowfall continues in Utah, Park City has received 56 inches in the past week. 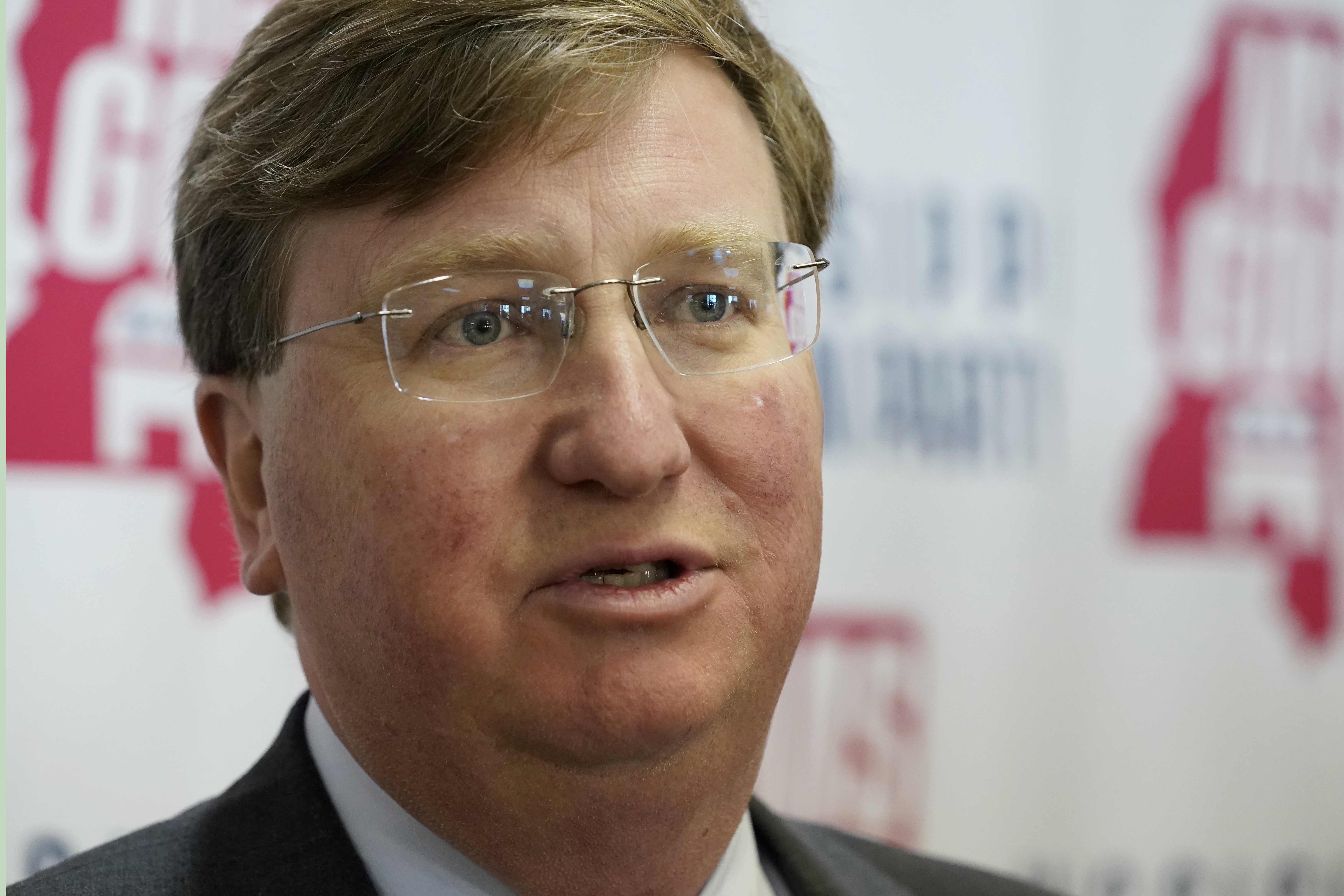 Mississippi Gov. Tate Reeves lists the accomplishments of his administration as he speaks with reporters at the party headquarters after filing his qualifying papers to run for reelection, Tuesday, Jan. 3, 2023, in Jackson, Miss. (AP Photo/Rogelio V. Solis) 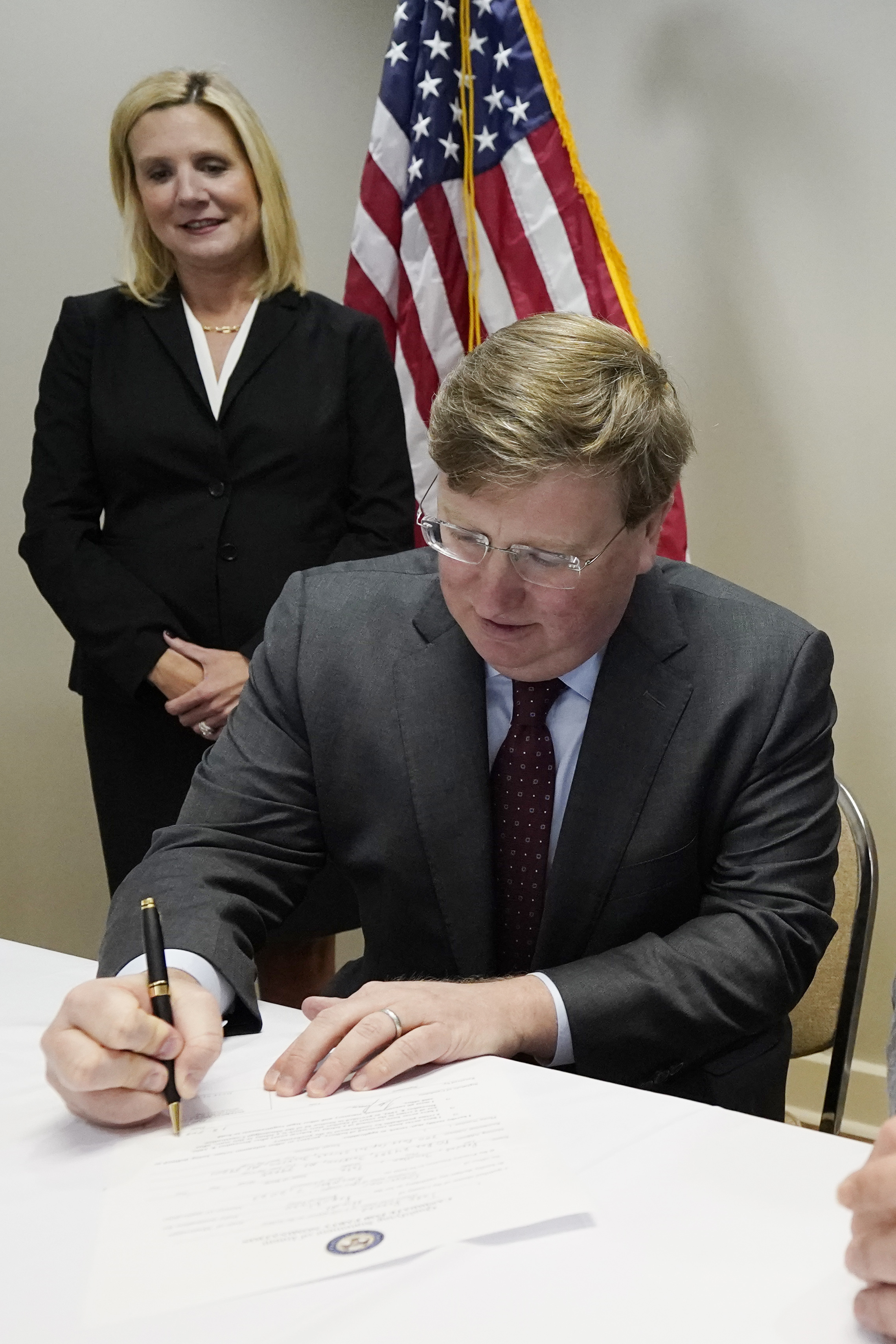