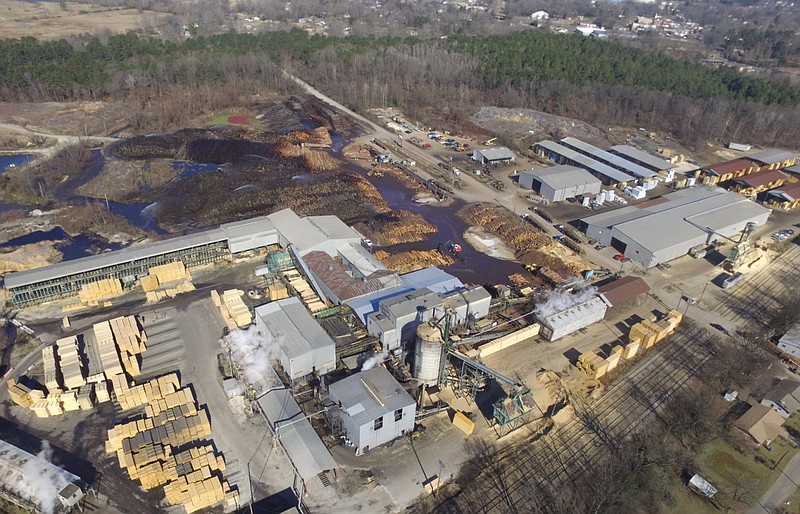 The state of Arkansas and the Environmental Protection Agency are monitoring the cleanup of hydraulic fluid polluting a creek in Malvern downstream from an Anthony Timberlands mill.

An Arkansas Division of Environmental Quality emergency response incident report filed Sept. 12, 2022, said a "release of possible raw sewage" was reported in the 1700 block of Grigsby Ford Road on Sept. 2.

Investigators determined it was "hydraulic oil that was released by Anthony Timberlands in Malvern" into a seven-mile stretch of Chatman Creek that flows into the Ouachita River, according to the incident report.

The creek runs right through cattle rancher James Ross' land in Malvern, and his cattle drink from the water.

Ross recently sent a liver sample from one of his affected cattle for analysis and discovered the cause of death was liver failure.

"I sent one of mine, my neighbor sent three or four of theirs, they all came back contaminated with the elements that were in the water," Ross said. "Basically the elements in hydraulic fluid."

This year, the rancher had four cattle sicken and die after drinking from the creek, and at least the same number if not more died last year.

"It will happen so quick it's unreal, they will just dry up like a raisin and eat the whole time and just die, I mean it's been happening for the last couple of years, all of us down here have had it happen, but we didn't think anything about it," Ross said.

Ross said he met with Anthony Timberlands Inc. once.

"I only talked to [Anthony Timberlands] one time at a meeting and I haven't talked to them since," Ross said.

County, state and federal officials attended a meeting with landowners Dec. 9 at the Hot Spring County Courthouse about a chemical found in the creek that someone had reported and that the state investigated, the Malvern Daily Record reported Dec. 20.

Ross, who attended the meeting, said he saw an ADEQ representative and a few county officials there, but did not see an Anthony representative.

"I never seen anyone from Anthony there, the county judge was up front but the mayor sat in the back of the building," Ross said.

"The ADEQ's basically the one giving all the information out."

Anthony Timberlands, Inc. President Steven Anthony said the chemical discharge in Malvern was not a major release, and it is not ongoing.

"This was never a major chemical spill such as a ruptured pipeline or busted tank, but the periodic release of small amounts of material released over a period of time," Anthony said. He said the company only learned of the presence of chemical material in the creek when contacted by the state.

Anthony said the hydraulic fluid is contained in tanks at the facility and surrounded by catchment devices to make sure a rupture or leak is not released. There can be no discharge if there is no rainfall, and only in the case of major rainfall would anything be discharged, he said.

Anthony said in a statement Dec. 22 that during the past 50 years of operation, the company had never been the subject of an environmental complaint.

Several landowners filed complaints last year and the Environmental Protection Agency was brought in to inspect the site on Oct. 15, alongside Arkansas Division of Emergency Management and Environmental Quality officials, according to the incident report.

ADEQ Office of Water Quality officials said in emailed responses Dec. 22 that water conditions downstream at the creek and circumstantial information gathered by investigators suggests "unpermitted discharges" were happening for a while because of failures in the operation and design of the mill's stormwater system.

"It appears that [Anthony Timberlands] have been not following water permits and was using waste water contaminated with hydraulic oil to continuously spray on their wood products as a dust suppressant," the ADEQ incident report said.

Stormwater systems protect surface water from pollution run-off from a facility when it rains; the Malvern mill has an oil-water separator to prevent oil-based run-off from flowing off site, ADEQ officials said.

A pump system that drains the oil-water separator to a stormwater pond evidently failed, overloading the separator and discharging oil-laden water from the facility.

A "second failure of design or operation appears to be the pumping of oil-laden water to the stormwater pond which was then used to spray down the wood debris piles," ADEQ officials said in the email.

This appears to have "at least partially" allowed the oil-laden water to drain downhill through nearby woods into a concrete ditch outside the facility, ADEQ officials said.

Malvern resident Marion Gibson, who once lived in the neighborhood on the west side of town, said she was concerned the chemical discharge may pose a public health risk to residents.

"I used to live on Kelly Street as a kid, it's an old Black neighborhood that's still old and still Black ... Anthony Timberlands is in these peoples' backyards," Gibson said.

The mill is about half a mile from Kelly Street.

"What they are saying is that the leak went down that little culvert that they concreted," Gibson said.

"That's flood control because it floods frequently there, I remember as a kid looking in the back yard, it looked like a lake."

Gibson posted a video to YouTube of the area around Kelly Street on Dec. 15 showing white piping on the culvert.

Gibson said the current owner of her former family home told her she was not notified by Anthony Timberlands about the chemical discharge.

Chemical components of mineral oil hydraulic fluids can get into the body by swallowing or skin contact; health effects have been observed in animals that breathed, swallowed or had skin contact with organophosphate ester hydraulic fluids; and if spilled on soil, some hydraulic fluid ingredients may stay on top or sink into the groundwater, according to the Centers for Disease Control and Prevention.

A chemical discharge was initially reported last year a week before Labor Day weekend, but no investigation was conducted at that time.

At a follow-up visit by emergency management officials two weeks after the EPA inspected the site Oct. 15, representatives of TAS Environmental Services, the company hired by the state to clean up the creek, told the officials they planned to keep removing two 'rolloffs' or open-top dumpsters filled with chemical material per day and did not have a set date in mind for when they would finish the work, according to the incident report.

According to that report, emergency management officials noted on the visit that 15 rolloffs were on site, and said, "there has been progress on the cleanup compared to what was the case last visit EM conducted."

The ADEQ was notified that the timber company purchased 134,000 gallons of hydraulic fluid for the Malvern facility in 2021 as part of its investigation, but officials did not comment on the amount of hydraulic fluid discharged this year, saying any volume estimates of chemicals discharged would be "purely speculative."

ADEQ officials said Anthony Timberlands is working on a remedial plan put in place by the EPA and providing daily updates to both agencies.

The downstream efforts include absorbent booms and pads, vacuum truck operations and other efforts to collect petroleum products in the water, ADEQ officials said.

ADEQ received two draft proposed remediation and maintenance plans from Anthony Timberlands, and comments on the latest draft were sent to the timber company on Dec. 21.

The EPA will conduct a final walk-through of affected areas after the two plans are approved, then Anthony Timberlands will start implementing the plans under oversight of the ADEQ, officials said.

The ADEQ did not explicitly confirm whether the discharge in the Malvern creek poses a public health threat, but said Ouachita River data shows "no discernible differences" in monitoring data upstream and downstream of the creek's confluence throughout 2022.

Anthony said Dec. 23 that the company has been in contact with parties affected but said the company has not received claims for damage; he later said some landowners shared their concerns.

"We have pledged to cover any losses occasioned by our activity," Anthony said. "Some of the landowners claim damage from the presence of 'heavy metals.' There is nothing involved in our operation that would generate a discharge of heavy metals."

Pastor Jim Lea of Greater New Hope Baptist Church at 1202 W. Sullenberger Ave. in Malvern said Anthony Timberlands has been invited to a public meeting that will be held at the church today at 6 p.m.; the church is two blocks south of Kelly Street.

Anthony said in an email Wednesday that the timber company will make an announcement today "concerning this issue" that will provide information "more fully describing the issue."

"This is a somewhat complicated issue, made more difficult by the fact that the plantsite has zero room to expand stormwater management facilities," Anthony said.