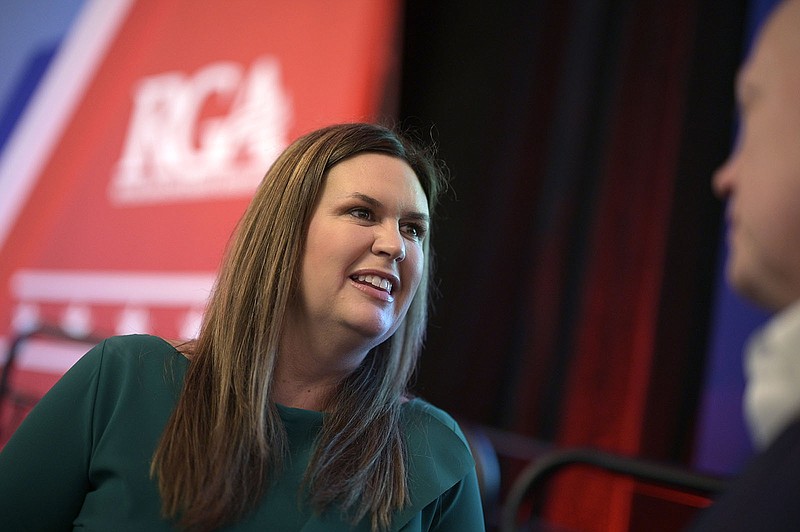 In November, Sanders announced she would move more than $2.5 million from her 2022 campaign to her 2026 re-election effort, and her campaign manager Chris Caldwell would be a senior adviser to her reelection. Act 737 of 2021 allows candidates to maintain remaining campaign funds after an election and use them to run for election or reelection.

"Governor-elect Sanders has been focused on transition and forming her cabinet and has not had any fundraisers since the election," Sanders spokesman Judd Deere said Thursday.

Sanders' fundraising and spending levels in the 2022 election cycle are a record for a gubernatorial candidate in Arkansas.

Her national profile as White House press secretary for President Donald Trump coupled with Trump's endorsement and the continued national presence of her father, former Gov. Mike Huckabee, who ran for president in 2008 and 2016, helped bolster her fundraising, political experts and donors have said.

In contrast, unsuccessful Democratic gubernatorial candidate Chris Jones reported he raised $2.087 million and spent $2.082 million through Dec. 30 for the general election and had $48,523.92 in campaign debt as of Dec. 30.

Sanders isn't the only candidate for a statewide constitutional office with a large amount of remaining campaign funds that may be maintained after an election and used to run for election or reelection under Act 737 of 2021.

Attorney General-elect Tim Griffin of Little Rock, the state's current Republican lieutenant governor, reported raising $1.6 million and spending $884,999.02 through Dec. 30 on his general election campaign, leaving a balance of $797,839.18. He didn't report receiving any contributions after Nov. 8 in the report through Dec. 30.

Griffin said Thursday he hasn't held any fundraisers for the 2026 election since the Nov. 8 election because "I have been focused on my transition to the office of attorney general."

Gibson's campaign debt is comprised of loans that he made to his campaign, according to his report.

Rutledge's unsuccessful Democratic opponent, Kelly Krout of Lowell, reported raising $275,095.44, loaning her campaign $100 and spending $268,222.60 for the primary and general election through Dec. 30.

State law previously required a candidate within 30 days following the end of the month in which an election is held to turn over surplus campaign funds to either the state treasurer for the benefit of general revenue fund account of the state apportionment fund; a political party or a political party caucus of the General Assembly, the Senate or the House; a nonprofit organization that is exempt from taxation under Section 501 (c) (3) of the Internal Revenue Code; cities of the first class, cities of the second class or incorporated towns; or the contributors to the candidate's campaign.

Act 737 of 2021 states a candidate "may" turn over campaign funds to these entities.

Act 254 of 2021 repealed a ban on candidates for public office from soliciting or accepting campaign contributions more than two years before an election at which the candidate seeks nomination or election unless they are seeking contributions to retire a previous campaign debt. The law was enacted after U.S. District Judge James Moody Jr. in May 2020 issued a permanent injunction to replace his earlier temporary order declaring unconstitutional a state law prohibiting candidates for state office from accepting campaign contributions more than two years before elections.

At issue was the constitutionality of Arkansas Code 7-6-203(e), which was adopted by voters in 1996 as part of a package of amendments to campaign-finance laws. The amendments were an effort to combat corruption.

Plaintiff Peggy Jones complained the law infringed on her right of political expression by preventing her from donating money in 2019 to people she wanted to support in the 2022 election cycle. At the judge's request for more specifics, she named one of those people as Sen. Mark Johnson, R-Ferndale, who Jones said had told her he planned to run again in 2022. She said she had supported him in 2018 as well.