OPINION | REVIEW: ‘The Pale Blue Eye’ never quite gets out of 2nd gear 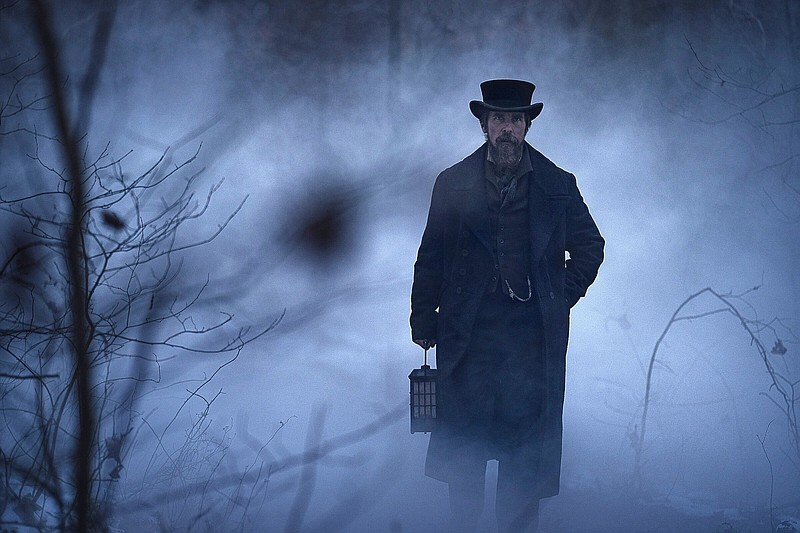 Christian Bale investigates a series of gruesome murders in 1830 Hudson Valley, N.Y., in Scott Cooper's "The Pale Blue Eye," an adaptation of Louis Bayard's 2003 novel of the same name. It's a film based on some really good material, that takes place in an intriguing setting, and that sports a terrific cast who click right into place. Yet despite the many things it has going for it, "The Pale Blue Eye" can never quite get out of second gear.

Bale plays Detective Augustus Landor, a seasoned detective who knows his share of heartache. When we first meet him, it has been three years since his beloved wife died. To make matters worse, his daughter Mattie (Hadley Robinson) has run off, leaving Augustus alone with his sorrow. Aside from drinking at a nearby tavern run by Charlotte Gainsbourg's warm but underwritten Patsy, he copes by losing himself in his work, which leads to him being summoned to the U.S. Military Academy at West Point by Superintendent Sylvanus Thayer (played by Timothy Spall who wears a well-carved stoic expression better than anyone).

We learn there has been a tragic death at the esteemed institution -- a suicide by hanging of one of their cadets, a young man named Fry (Steven Maier). Superintendent Thayer wants Augustus to investigate. But it turns out he isn't nearly as interested in finding out the truth as he is in protecting the honor and reputation of the country's premier military academy. Augustus accepts, setting up the mystery that drives the rest of the movie.

Upon beginning his investigation several disturbing truths are revealed. Augustus meets with the medical examiner, Dr. Daniel Marquis (Toby Jones) who informs him that the young cadet's heart was cut out of his body postmortem, apparently while it was in the Academy's morgue. To add an extra layer, while examining the body Augustus discovers evidence indicating this may not be a suicide but a ritualistic murder. His suspicions are later confirmed after the body of another cadet is found, with its heart removed as well.

To help with his investigation, Augustus secretly recruits an eccentric yet brilliant cadet named Edgar Allen Poe (Harry Melling). Poe serves as his eyes and ears around West Point, and the two develop a strange but compelling partnership. Both characters have their own interesting angles. Bale's scruffy and tired-looking Augustus is haunted by ghosts from a past he keeps tightly bottled up inside of him. Melling's Poe is somewhat of an outcast at the Academy but a keen observer. A future poet himself, Poe begins to see the case through his own unique lens. He also falls for Lea (Lucy Boynton), the sickly daughter of Dr. Marquis which is one place where the story starts to show some cracks.

Unfortunately the mystery itself never quite comes to a boil the way you might hope. Despite its hearty premise and good setup, it feels like something was lost between paper and screen. Even its impressive cast (which also features Gillian Anderson, Simon McBurney and Robert Duvall) can't quite make this overlong and overly staid story hum. It isn't until the actual mystery is solved, and we get an interesting (though not altogether convincing) final act character shift, that the movie really starts to simmer.

While the story has a tough time finding its footing, the setting is nicely realized starting with Stefania Cella's production design and Kasia Walicka-Maimone's costumes. The chilly blues and grays of Cooper regular Masanobu Takayanagi's cinematography create a gothic atmosphere fitting for a Poe-like short story. It all makes for a handsomely made period piece with a visual presentation that almost makes you look past the borderline sluggish storytelling.

I may sound pretty down on "The Pale Blue Eye," but I do like much of what the movie is going for. It makes for an oddly intriguing Edgar Allen Poe origin story, shedding some light on what would shape him into the writer he would become. And Bale (who has worked with Cooper twice before on "Hostiles" and "Out of the Furnace") is a good fit for what amounts to a tortured soul character study. If only the film's mystery was as interesting and involving as the off-kilter partnership between its grieving gumshoe and peculiar poet-to-be. That's something that gnawed at me throughout.