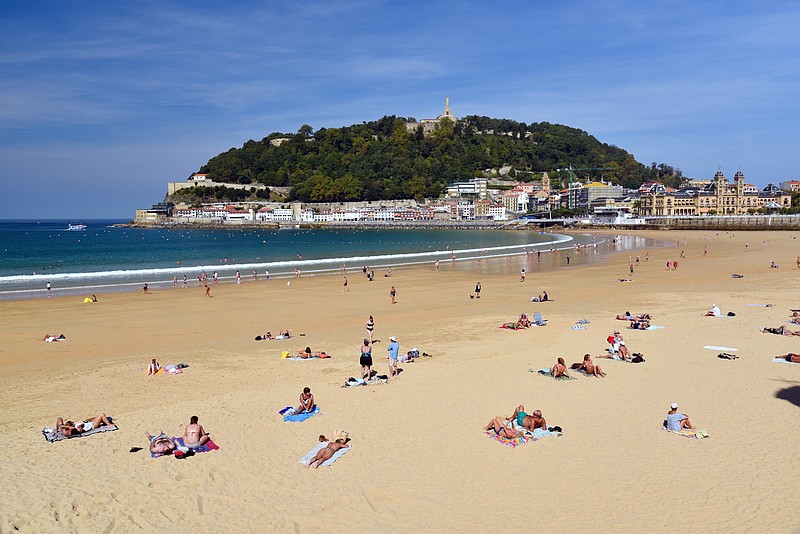 Jostling with enthusiastic eaters at the bar, I munch on my last spider crab open-face sandwich. A tiny plate of toothpicks is all that's left of my meal. I keep them because this allows the bartender to tally the bill. After paying, he insists I drink one more glass of txakoli (cha-koh-LEE) — the local sparkling white wine. It's on the house ... and falls nearly from the ceiling as he theatrically pours from as high as he can reach. No one but me marvels as the house wine high-dives expertly into my glass. Watching the bartender's face — proudly set off by a red neckerchief, surrounded by a happy commotion of black berets — I think it's no wonder these Basque people are so stubborn when it comes to independence.

In Basque country, bright white chalet-style houses with patriotic red-and-green shutters dot lush rolling hills. The Pyrenees mountains soar high above the Atlantic. And surfers and sardines share the waves. Insulated from mainstream Europe for centuries, this plucky region has maintained its spirit while split between Spain and France.

The beach resort of San Sebastian, just over the French border in Spain, is the best single stop in Basque country. Shimmering above the breathtaking bay of La Concha, elegant and prosperous San Sebastian (or "Donostia" in the local Euskara language) has a favored location with golden beaches book-ended by twin peaks (Monte Urgull on the east end of the bay, and Monte Igueldo to the west), and a cute little island just offshore.

A delightful beachfront promenade runs the length of the bay, with an intriguing Old Town at one end and a smart shopping district in the center. The city has 186,000 residents and almost that many tourists in summer. With a romantic setting, a soaring statue of Christ gazing over the city, and a late-night lively Old Town, San Sebastian has a Rio de Janeiro aura and provides a scenic and fun-loving introduction to Spain's Basque country.

In 1845, the doctor of Spain's Queen Isabel II recommended she treat her skin problems by bathing here in the sea. Her visit caught the attention of Spain's aristocracy, and soon the city was on the map as a seaside resort. By the turn of the 20th century, Donostia was the toast of the belle epoque, and a leading resort for Europe's beautiful people. Before World War I, Spain's Queen Maria Cristina summered here and held court in her Miramar Palace overlooking the crescent beach. Hotels, casinos, and theaters flourished. Later, the Spanish dictator Franco, who worked so hard to suppress Basque culture, overlooked his politics to enjoy 35 summers here. (You can bet he called it San Sebastian, not Donostia.)

The shell-shaped bay of La Concha, the pride of San Sebastian, has one of Europe's loveliest stretches of sand. Lined with a 2-mile-long promenade, it allows even backpackers to feel aristocratic. While pretty empty off-season, sunbathers pack its shores in summer. But year-round, the beach is surprisingly devoid of eateries and money-grubbing businesses. There are free showers, and cabinas provide lockers, showers, and shade for a fee. For a century, the lovingly painted wrought-iron balustrade that stretches the length of the promenade has been a symbol of the city; it shows up on everything from jewelry to headboards. It's shaded by tamarisk trees, with branches carefully pruned into knotty bulbs each winter that burst into leafy shade-giving canopies in the summer — another symbol of the city.

Txikiteo (chih-kee-TAY-oh) is the word for hopping from bar to bar, enjoying small sandwiches and tiny snacks and glasses of wine. Local competition drives bars to lay out the most appealing array of pintxos. The selection is amazing. Just wander the streets (Calle Fermin Calbeton is best) and belly up to the bar at whichever spot appeals. For top-end tapas, seek out Bar Goiz Argi, Ganbara Bar, and La Cuchara de San Telmo. You'll enjoy a can-can of petite gourmet snacks: heaps of peppers, mushrooms and seafood. Don't miss the tartaleta de txangurro — that's spider-crab spread on bread. One word you're sure to learn in Euskara is gustagarri (delicious).