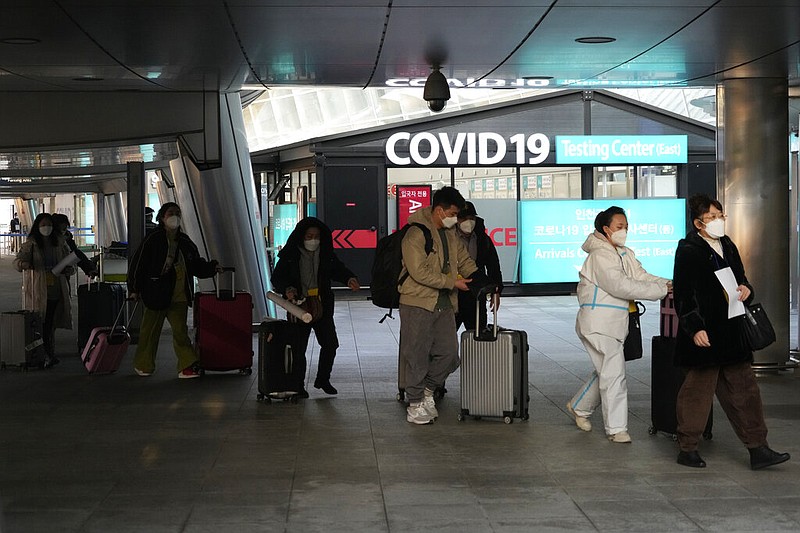 TOKYO — Japan and South Korea defended public health restrictions on travelers from China on Wednesday, a day after China stopped issuing new visas in both countries in apparent retaliation.

Chinese embassies stopped issuing new visas for South Koreans and Japanese on Tuesday. It wasn't clear whether China would expand the visa suspensions to other countries that have imposed stricter virus testing on passengers from China following its covid-19 surge.

According to South Korea's Disease Control and Prevention Agency, about 17% of the 2,550 short-term travelers from China from Jan. 2 to Tuesday have tested positive.

South Korea has stopped issuing most short-term visas at its consulates in China through the end of January while also requiring all passengers from China, Hong Kong and Macau to submit proofs of negative tests taken within 48 hours of their arrival in addition to covid-19 tests at the airport.

Japanese Chief Cabinet Secretary Hirokazu Matsuno criticized China for "one-sidedly" restricting visa issuances to the Japanese nationals "because of a reason that is not related to covid-19 measures."

Tokyo protested and demanded China scrap the measures and that Japan will "respond appropriately while closely watching China's infection situation and how information disclosures are handled by the Chinese side," Matsuno said.

Matsuno said Japan had to take temporary measures to avoid rapid inflow of infections into Japan because of China's spreading infections and lack of transparency about the situation.

He said that Japanese border measures are purely aimed at preventing infections and have aimed to limit effects on international travel. "It is extremely regrettable that China has one-sidedly restricted visa issuances."

The Chinese embassies in Tokyo and Seoul announced the suspensions in brief online notices, without providing reasons or details such as when visa issuances will resume.

China's Foreign Ministry threatened countermeasures last week against countries that had announced new virus testing requirements for travelers from China. At least 10 governments in Europe, North America and Asia have done so recently. Meanwhile, Thailand sent three ministers to Bangkok's Suvarnabhumi Airport to welcome the country's first planeload of Chinese tourists in years, in a bid to revive inbound tourism.

Japan reopened its borders for individual tourism in October. Most travelers can show proof of vaccination instead of testing at the airport, unless they show symptoms, but since Dec. 30 travelers from China must show pre-departure negative tests and take an additional test upon arrival. Those who test positive must quarantine at designated facilities for up to seven days.

According to health ministry statistics, about 8% of 4,895 passengers of all nationalities tested positive upon arrivals from Dec. 30 to Jan. 5, and most of the infected were Chinese or those who had recently been in China.

China's worsening covid-19 situation and lack of information mean that South Korea may need to extend restrictions, senior Disease Control and Prevention Agency official Lim Sook-young told a briefing. "Just because we haven't seen the emergence of a new variant doesn't necessarily mean we won't see one later," she said.

Korea's Park said he doesn't believe that the friction over covid-19 measures would seriously hurt bilateral relations, which he described as stable.

"The most important reason for our government's measure is the lives and safety of our people," he said. "We will monitor the covid-19 situation in China before determining how long we will maintain our measures."

Liang Wannian, the head of China's covid-19 expert panel, said that all strains of covid-19 found in China have been reported to the WHO. "We have not found any new variants that are worthy of attention and concern," he said at a briefing Wednesday in Beijing.

South Korea's Ministry of Small and Medium-sized Enterprises and Startups on Wednesday opened telephone lines for small businesses to report any disruption caused by China's decision to halt short-term visas. While only a few calls had been received as of Wednesday afternoon, officials say that the Chinese steps could hurt some companies exporting to China by forcing their employees to cancel visits and business meetings.

"We are closely monitoring how much disruption," the Chinese steps may cause, said ministry official Lee Gwon-jae.

Impact on Japan could be limited for now, as Japanese business people are still largely watching the development. A major tour agency said none of its customers were currently seeking China visas.

TBS television in Tokyo reported that applicants at the Chinese embassy's visa center were successfully picking up visas due to be issued Wednesday, but that new applicants were being turned away.

A South Korean restaurant owner in Beijing said the announcement forced friends to postpone plans to visit China. He spoke on condition of anonymity out of concern his business might be affected. He added that he is preparing to renew his Chinese work visa and doesn't know whether that will be affected.

China's move appeared to be grounded in its strict view of reciprocity, and demands that its citizens be treated the same as those of other countries.

"A handful of countries, in disregard of science, facts and their actual epidemic situation, have insisted on taking discriminatory entry restriction measures targeting China," Chinese Foreign Ministry spokesperson Wang Wenbin said Wednesday. "China made reciprocal responses in light of the actual discriminatory measures taken by these countries against China."

He did not respond directly when asked if new visas had been suspended for South Koreans and Japanese, saying only that he had "made it very clear."

The Japanese Embassy in China, in a tweet in Chinese later Wednesday, wrote that Japan is not restricting visa issuances and that "China's approach is completely lacking in reciprocity."

China is facing a surge in cases and hospitalizations in major cities after the country abruptly reversed its "zero-covid" strategy of trying to contain the virus last month in response to what it says was the changing nature of the outbreak. That came after three years of lockdowns, quarantines and mass testing that prompted rare politically tinged protests in major cities. The country is bracing for a further spread into less developed areas with the start of the Lunar New Year travel rush, set to accelerate in the coming days.

The World Health Organization and several nations have accused China of withholding data on its outbreak.

The worst appears to be over in Beijing, which was hit hard by the initial onslaught of infections, but challenges remain, said Wang Guiqiang, the head of the infectious disease department at Peking University First Hospital.

"We have borne the brunt in Beijing," he said. "From the perspective of hospital and clinical treatment, the pressure is still huge."