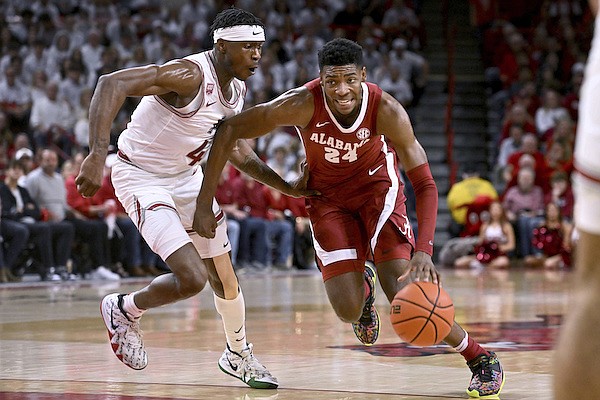 Alabama forward Brandon Miller (24) tries to get past Arkansas guard Davonte Davis (4) during the first half of an NCAA college basketball game Wednesday, Jan. 11, 2023, in Fayetteville. (AP Photo/Michael Woods)

The Crimson Tide defeated the 15th-ranked Razorbacks 84-69 to record their fifth consecutive victory. Arkansas lost a game at Bud Walton Arena for the first time since a 75-74 loss to Vanderbilt on Jan. 4, 2022.

Alabama (14-2, 4-0 SEC) took command with three-pointers on three consecutive possessions late in the game to take a 74-63 lead. Brandon Miller, the SEC’s leading scorer, deflated the raucous home crowd with back-to-back threes that forced an Arkansas timeout with 3:42 remaining.

The Crimson Tide outscored Arkansas 19-6 in the final 4 minutes, 32 seconds.

The Razorbacks (12-4, 1-3) trailed by 12 points midway through the second half, but clawed back to within 65-63 on Jalen Graham’s turnaround with 4:55 remaining. That prompted Alabama coach Nate Oats to take a timeout and the Crimson Tide responded with a 13-0 run.

Noah Clowney buried a three-pointer from the corner with the shot clock winding down to give Alabama a 68-63 lead with 4:32 to play. Miller followed with consecutive treys that quickly followed an Arkansas turnover.

Miller scored 14 points despite not attempting a field goal before halftime. The freshman entered the game leading the SEC with 19.1 points per game.

Graham scored 16 points off the bench for the Razorbacks. Davonte Davis also had 16 points and a game-high 10 rebounds, and Ricky Council added 15 points.

Makhi Mitchell scored 10 points for the Razorbacks before fouling out with more than seven minutes remaining.

Wednesday's game was the first of two this season between the Razorbacks and the Crimson Tide, who are scheduled to play again Feb. 25 in Tuscaloosa, Ala.