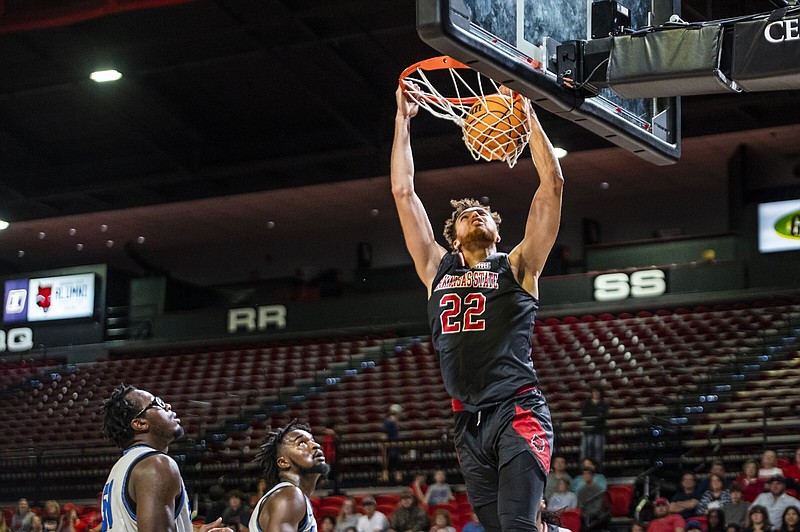 Forward Omar El-Sheikh is averaging 11.4 points per game along with a team-high 9.3 rebounds for Arkansas State this season. El-Sheikh, a graduate student from Egypt is in his first season at ASU after stints at Fairfield University and Assumption College. (Photo courtesy Arkansas State Athletics)

As 2020 faded into 2021, Omar El-Sheikh sat in his room in Worcester, Mass., and considered everything.

There was time. A pandemic continued to ravage the world, and, while of minor consequence, canceled Division II Assumption College's basketball season.

That meant another year without the sport that El-Sheikh had traveled halfway across the globe to play.

A handful of teammates that started the year on campus left once there would be no games to play. El-Sheikh had limited access to Assumption's gym due to covid-19 restrictions. With his family back home in Egypt, the closest thing El-Sheikh had to blood relatives in the United States lived four hours away on New York's Long Island.

Isolated, El-Sheikh let his mind wander. And amidst all the challenges, he insisted on finding positives.

"It was a good time for me to mature and know more about myself," El-Sheikh told the Arkansas Democrat-Gazette. "I put my faith in God's plan and just focused on the here and now, not worrying about the future."

El-Sheikh's future held far more than even he could have pondered at the time -- transferring to a third school in the span of four years, returning to the Division I ranks and emerging as one of the Sun Belt Conference's top rebounders, leading Arkansas State University with an average of 9.3 through its first 16 games.

That's on top of giving the Red Wolves a surprising scoring boost, as El-Sheikh, 24, is averaging 11.4 points per game entering tonight's visit from Texas State, while somehow attempting to fill the big shoes left by reigning Sun Belt Player of the Year Norchad Omier.

"When we got him, we were really happy with his ability to score around the basket -- his skillset and his learning ability and his maturity," ASU Coach Mike Balado said. "It just kind of worked out where he's given us a little bit more than we expected offensively, but he's given us exactly what we expected on the glass."

Running through several nations along Africa's east coast, the Nile River winds its way through Egypt before flowing into the Mediterranean Sea.

Most of Cairo sits to the east of the Nile. Just south and across the river is Giza, the fourth-largest city in all of Africa and home to the oldest of the Ancient World's Seven Wonders, the Great Pyramid.

Until moving to the United States halfway through high school, El-Sheikh also called Giza home. He'd grown up in an athletic family -- his brother played handball, his sister played volleyball and his dad played both soccer and tennis while also winning national titles as a swimmer.

But after starting out with water polo, El-Sheikh transitioned to basketball, Egypt's second-most popular sport behind soccer, when he was 7 years old.

El-Sheikh earned his way onto his club team's senior side and eventually represented Egypt at the FIBA U-19 World Cup, yet he knew his best route to a professional career would be by playing collegiately.

"It wasn't an easy decision to leave my family and my friends that I grew up with, everything that I know, coming to a place where the only thing I know about it is from the movies," El-Sheikh said. "The dream started building up inside me that I want[ed] to come here and play because why not? I just felt that I could do it."

After graduating from The Knox School in St. James, N.Y., and heading to Fairfield (Conn.) University -- the two are separated by a little more than a 75-minute ferry ride across the Long Island Sound -- things devolved into a nightmare for El-Sheikh.

He missed half of his first season in 2017-18 due to eligibility issues. He played just 72 minutes the next year due to misdiagnosed patellar tendinitis. Ahead of El-Sheikh's third season, Fairfield changed coaches and all parties decided it would be best for El-Sheikh to redshirt the season.

Then came El-Sheikh's transfer to Assumption and a canceled 2020-21 season before finally playing in 2021-22 where he posted 11.9 points and 11.2 rebounds in a little more than 25 minutes per game.

He felt the job in college wasn't yet done.

Those immersed in the college basketball world might remember then-Louisville Coach Rick Pitino's off-hand remark about "four white guys and an Egyptian" following a 2014 game in which the Cardinals tried not to run up the score against an outmatched Division II program.

That Louisville even had an Egyptian on its roster in Anas Mahmoud was a product of Balado -- then an assistant for the Cardinals -- and by extension, Ahmed Awadallah, a Louisville alumnus.

When El-Sheikh was in his early teens, Awadallah had scouted him in Egypt, sending El-Sheikh to an NBA Basketball Without Borders camp in South Africa. The two stayed in touch over the years, reconnecting last year after El-Sheikh entered the transfer portal.

El-Sheikh took visits to schools all over the country, but the match in Jonesboro was easy.

"When I came here, they were prepared to tell me not what I wanted to hear really, but the truth and what will actually help me in my career," El-Sheikh said. "I just felt it in my heart: I trust these people, I want to be here and our visions align."

Balado trusted Awadallah. In El-Sheikh, Balado knew he was getting a high-volume rebounder and a veteran presence to help reload after several key departures from the best team he'd had in five seasons with the Red Wolves.

The idea of being a veteran, however, remains funny to El-Sheikh.

In some ways, last year at Assumption felt like his first full season of college basketball. Combined, the 58 games he'd played over the past five seasons equated to less than two campaigns.

But with the calendar flipping to 2023, the end is near for El-Sheikh. He'll exhaust his eligibility in a couple of months, leaving ASU with a master's degree in business administration to go along with his undergraduate degree from Assumption.

El-Sheikh would like to stay in the U.S. as a professional. He might have to settle for an opportunity in Europe or even back home in Egypt.

To think that far ahead would go against everything El-Sheikh learned back in western Massachusetts.

"Sometimes life will [stink], but I've only got myself and God," said a reflective El-Sheikh. "No matter what ... I've just got to maintain a certain standard which is working hard, believing in myself and striving to do what is right in front of me."