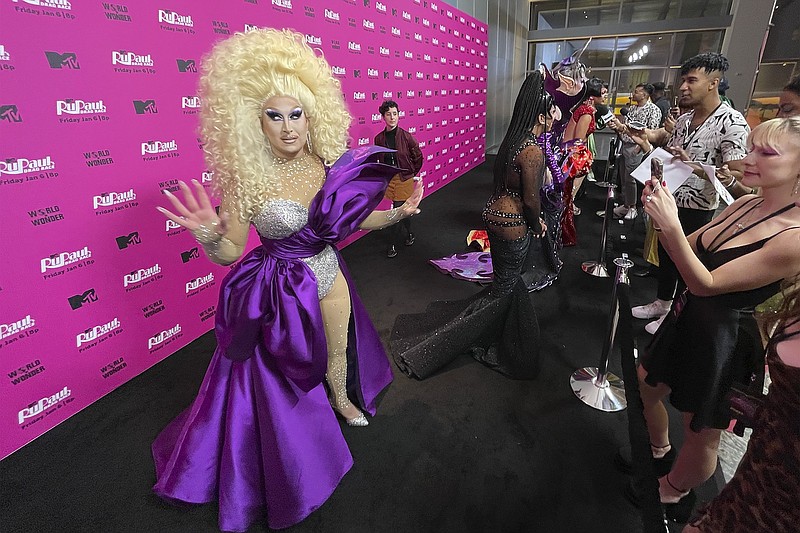 NEW YORK — As the cast of "RuPaul's Drag Race" celebrated the new season, they credited the show's creator with popularizing drag and expressed concern about the protests and threats to the performance style at the heart of the long-running series.

"RuPaul really brought drag into the mainstream, truly made people aware that it's an art form more than anything" contestant Marcia Marcia Marcia said at the Jan. 5 Season 15 premiere in New York. The new season starts Friday on MTV.

"I think everyone was like fine with drag for a little bit," said the drag queen with the "Brady Bunch"-inspired name. "And now history is repeating itself and people are speaking out against it, which I think is so silly."

With a long and rich history, drag — the art of dressing as another sex, often for performance — has been attacked by right-wing politicians and activists who have falsely associated it with the "sexualization" and "grooming" of children. In recent months, protesters — sometimes bearing guns — have besieged drag story hours, during which performers read books to children. Bans on children at drag events have been floated. In late November, a shooter at a Colorado Springs nightclub turned a drag queen's birthday party into a massacre and was charged with hate crimes and murder.

Another contestant, Jax, said the threats, protests and hate were "disheartening" but not surprising: "Just like being a person of color, being a minority, growing up in certain communities, it's something that I've had to undergo my entire life.

"But we always prevail," Jax added. "We always prevail and we're always going to come out on top because we're on the right side of history and we love what we do and we're not doing anything to harm anybody. We're just trying to bring love to everything."

To contestant Loosey LaDuca, as well, this is nothing new: "It is really unfortunate that during this time, drag queens have become the new target. But LGBT people are no stranger to being the, you know, the public enemy."

Meeting threats with caution is fine, LaDuca said, but "we'll never be scared."

Last month, New York City Councilman Erik Bottcher attended a drag story hour in his district. He filmed and posted video of "dozens of homophobic protesters outside with the most disgusting signs verbally attacking the families and the drag queen." Two days later, he said, anti-drag activists vandalized the hallway outside his office and gained entry to his apartment building.

"Two of them were arrested. A third was arrested for assaulting one of my neighbors," he said. "This is all an attempt to intimidate those of us supporting drag story hour."

Contestant Irene Dubois has a theory about what's behind the vitriol aimed at drag performers.

"The further we advance and the more that we are embraced, accepted, celebrated that pendulum — they're going to try to swing it back, to move our movement back," he says of anti-drag activists. "But you cannot put this genie back in the bottle. Darling, we are fabulous."

Marcia Marcia Marcia had a simple message for critics of drag, which she says is "all about fun and expression": "If you have a problem with those things, I think you need to re-evaluate."

In the end, contestant Princess Poppy hopes that it's the impact RuPaul has made on culture with "Drag Race" that will prevail.