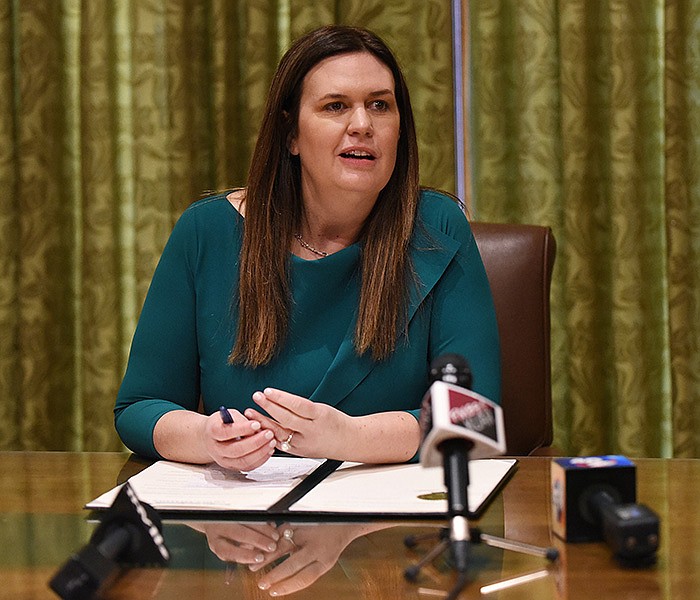 Gov. Sarah Huckabee Sanders speaks about her executive order before signing it Wednesday. Afterward, she called on lawmakers to give parents more say, “including the right to choose the school that’s best for their child, whether it is public, private or parochial.” (Arkansas Democrat-Gazette/Staci Vandagriff)

In her eighth executive order issued in her first two days as governor, Sarah Huckabee Sanders on Wednesday directed state Department of Education Secretary Jacob Oliva to lay the groundwork for her proposed education overhaul.

During a news conference with more than 20 Republican state lawmakers at her side, Sanders said the executive order signed Wednesday calls for a comprehensive approach at education that will "run parallel" with a single education bill that she hopes lawmakers will enact during the regular session that started Monday.

"We are going to have a laser-like focus on improving education here in the state," she said.

Sanders said she wants to combine the Arkansas LEARNS plan with teacher pay raises into one education bill for the Republican-dominated Legislature to enact into law with a generational impact on education, and she hopes to roll out the bill "very soon."

The desire to consolidate these matters into one education bill has become a sticking point for some lawmakers.

"I think putting everything in and building a broad base of support is the best thing for the state and ultimately the best thing for the students of Arkansas," Sanders said at her news conference in the governor's conference room. "Everybody, hopefully all of the stakeholders involved, get a little bit of some of the things that they want to see, but ultimately it is because we want to take a comprehensive approach to addressing the education system and education reform here in the state."

House Democratic leader Tippi McCullough of Little Rock said Wednesday she prefers for the teacher pay raise to be in separate bill.

"We're going to say yes to teachers and no to vouchers," she said at a news conference at the state Capitol where Democrats expressed concerns about some of Sanders' priorities.

In remarks to lawmakers Tuesday, Sanders asked them to send her legislation that expands pre-kindergarten access, improves literacy and gives students what she called "real-world skills they need to succeed in the workplace."

She said parents cannot be an afterthought in education and parents are the foundation of a child's success, "so let's give parents a greater role in education, including the right to choose the school that's best for their child, whether it is public, private or parochial.

"When we give parents a choice, we give children a chance," Sanders said Tuesday.

Last week, she said "I do think that we can do a better job of letting some funding follow the student [with] things like education savings accounts, stuff like that." She said parents of students attending private schools or who are home-schooled wouldn't necessarily get the same amount as the state provides to public schools for students, and that could be phased in.

Senate Education Committee Chairwoman Jane English, R-North Little Rock, said in an interview that "I haven't seen the legislation yet, so I don't know what that will look like.

"Looking at it all together is probably a very good idea," she said.

Sanders said Wednesday her latest executive order focuses on expanding early childhood education and "bringing all the stakeholders to the table to make sure we are focused on improving literacy here in the state of Arkansas.

"It will also start the process of redoing the accountability system under the direction of the secretary as well as improved coordination between departments and the state board to expand charters and begin the process of bringing all of those stakeholders to the table," she said.

Oliva said the executive order provides the state Department of Education the foundation, the blueprint and the road map "of how we are going to take these [LEARNS plan] initiatives and put them into practice.

Oliva said he knows foundational years are critical to ensure students have the skills to be sufficient, proficient readers.

"If we can really look at making sure those opportunities exist at every single zip code, then we know we can hit that goal of 90 to 100% of our third-graders reading at or above grade level, and when we do that then they can be in those career pathways, they can be on a pathway onto post secondary attainment and we know we are going to get it right," Oliva said.

Expanding choice opportunities for families is critical, he said.

"Families have a right to have a seat at the table and find a learning environment that works best for their children and for the needs of those families, and this executive order is going to start laying down how we can get a state of the state, and analyze that data, and make further recommendations for how we can improve and streamline those processes," he said.

• Prioritizing the use of federal and state funds to expand access to quality early childhood education for at-risk children.

• Encouraging businesses to grow early childhood centers to provide more working families with the support needed to enter or remain in the workforce through a pilot program.

• Establishing systems, structures and processes to start within 90 days that incentivize the adoption and implementation of high-quality instructional materials and curricula for core academic instruction for all students and intervention programs for struggling students.

Under the executive order, Oliva said the agency will look closely at the benchmarks the state uses to issue letter grade ratings to public schools.

The executive order tasks the department with ensuring districts are applying school safety recommendations, coordinating with the state Board of Education to streamline the process to continue, expand and replicate effective charter schools and reviewing parent and public access to information on school curriculum.

The agency is expected to review the educator workforce in the state and Arkansas' preparation and licensure requirements for teachers, according to the executive order.

After being sworn in Tuesday as Arkansas' first female governor, Sanders urged state lawmakers to think bigger and bolder and to do better than Arkansas has ever done before in this year's regular session.

In her subsequent inaugural address on the steps of the state Capitol on Tuesday, the governor described herself as "a bold conservative reformer" and pledged to sign executive orders aimed at freezing state government hiring and regulations and at preventing "the political indoctrination" of Arkansas' schoolchildren.

McCullough said there was a lot to like about the first speech Sanders gave to lawmakers Tuesday, saying she agreed with the new governor's mentioning the need to raise teachers' salaries and improve the state's adoption and foster care systems.

On the state Capitol steps Tuesday, Sanders pledged to sign an executive order to stop the "political indoctrination" and "brainwashing our children with a left-wing political agenda."

"Democrats are ready to work with our Republican colleagues on these issues, but we couldn't find more of a difference in tone in the governor's two speeches yesterday," McCullough said Wednesday.

"First in her address to the legislature she mentioned reforms to the foster care and adoption system and pre-K expansion, then she left those out of her public address on the Capitol steps."

When it comes to how much influence Democrats can have in the session, Senate Democratic leader Greg Leding of Fayetteville and McCullough acknowledged that Democrats won't have the ability to do much.

In the House, Democrats hold 18 out of 100 seats and six out of 35 in the Senate, with the Republicans holding the rest of these legislative seats.

"Obviously, when it comes to pushing back against some of the Republican priorities, the governor's priorities, we don't necessarily have the numbers to win those fights," Leding said.

He said Democrats want to work with Sanders on "criminal justice reforms," with McCullough saying they will try to collaborate on public safety, tourism and education bills.

Despite their small numbers, McCullough said Democrats will still "stand up for values and our ideas," saying they will push for marijuana decriminalization, expungement of nonviolent possession charges and adding rape and incest exceptions to Arkansas' ban on abortion.

A spokesperson for Sanders didn't respond to email requests to the governor's office seeking a response to the Democrats' remarks.

The calendar of public events of the 94th General Assembly for today, Day 4, of the 2023 regular session.

The legislative calendar is at https://www.arkleg.state.ar.us 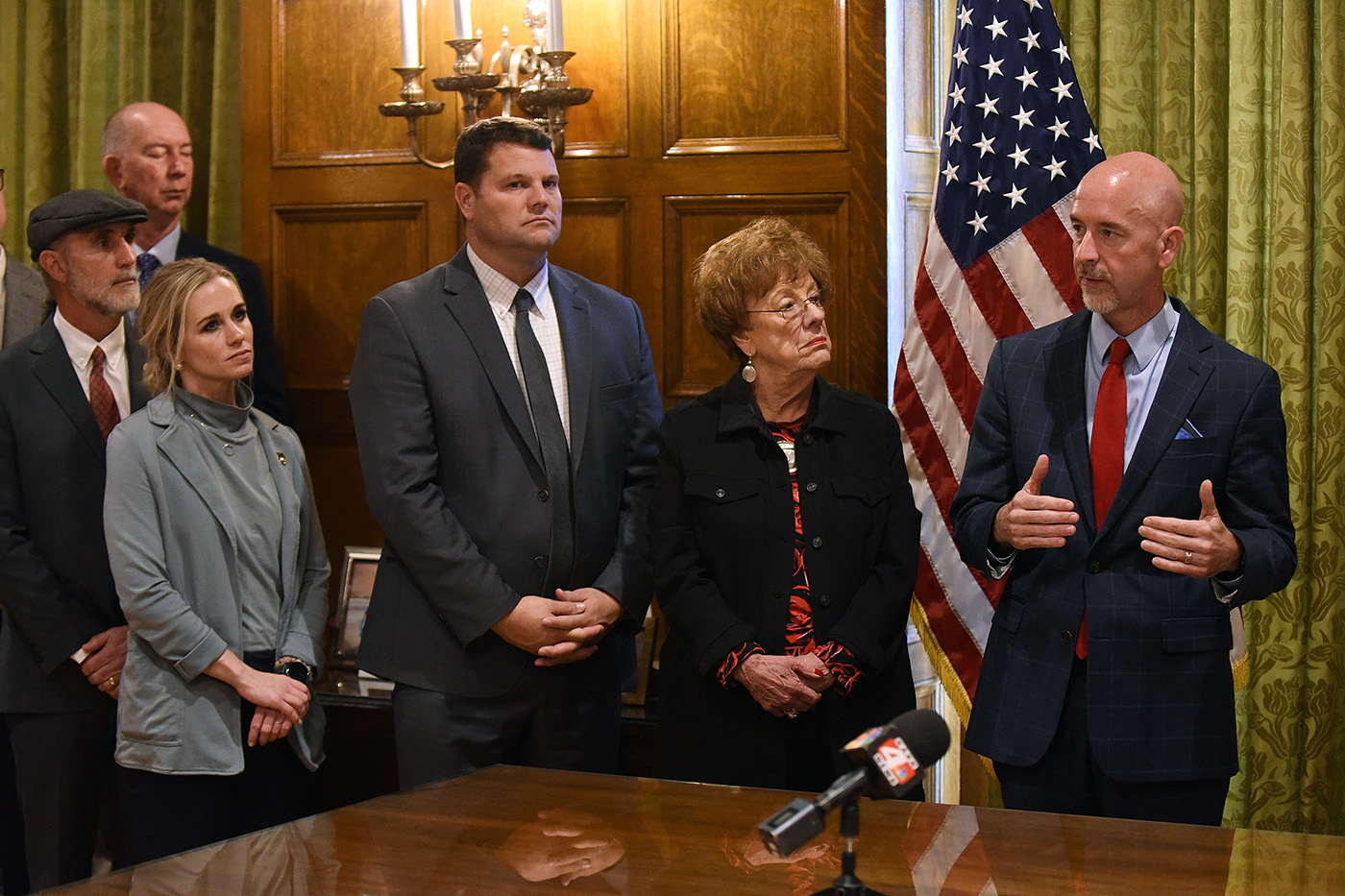 State Education Secretary Jacob Oliva (right), speaking with lawmakers Wednesday after Gov. Sarah Huckabee Sanders signed her executive order on education, said thanks to the order “we know we are going to get it right.” (Arkansas Democrat-Gazette/Staci Vandagriff) 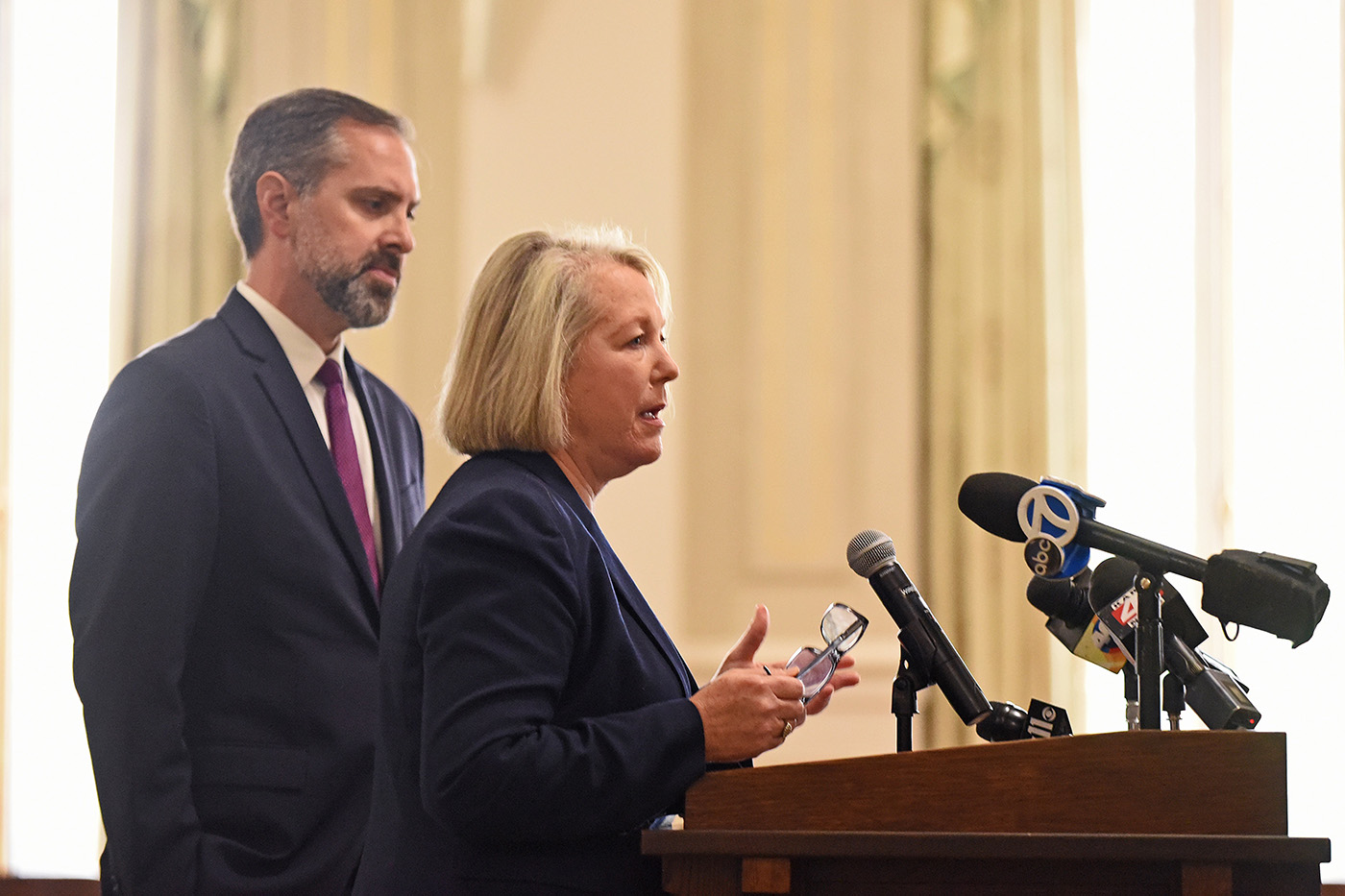 House Democratic leader Tippi McCullough and Senate Democratic leader Greg Leding expressed concerns Wednesday over some of Gov. Sarah Huckabee Sanders’ priorities. “We’re going to say yes to teachers and no to vouchers,” McCullough said. But she and Leding acknowledged that their party has little say in the plans. (Arkansas Democrat-Gazette/Staci Vandagriff)