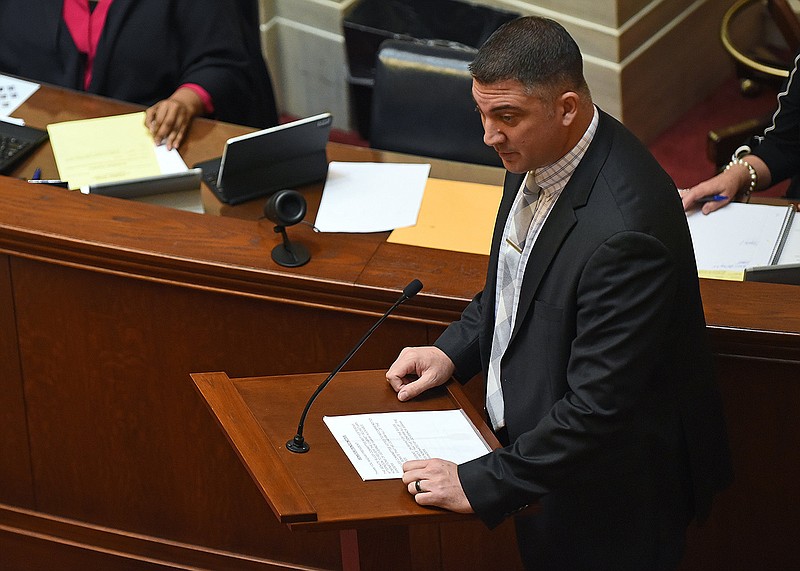 In a voice vote with no audible dissenters, the Senate voted to confirm the Cabinet secretaries for the Republican governor.

Sanders nominated secretaries for the departments of agriculture, commerce, corrections, education, human services, inspector general, military affairs, public safety and veterans affairs as well as the departments of energy and environment, finance and administration, labor and licensing, transformation and shared services, and parks, heritage and tourism.

The Arkansas Senate on Wednesday approved a resolution to allow the House of Representatives and the Senate to recess at the close of business today and reconvene Tuesday.

State law provides that out of respect to Dr. Martin Luther King Jr. and in observation of his birthday, neither the House or Senate shall convene in session nor shall any of their committees meet on the third Monday in January, which is Jan. 16 this year, according to HRC 1004.

Article 3, Section 28 of the Arkansas Constitution provides that neither chamber of the General Assembly may adjourn for more than three days without the consent of the other chamber.

The Arkansas House of Representatives on Wednesday voted to approve the general appropriation for the expenses of the judicial and legislative branches of government.

With Rep. Austin McCollum, R-Bentonville, voting present, the House voted 95-0 to send House Bill 1051 to the Senate for further action.

Joe Profiri. Deputy director of the Arizona Department of Corrections

Jacob Oliva. Senior chancellor for the Florida Department of Education

Shane Khoury. Currently serves as chief counsel for the

Allison Bragg. Spokeswoman and white collar coordinator for the U.S. Attorney's Office in the Eastern District of Arkansas

Brig. Gen. Jon Stubbs. Deputy director for operations, readiness and mobilization at the Department of the Army at the Pentagon

Mike Mills. Founder and owner of Buffalo Outdoor Center in Ponca. Served as state’s director of tourism from 1982 to 1986

NOTE: Sanders has not announced her nomination for secretary of the Department of Health