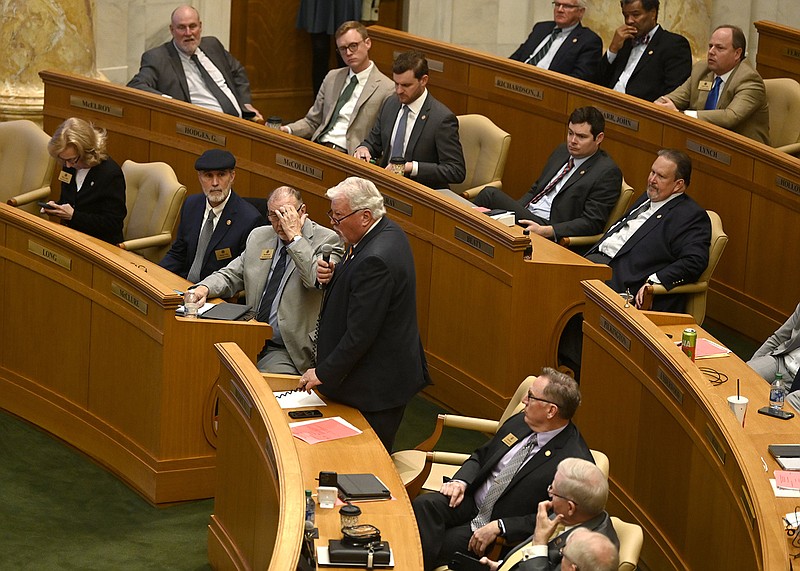 Arkansas Rep. Stan Berry, R-Dover, makes an announcement from his seat on the House floor at the state Capitol in Little Rock on Thursday. An earlier version of this caption incorrectly identified Berry’s hometown. (Arkansas Democrat-Gazette/Stephen Swofford)

The Arkansas Senate on Thursday voted to approve the general appropriation for the expenses of the judicial and legislative branches of government.

The Senate on Thursday approved an appropriation for the Senate's expenses in the 94th General Assembly for the fiscal year ending June 30, 2023.

The Senate voted 33-0 to approve Senate Bill 1, sending the measure to the House for further action.

The bill appropriates $675,000 for mileage allowance, per diem, maintenance and general operations and other expenses, $650,000 for employees' salaries, and $75,000 for employer matching funds.

The Senate on Thursday approved an appropriation for the House's expenses in the 94th General Assembly for the fiscal year ending June 30, 2023.

The bill appropriates $1.6 million for maintenance, operations and expenses, $311,500 for employees' salaries, and $57,000 for personal services matching funds.

The Arkansas House of Representatives voted 87-1-7 in favor of new rules for the 94th General Assembly on Thursday.

The rules the House approved closely match the rules from the previous session with some tweaks, most notably to how bills are scheduled for hearings in committees, Speaker Matthew Shepherd said.

The change approved by the House will now mean bills will automatically be assigned to a committee hearing. Under the previous rule, members had to contact committee chairs to schedule their bills for a hearing, which was adopted as a social distancing measure during the covid-19 pandemic, reducing the number of people who would attend a given committee meeting, Shepherd said.

"One of the things some members expressed was the concern under the covid rule put in place that it gave the chair too much power to determine if something even made it on the agenda," Shepherd said.

The new rules package also requires proposed legislation concerning state employ health benefits or higher education scholarships be introduced in the first 15 days of the session or have three-quarters support. The change also will require that any bill adding a new cost on state employee benefits have a fiscal impact statement. Shepherd said the changes are to align House rules with a state law the Legislature approved during the last session.