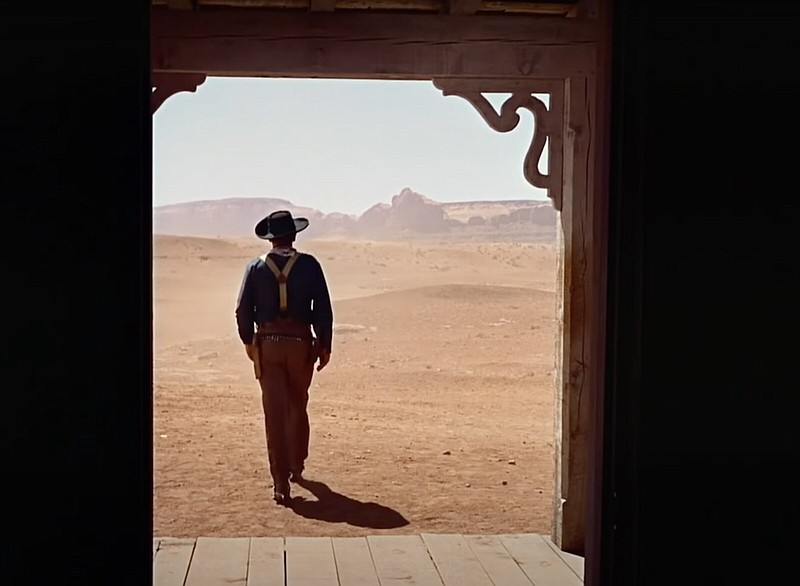 Money shot: John Ford convinced John Wayne to subvert his larger-than-life persona and Wayne gave the best performance of his career in the complex Western “The Searchers.”

With the revenge movie "The Old Way," Nicolas Cage has finally done a Western; at least he says it's his first.

I might have counted "Raising Arizona," the Coen Brothers' second movie, in which Cage played a hapless petty thief named H.I. McDunnough, driven by his desire to settle down and have a family to steal one of the quintuplets famously born to a rich couple.

McDunnough and his wife, Ed (Holly Hunter), have discovered that the prospects of the West -- forever America's final frontier -- are foreclosing on them in '80s America. "It wasn't easy with that sumbitch Reagan in the White House," McDunnough mutters in voiceover. "I dunno. They say he's a decent man, so maybe his advisers are confused."

"Raising Arizona" is a Western not simply because it's set in the West but because that West is -- as it is in every Western -- disappearing. It's being civilized and tamed; pianos are coming to the parlors.

In "Raising Arizona" it's notable that H.I. and Ed want that piano -- they want to step away from the outlaw lifestyle (though the only option the none-too-bright H.I. can imagine for obtaining this straight life is one last heist). Like a lot of the gunfighters and lonely men who populate our mythic West -- like Gregory Peck in "The Gunfighter" (1950) -- H.I. wants, more than anything, domestic tranquility. To be a citizen, to be a dad.

So "Raising Arizona" is a Western. So when Cage tells you the "The Old Way" is his first Western, don't believe him. He's just another unreliable artist.

They say they don't make many Westerns anymore, but that depends on how you look at it. I don't think Clint Eastwood ever made a film that wasn't in some respect a Western. You can argue the Coen Brothers make a lot of them. You can transpose the tropes into different keys, but the bittersweet song remains the same.

Robert Warshow was a critic who wrote for Commentary and The Partisan Review in the '40s and the '50s. He died in 1955 when he was 37 years old, but not before boiling his theory of aesthetics down to one true koan: "A man goes to the movies. The critic must be honest enough to admit that he is that man."

Warshow approached film criticism that way; he was anti-ideological and made himself available for the movies to work whatever magic they could muster on him. He's exactly the opposite of the writers who find movies like "Tár" problematic because they depict and court empathy for people who do horrible things.

He's one of my models, in part because I've never had any technical education in film production or theory, and don't think special knowledge is a requisite for writing about what one experiences while watching a movie. Warshow never forgot he was part of the audience as well as a performing writer. His writing is scholarly yet free of cant, and mindful of the sometimes unnerving power genuinely great movies have to make us feel things.

One of the most important pieces Warshow wrote is an essay called "The Westerner," which in some ways codifies and in other ways changes the way we think about cowboy movies forever. Warshow's chief insight is that the Western hero is not a sort of indomitable superhero working alone to bring justice and peace to a barbarous land, but a tragic figure, a failed man.

"The pictures ... end with his death or with his departure for some more remote frontier," Warshow wrote. "What we finally respond to is not his victory but his defeat."

Warshow died the year before John Ford's "The Searchers" was released, so he had no thoughts on what may yet be the greatest Western ever filmed. But John Wayne's Ethan Edwards -- likely the greatest character the Duke ever portrayed -- provided proof of concept for Warshow's theory.

Wayne -- like Lydia Tár -- is a problematic figure for a lot of reasons, but he was always a useful actor who commanded the screen, even when his buddy Ford was mocking him for his lack of a war record. (Wayne partisans to this day will claim he was kept out of the Army by FDR because he was too important to merely serve, or that he went on secret missions for the O.S.S. -- people will believe what they want, but there's no doubt Wayne was ashamed of himself, and it's possible a lot of his hawkish bluster during the Vietnam era was over compensation.)

Ford pushed Wayne into the dark depths of his traditional cowboy persona in "The Searchers," and Wayne delivers us a human monster.

In 1868, his Ethan Edwards is an unrepentant Confederate veteran who, after an eight-year-absence, turns up at the west Texas ranch of his brother Aaron (Walter Coy). Ethan has with him a stash of gold and a medal he may have earned while fighting in the Second Franco-Mexican War. We come to understand that his very presence has upset the equilibrium of the family. Aaron married the woman Ethan secretly loved.

Ethan is literally a man without a country -- "I figure a man's only good for one oath at a time. I took mine to the Confederate States of America," he tells garrulous neighbor Sam (Ward Bond), a preacher and a Texas Ranger.

Ethan and others are lured away from the farm by an Indian raid on a neighbor's cattle. They ride off and find the herd slaughtered, a diversion for a murderous attack on those left behind.

Ethan's discovery of the burned cabin influenced George Lucas, who visually quoted the scene when Luke Skywalker finds his aunt and uncle's smoldering home in "Star Wars. " For the most part, Ford keeps his camera on Wayne's face, a crazy mask reflecting the brutal scene. Ethan's brother is among the dead, as is his beloved sister-in-law. His nieces have been kidnapped.

Thus begins a five-year quest to find the girls, with Ethan leading a search party of bereaved young men. While they mean to ransom the captives, Ethan is interested only in vengeance. As the years go by, he becomes determined to kill his niece Debbie (Natalie Wood) because she's grown into a young woman and has no doubt been taken as a wife by one of the Comanche braves. Ethan sees it as an honor killing.

Meanwhile, Debbie's adopted brother Martin (Jeffrey Hunter) looks up to Ethan as a surrogate father but is determined to prevent his uncle from harming her. For his part, Ethan is initially dismissive of Martin. He considers him soft and inexperienced and a drag on the mission. But he eventually comes to admire his persistence. Despite having a good job and a fiancee waiting for him at home, Martin is determined not merely to find but to rescue Debbie.

And when they finally find the Comanche village where she is living, Ethan grudgingly goes along with Martin's plan to try to extract her from the camp before cavalry and Texas Rangers are called in.

"It's your funeral," Ethan says.

The choice for every Western hero from Huck Finn onward has been to light out for the (ever-shrinking, rapidly vanishing) territory or to die with your boots on at the hands of someone younger, quicker and more naive. Someone who still thinks it's all so romantic.