The nation in brief: On-duty police deaths declined in 2022 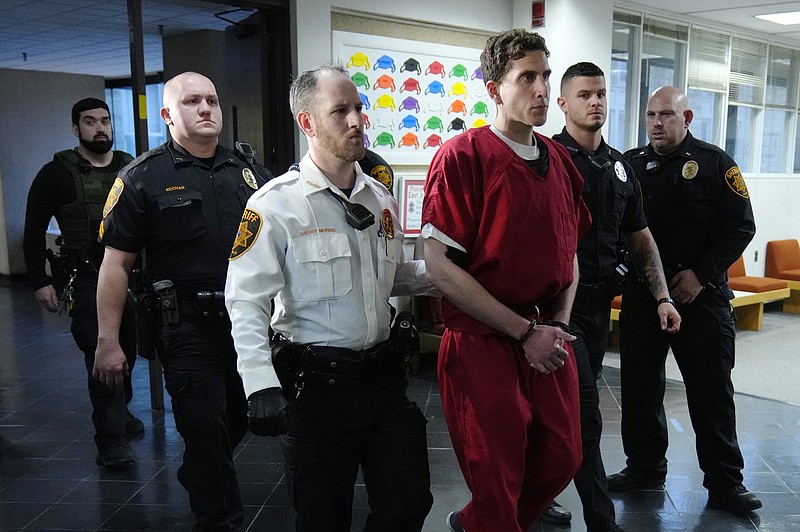 FILE - Bryan Kohberger, who is accused of killing four University of Idaho students, leaves after an extradition hearing at the Monroe County Courthouse in Stroudsburg, Pa., Tuesday, Jan. 3, 2023. Nearly two months after four University of Idaho students were killed near campus — and two weeks after a suspect was arrested and charged with the crime — the picturesque school grounds are starting to feel a little closer to normal. (AP Photo/Matt Rourke, Pool, File)

WASHINGTON -- Far fewer U.S. police officers died on the job in 2022 than a year earlier, mostly because of a drop in covid-19 deaths, though the number killed by gunfire remained relatively high, according to a report released this week.

Sixty-four of the 226 officers who died in the line of duty last year were shot, the National Law Enforcement Officers Memorial Fund said.

That matched the tally from 2021, with the shooting death figures from both years reflecting an increase in the average annual fatality toll over the past decade and an indication of a disturbing trend, said Bill Alexander, executive director of the National Law Enforcement Officers Memorial.

"We really do have some concerns about these numbers specific to firearms fatalities," Alexander said. From 2010 to 2020, by comparison, 53 officers on average were killed by gunfire each year.

The country has seen a rise in violent crime in recent years, especially from gun violence. Experts say potential factors include the pandemic, as well as civil unrest and fears about the economy.

The overall number of police deaths dropped by 61% in 2022 from an all-time high of 586 a year earlier, as reduced coronavirus infection rates and the widespread availability of vaccines meant fewer officers died from covid.

However, the virus remained the No. 1 killer of police last year.

There was also an increase in fatalities related to vehicle crashes. Forty officers died in crashes last year, an increase of nearly 30% from 2021.

Lawmaker responds to calls to resign

U.S. Rep. George Santos on Thursday cryptically promised to step down from Congress over his string of false claims "if 142 people ask me to resign."

It wasn't clear what the embattled New York Republican meant, and the statement sparked instant petition drives and moves by fellow lawmakers to build even more pressure on him to quit.

Santos, 35, shouted the response to a scrum of reporters as he ducked into an elevator at the Capitol.

The only way for Santos to be forced out of office would be if two-thirds of the entire House vote to expel him. Two-thirds of the Republican caucus is 148, suggesting Santos may have misunderstood that edict.

He won about 148,000 votes in his 2022 election victory in New York's 3rd Congressional District, the Democratic-leaning Long Island district he flipped in one of the bigger upsets of the midterms.

JACKSON, Miss. -- Brandon Presley, a Democrat in his fourth term as a Mississippi utilities regulator, announced Thursday that he is running for governor this year, saying he believes state government and the Republican governor are disconnected from the needs of working people.

"When you're more concerned about how much campaign money you can raise than you are with how you can raise the quality of life for the people who are the owners of state government, there's something bad screwed up," said Presley, 45, a distant cousin of Elvis Presley.

Gov. Tate Reeves, 48, last week filed papers to seek a second term. He is the only Republican in the race so far. Bill Waller Jr., a former state Supreme Court chief justice who lost to Reeves in the 2019 GOP primary for governor, has said he is considering another run.

Presley will face at least one candidate in the Democratic primary. Gregory Wash ran a low-budget race for governor in 2019 and has filed to run again.

A Christian boarding school in Missouri that's been under scrutiny over abuse allegations announced Wednesday that it will close because of financial hardship.

Agape Boarding School in Stockton has been the subject of state and local investigations and several lawsuits from former students. The school for boys said it will stop providing service Jan. 20.

Attendance at Agape plummeted after abuse allegations surfaced. It had 132 students 13 months ago, said its lawyer, John Schultz. It now has 12.

The school's focus now is "on getting the boys who remain in the program safely transitioned to their parents or to foster care, other group homes or residential programs," said former director Bryan Clemensen.

He said the decision to close "is voluntary and solely due to the lack of financial resources to continue caring for the boys."

Agape's trouble began in 2020 when former students came forward with abuse allegations. One said he was raped and called "seizure boy" because of his epilepsy. Others said they suffered permanent injuries from being disciplined or forced to work long hours of manual labor.

Allegations of physical and sexual abuse at Agape and Circle of Hope Girls' Ranch prompted a state law in 2021 requiring oversight of such facilities. Missouri previously had virtually no oversight for religious boarding schools.