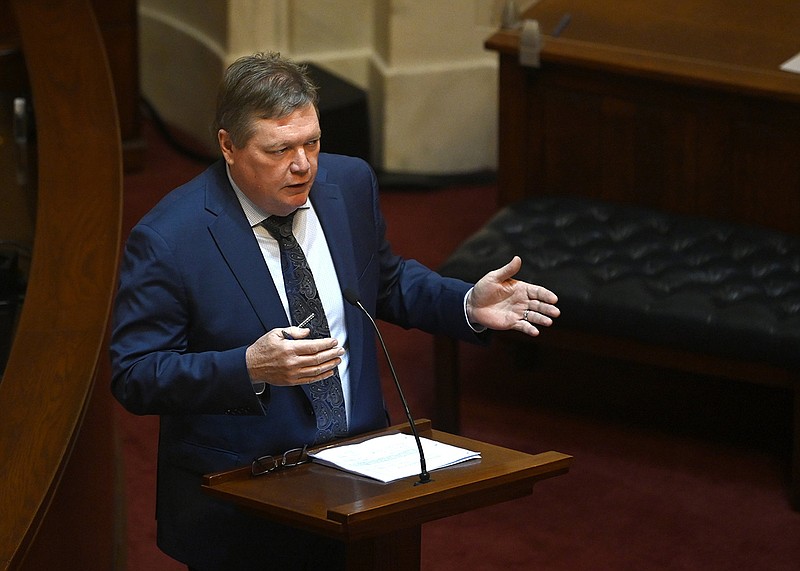 In voice votes, the Senate handily defeated the proposals made by Sen. Bryan King, R-Green Forest.

The action came after King declined the request of Senate Republican leader Blake Johnson of Corning to pull down his proposed rules changes to allow the Senate Republican Caucus to consider the proposals first. The Senate includes 29 Republicans and six Democrats.

King said he first brought up his proposals to senators during the Senate's orientation last month.

King proposed a Senate rule change that would bar a senator "who owes state back taxes of any kind" from claiming per diem reimbursement.

He told senators that any senator who owe state taxes should be required to use his or her per diem reimbursements to pay back the state all the taxes they owe.

Under King's proposal, a senator may restore his or her right to claim and receive prospective per diem payments only if the senator provides the secretary of the Senate with written documentation verifying that the back taxes have been paid in full, or that the senator has formally engaged in a state-approved tax payment plan. If a senator's right to claim per diem is restored under a tax payment plan, all subsequently claimed per diem shall be applied toward the satisfaction of the back taxes still owed until payment has been made in full under the proposal.

"A Senator shall not be entitled to recover any past per diem forfeited as a result of unpaid back taxes," under King's proposal.

Sen. Kim Hammer, R-Benton, questioned the constitutionality of the proposed Senate rule change and whether it would better to propose the rule as a bill to cover the Senate and the House.

King said he understands that state Department of Finance and Administration can garnish anything, so he doesn't think there is any legal problem with the proposed Senate rule, and a proposed bill could be defeated in the House.

"As senators, if we we are going to walk in here, we need to make sure we pay taxes first," he said.

Sen. Jimmy Hickey, R-Texarkana, said senators generally agree with the premise of what King is trying to do.

But he said he would prefer for the proposed rule to be in the form of a bill so it would cover both the House of Representatives and the Senate, and target senators' salaries to repay the state for back taxes, and give lawmakers time to set up a payment plan with the state Department of Finance and Administration.

King also proposed a Senate rule change stating that "A Senator shall be prohibited from placing more than one bill per day on the Senate Business Calendar."

King said "this will slow down the process" and wouldn't apply to budget bills.

He said his proposed rules change is aimed at making sure the Senate "is not batching bills" together during the last few weeks of the session to be approved in one vote.

"You have to vote for [a bill] before you know what's in it," King said, and "rubber stamping is not a good way to do government."

But Sen. Jonathan Dismang, R-Searcy, said he doesn't want to take authority away from any senator and the House is not under a similar restriction. A senator has the authority to pull each bill out of any batch of bills for a separate vote, he said.

Sen. John Payton, R-Wilburn, said he worried the proposed rule change would lead senators to combine several bills into a single omnibus bill and he doesn't like omnibus bills.

These revisions add additional potential sanctions for senators who are found to have violated the Senate's code of ethics.

The potential sanctions include a reprimand and/or financial penalties, including loss of salary, imposition of punitive damages, and loss of per diem and mileage reimbursements under the revised rules.

The Senate's ethics rules already allowed the Senate to sanction a senator found to have violated the Senate's code of ethics with a letter of caution, loss of committee assignments, loss of leadership assignments, loss of seniority, temporary suspension, expulsion and other measures to be determined by members of the Senate. The previous rules didn't mention the loss of per diem and mileage reimbursements. A two-thirds vote of the Senate is required to suspend or expel a senator.

The revisions of its ethics rules also make it clear what portions of the Senate Ethics Committee's meeting to consider an ethics complaint against a senator are open to the public and what parts of the meeting are held in a private executive session.

Under the revised ethics rules, the Senate Ethics Commission "shall convene in public in order to state the purpose of the meeting and the procedures to be followed by the Committee, but shall take all evidence and hold all deliberations in executive session."

The committee "shall reconvene in public meeting to take action on the allegations in the petition," under the revised ethics rules, and "Members of the public shall be allowed to observe the public portions of the committee hearing."

The Senate also approved an ethics rule change proposed by Dismang to make it a violation of the Senate's ethics rules for any senator to accept a pledge for a campaign contribution for all offices, except an election for United States representatives, during the period beginning 30 days before and ending 30 days after any regular session as well as during any extended session or special session.

The Senate's ethics rules already bar senators from accepting a campaign contribution for all offices, except for United States representative, during the period beginning 30 days before and ending 30 days after any regular session as well as during any extended session or special session.

Dismang said he proposed the rules change after a senator created a website to accept campaign contributions in the future in an effort to skirt the Senate's ethics rules.

In June of 2018, the Senate approved an overhaul of its rules to create a committee on ethics, prohibit senators from certain activities involving conflicts of interest and require more disclosure of other conflicts and their personal finances.

A senator who is found guilty or pleads guilty to felony charges and certain other offenses is prohibited from serving under Article 5, Section 9, of the Arkansas Constitution. 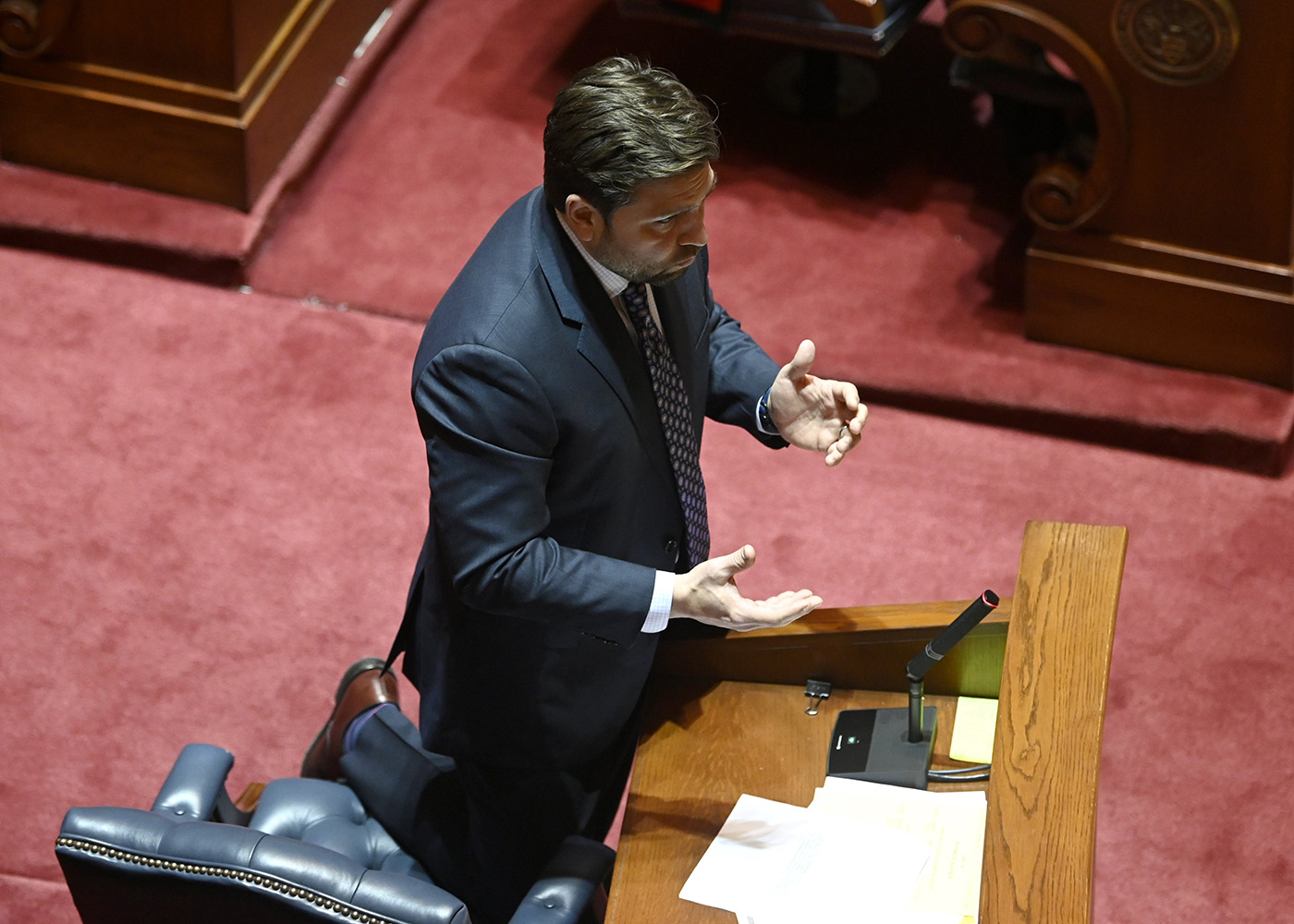 Sen. Jonathan Dismang, R-Searcy, asks a question during the Senate session on Thursday at the state Capitol in Little Rock. (Arkansas Democrat-Gazette/Stephen Swofford)