Majority of Cabot churchgoers walk away from United Methodist Church 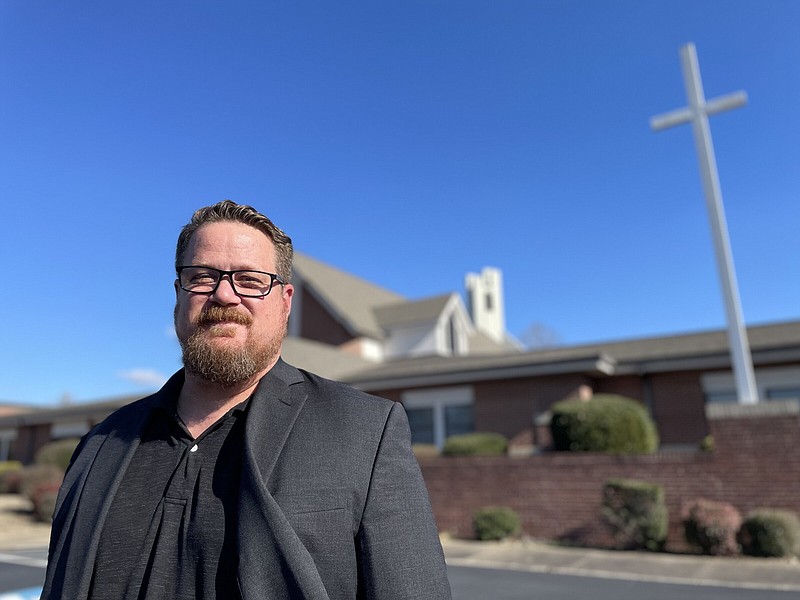 CABOT -- In November, members of the Arkansas Conference of the United Methodist Church derailed plans by three churches to break away from the denomination, refusing to ratify disaffiliation agreements backed by super-majorities in each congregation.

Members of a third, Cabot United Methodist Church, opted instead to walk away from their longtime house of worship and start over.

On Christmas, the congregation's longtime pastor, Stephen Dickinson, worshipped for a final time at the church on South Pine Street. One week later, Dickinson and most of the leadership launched a new congregation, Cabot Methodist Church, gathering to worship at the Cabot Freshman Academy.

On Sunday at 9 a.m., Cabot Methodist had 320 people in attendance, with children running about and enough donuts and coffee to feed a small army.

At the old church, the choir loft was empty; most of its members have resigned. Nor was there a need to fire up the organ; the organist no longer worships there. With no one left to run the sound system, the microphones didn't always work. Services, for the time being at least, are no longer livestreamed.

Despite the challenges, at least one key burden has been lifted. A Cabot community member, who wishes to remain anonymous, has donated enough money to pay off the congregation's mortgage and to help with expenses until a replacement for Dickinson has been selected, conference officials announced.

In a written statement, the conference's new bishop, Laura Merrill, welcomed the news.

"The gift the church has received for our work in Cabot is a tangible sign of hope during a difficult time, and I praise God for the giver's generosity. I look forward to our next steps together," she said.

Under a provision in the United Methodist Church's Book of Discipline that was added in 2019, U.S. congregations can disaffiliate "over issues related to human sexuality." It takes a two-thirds vote by the congregation to do so.

The rule, known as Paragraph 2553, was passed at a special session of the denomination's General Conference, which also reaffirmed its ban on same-sex marriages and the ordination of "self-avowed, practicing homosexuals."

As originally passed, Paragraph 2553 did not make ratification by annual conference a prerequisite to disaffiliation. The requirement was added after the denomination's Judicial Council determined it was necessary to comply with the denomination's constitution.

With nearly 79% of the congregation voting to disaffiliate, most Cabot United Methodist Church members believed ratification would be a formality, as it has been elsewhere in the country. Thus far, more than 2,000 churches have been allowed to leave.

In Cabot, those opting to remain United Methodist assumed they'd soon be spiritually homeless. The congregation's associate pastor, Steve Wilson, brought moving boxes to the building, prepared to pack up and leave.

Soon thereafter, Dickinson, the congregation's pastor for the past 7 1/2 years, announced he would be resigning. Wilson and his moving boxes would stay, at least for now.

Dickinson said 90% of the church's active members had wanted to sever ties with the denomination, but said disaffiliation opponents had done a good job of rallying their forces.

"They brought in people [to vote] that haven't been in church in 10 years. I mean, I didn't know some of the people there, but they were on the rolls," he said.

Even so, the vote to leave had been nearly four-to-one.

Rather than stay and fight, Dickinson preferred to make a clean break.

"We followed the process," he said. "We respected that decision."

For Dickinson, remaining wasn't an option.

"My wife and I already talked about it, prayed about it. We knew what God was calling us to do," he said.

Rather than dwelling on the past, Dickinson is focused on the future.

Thus far, the new church is "going great," he said.

"There's always excitement around something new," he said.

It's also an opportunity "to lean on the God we say we trust," he said. "We're just trying to be obedient, trying to be faithful and see where God takes us."

His hope is that more people will hear the gospel as a result.

"All the research shows that new churches reach new people," he said. "We're going to try to reach new people for the cause of Christ and get them connected so they can find new life in Christ."

Harriet Meadows is among those who chose to remain. She voted for disaffiliation when it seemed inevitable, noting on her ballot that she was doing so "under much heartbreak and protest," she recalled.

After the disaffiliation agreement was rejected, she decided to stay.

"This is my home. My husband was a part-time local pastor here, my daughter was baptized, she was confirmed and she was married in this very church. My husband had his funeral here nine years ago," she said. "My heart and soul are right here, and this is where I'll abide until I join him."

Following the church split, she was one of only five choir members who were left, she said.

"When I said goodbye to them three weeks ago, I just cried because it was like I was losing family," she said. "Nobody wins in division. Nobody but the devil wins."

Despite the pain, she's hopeful for the future. So far, 16 people have already expressed interest in joining the choir, she said. A University of Central Arkansas student agreed to play the piano. She's hopeful that they'll find an organist in short order.

There is now "a new spirit in this church. It's a new day," she said.

Michael Roberts, director of the newly created Arkansas Conference ReStart Initiative, is working with the remnant in Cabot as well as loyal United Methodist members in Jonesboro, Searcy and elsewhere. United Methodists in both of those communities are now holding worship services, temporarily, in Presbyterian churches, he said.

He's encouraged by what he has witnessed, thus far, in Cabot, he said Sunday.

"As you can see, we're starting with a good core group of people, people who have been a part of this congregation and who believe in this vision," he said.

They are eager to be "part of a global church that does mission around the world and [is] focusing on welcoming everyone with less judgment and more compassion," he said. "I just believe it's going to take off ... and be a great blessing to this community."

Afterward, he said the split has been "horrible" for the congregation but expressed hope that better days lie ahead.

"Biblically, churches split and more people come to know Christ [as a result]. So that's not a bad thing," he said. "My hope is that their church explodes and that there's twice as many people in it in six months as there are right now. And my hope is the same thing happens here. Because, for the kingdom, that's the best thing that could possibly happen."

Dickinson is also rooting for the congregations around him to succeed.

The gospel, he said, "has the power to change us. The Holy Spirit comes in, when you start believing and acknowledging and accepting, and your life is transformed to where you're just full of joy and excitement and love."

"I believe the local church is the light of the world, so my prayer is that God is going to use every single local congregation for His glory," he said.