‘Dores optimistic with Hogs in town 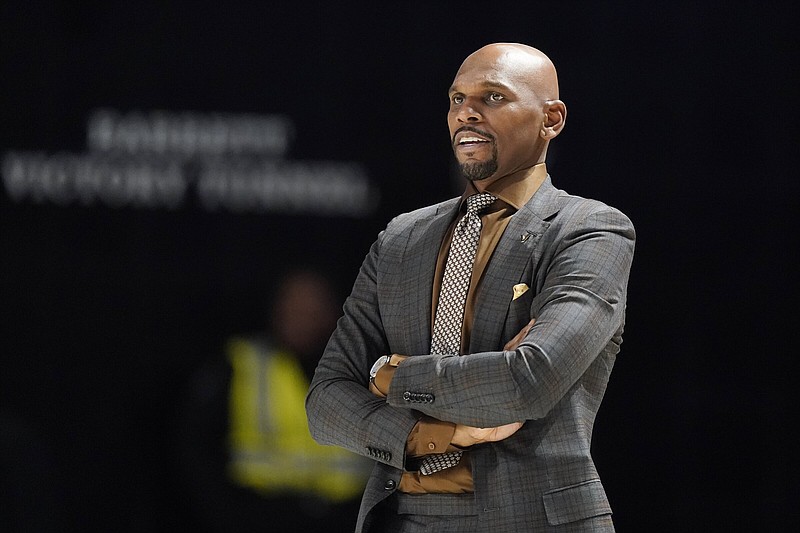 FAYETTEVILLE -- Vanderbilt's basketball team is looking to one-up the University of Arkansas when it comes to playing consecutive games against nationally-ranked opponents.

The No. 15 Razorbacks (12-4, 1-3 SEC) finished a run of three consecutive games against ranked teams with No. 4 Alabama's 84-69 victory over Arkansas on Wednesday night in Walton Arena.

Vanderbilt (8-8, 1-2 SEC) is playing four games in a row against ranked teams, including 1 p.m. Central today when the Commodores face Arkansas at Memorial Gymnasium in Nashville, Tenn.

Today's game televised on ESPNU will be Vanderbilt's third consecutive against a ranked opponent with the fourth on Tuesday night when Alabama visits Memorial Gymnasium.

"We feel like we're a pretty good team, too," Vanderbilt Coach Jerry Stackhouse said when he met with media members before practice on Thursday. "We've been giving ourselves a chance.

"We've just got to be a little sharper in our execution, a little tougher on our rebounding and make a few more shots to give ourselves a chance to win some of these close games that we've lost. I think our guys feel good about how we're playing for the most part."

Today will be Vanderbilt's first home game since Jan. 3 when the Commodores beat South Carolina 84-79 in overtime. Vanderbilt is 6-3 at home with the losses to Memphis, Southern Mississippi and Grambling.

"It's good to get back home," Stackhouse said. "Hopefully we'll have a big crowd in here. Our students are back, so we're excited about the opportunity we have over the next couple of games."

"Liam is probably playing at an All-SEC level," Stackhouse said.

The Commodores led 39-37 at halftime at Tennessee before the Vols took over in the second half.

The Commodores had eight turnovers at Tennessee.

"Every time we play them, it's a grind," Barnes said. "I know our guys have terrific respect for them."

"You look at Liam Robbins, he did a lot of things," Barnes said. "He got the ball where he wanted it, for the most part, and finished it."

The Commodores are 98-257 all-time against ranked teams. Their most recent victory was last season when they beat No. 25 LSU 75-66 in Memorial Gymnasium.

"I think we're right there," Manjon said Thursday about getting another opportunity to beat a ranked team. "I think we're showing flashes every game. It's about putting a full game together."

Arkansas beat Vanderbilt 92-71 at Memorial Gymnasium two years ago for the Razorbacks' sixth consecutive victory over the Commodores in Nashville. That streak includes four victories at Memorial Gymnasium (2014, 2017, 2019 and 2021) and two in the SEC Tournament at Bridgestone Arena (2017 and 2020).

Vanderbilt last beat Arkansas in Nashville in 2013, but the Commodores were the only visiting team to win in Walton Arena last season when they upset the Razorbacks 75-74. Among current Commodores who played in that game, junior guard Trey Thomas scored 15 points, Wright 12 and junior forward Myles Stute 8.

"Vanderbilt is playing great," Arkansas Coach Eric Musselman said on the Razorbacks' postgame radio show after the Alabama game. "They compete. I thought they played Tennessee very well. Although they lost, they really competed.

"Coach Stackhouse does a very good job. One of the most difficult teams you have to prepare for."

Stackhouse and Musselman both have pro backgrounds.

After starring at North Carolina, Stackhouse played in the NBA for 18 seasons, then was an assistant coach for the Toronto Raptors and Memphis Grizzlies and the head coach for the Raptors' G League team.

Musselman was an NBA head coach for the Golden State Warriors and Sacramento Kings, an assistant for four NBA teams and a long-time head coach in the CBA and G League, formerly the Developmental League.

When Musselman was hired by Golden State, he and the late Bill Musselman became the first father and son to be NBA head coaches.

"I think he has a pro mentality," Stackhouse said of Musselman's approach. "If you can't guard, he's going to try to attack you.

"You know if their player is coming after you, then [Musselman] thinks you're a bad defender. That's a challenge you have to take.

"If you're having to continually guard in isolation situations, then it's purposeful. It's not just a play that he decided to run. He's going to try and attack with matchups.

"That's a little bit different than probably what you see in a lot of college games, where it's mostly continuity and you try to take the best shot available or you try to punch it inside."

"They've got a 6-7 point guard in Black who does a lot for them. Council has been one of the best players in the SEC this year. He's able to get downhill.

"They have athletes that can finish around the basket. It's what we see most nights in the SEC.

"We feel we'll have a good game plan to try and guard them and do some things that give them problems guarding us."

NO. 15 ARKANSAS AT VANDERBILT