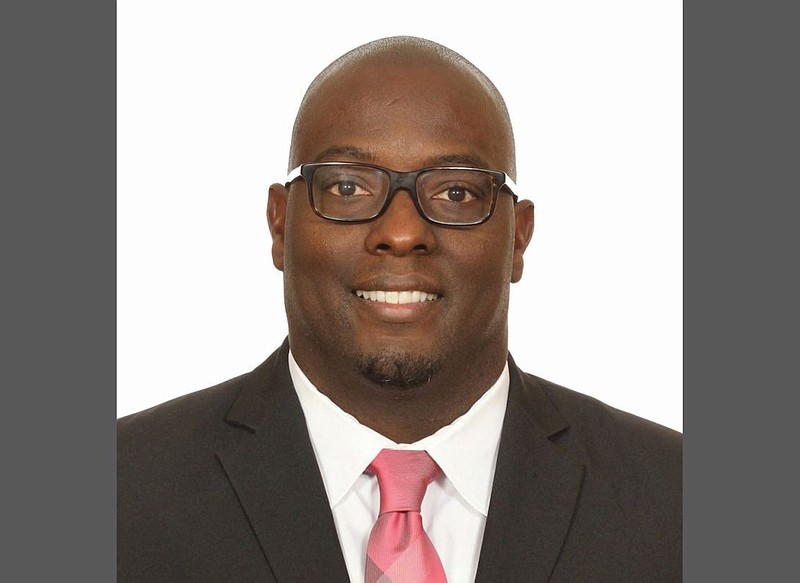 Alonzo Hampton is shown in this undated courtesy photo. Hampton was announced as the head football coach at the University of Arkansas at Pine Bluff on Thursday, Dec. 22, 2022,

New University of Arkansas at Pine Bluff football Coach Alonzo Hampton will be paid $165,712 annually under a three-year contract that went into effect Dec. 22.

A copy of Hampton's contract has been provided to The Commercial via state Freedom of Information Act request. The contract will expire Dec. 31, 2025.

Hampton will be formally introduced during a news conference at 1 p.m. Tuesday at the UAPB STEM Building. According to terms of the deal, he is being paid an annual salary based upon the line-item maximum salary "established by legislative appropriation acts" and will be paid amounts over the salary solely from private funds and those generated by apparel, athletic apparel, shoe and multimedia rights vendors.

Hampton can receive incentives ranging from $1,000 for a cumulative team grade-point average of 3.0, to $3,000 for being named Southwestern Athletic Conference Coach of the Year, to $5,000 for a team GPA of 3.25, winning 10 games in the regular season, winning the SWAC Western Division championship or winning either an NCAA-sanctioned bowl, the Celebration Bowl or the NCAA playoff championship. SWAC championship game winners are invited to the Celebration Bowl, but a SWAC team may be selected for the playoffs.

Hampton will not receive an increase, incentive or term extension if:

• a Level I or II NCAA violation is attributed to him;

• UAPB is on probation for any NCAA violations attributed to him;

• he voluntarily resigns from UAPB;

• he is placed on leave, suspended or disciplined for a violation of school policy or "applicable law;"

• he is terminated with cause;

• he fails to timely report any alleged NCAA or Title IX violations;

• or he has been notified by UAPB that he has breached the contract.

A written evaluation of Hampton will be conducted within 30 days after the end of the 2023 season and be forwarded to the chancellor within 10 business days of discussion.

Hampton can be fired with cause for:

• "Knowing participation in significant or repetitive violations of the NCAA or SWAC constitution, by-laws, rules, regulations, or interpretations thereof by the NCAA or SWAC;

• "Authorizing or knowingly failing to report a major violation" of the NCAA or SWAC policies, or university athletic interests;

• being charged with a crime under federal or state law, excluding minor traffic offenses;

• "Prolonged absence from duty" without permission;

• "Engaging in unreasonable conduct with respect to the welfare and safety of University student-athletes ..."

• and "Otherwise engaging in conduct, as solely determined by the University," contrary to the character and responsibilities of a head football coach or negatively or adversely affecting the reputation of the university or its athletic programs.

If Hampton is terminated for convenience, he will be paid an amount equal to 50% of the salary he would have earned between the date of termination and the earlier of six months following the date or the end of the contract, unless both parties otherwise agree. If he resigns before the contract ends, he will be required to pay a lump sum of 50% of the salary he would have earned under the same terms.

Kayvon Britten, the recent UAPB running back who was second in the SWAC in rushing yards, has committed to playing at Tarleton State University in Texas for the 2023 season.

Britten led the Golden Lions with 1,063 yards and scored the winning touchdown in their season finale last Thanksgiving, a 19-14 win over Alabama State University. Britten rushed for three touchdowns in that game to end the season with a conference-leading 16.

Britten announced his decision to transfer from UAPB on Nov. 29 and indicated his commitment to Tarleton on Monday. He was among a long line of players from Gamble's native Ohio who suited up for the Lions.

Tarleton, located southwest of Fort Worth in Stephenville, transitioned from Division II to Division I in 2020 and competes in the Western Athletic Conference. The Texans went 6-5 and 1-3 in the WAC.