Czech president vote goes for round 2 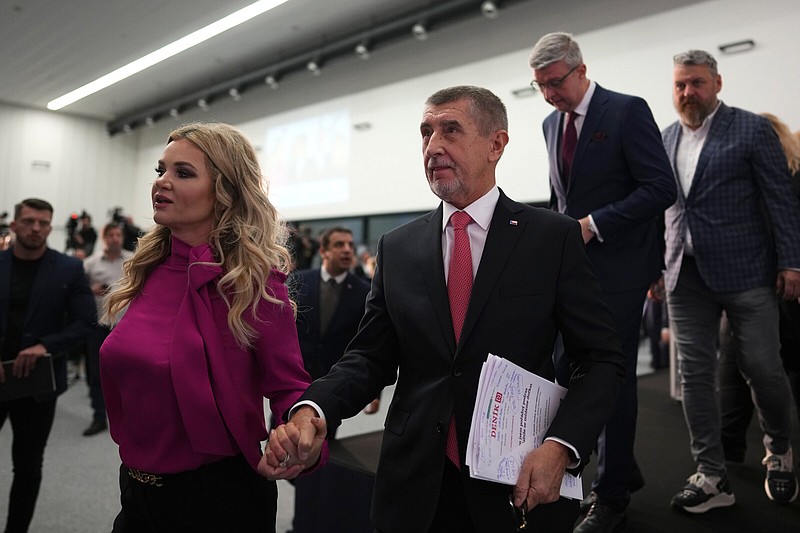 Presidential candidate Andrej Babis accompanied with his wife Monika leaves the stage after addressinng media after the preliminary results for the first round of presidential election in Prague, Czech Republic, Saturday, Jan. 14, 2023. (AP Photo/Petr David Josek)

PRAGUE -- Retired army Gen. Petr Pavel narrowly edged populist billionaire Andrej Babis in the first round of the Czech presidential election to set up a runoff vote between the political newcomer and the former prime minister.

Pavel and Babis advanced to a second round of voting because none of the eight candidates seeking the country's largely ceremonial presidency received a majority of votes in the initial round, which was held on Friday and Saturday.

With the ballots from 99.9% of the polling stations counted by the Czech Statistics Office, Pavel had 35.39% of the vote compared with 35.00% for Babis.

"It's such a close result that I can already see the hard work for us ahead of the second round," Pavel said. "Every vote will count."

Pavel is a former chairman of NATO's military committee, the alliance's highest military body. He fully endorsed the country's military and humanitarian support for Ukraine in its fight against Russia and sees the Czech Republic's future linked to membership in the European Union and NATO.

Babis said he was delighted with the result, which was more than the 27.1% that his centrist YES movement received in the 2021 general election.

"It's absolutely great," he said.

Babis congratulated Pavel on his victory, but immediately went on the attack against his opponent.

"I don't understand why he's running," he said, stressing Pavel's past as a soldier and a Communist Party member.

The Slovakia-born Babis was, however, a member of the Communist Party before the 1989 Velvet Revolution that brought in democracy and faces accusations of cooperating with the communist-era secret police in his native country.

Another of Babis' challengers, Danuse Nerudova, who was rector of Mendel University in Brno, finished third with 13.9%, while conservative former diplomat Pavel Fischer was fourth with 6.8%.

Nerudova and Fischer pledged support for Pavel in the runoff in two weeks.

Czechs are picking a successor to Milos Zeman whose second and final term expires in March.

Under the Czech Constitution, the president picks the prime minister after a general election, one of the office's key responsibilities. The president also appoints members of the Central Bank board and selects Constitutional Court judges with the approval of Parliament's upper house.

Otherwise, the president has little executive power since the country is run by a government chosen and led by the prime minister.

Babis, 68, was acquitted last week in a fraud trial, which boosted his chances in the election.

A court in Prague acquitted him Monday of fraud charges in a $2 million case involving EU subsidies. The prosecution can still appeal. Babis had pleaded not guilty and repeatedly said the charges against him were politically motivated.

Despite a number of scandals, his support remains strong, particularly among older voters.

Babis ended up in opposition after losing the 2021 general election. He's supported by Zeman, with whom he shares euroskeptic views and using anti-migrant rhetoric.

During his campaign, Babis tended to avoid the subject of the war in Ukraine, saying he wants to focus on domestic issues, including high inflation for which he blames the current five-party ruling coalition led by conservative Prime Minister Petr Fiala. He also said he'd like to organize an international summit about peace in Ukraine in Prague if he's elected.

Zeman was the first president elected by popular vote. His second and final five-year term expires in March.

The websites of the Statistics Office and the one it uses to release election results were under cyber attacks from a pro-Russia group, the Avast antivirus company said. The results were still available.

Voting in the Czech presidential election at the Czech Embassy in Ukraine's capital, Kyiv, had to be interrupted for an hour because of a Russian missile attack earlier Saturday, the Czech Foreign Ministry said.