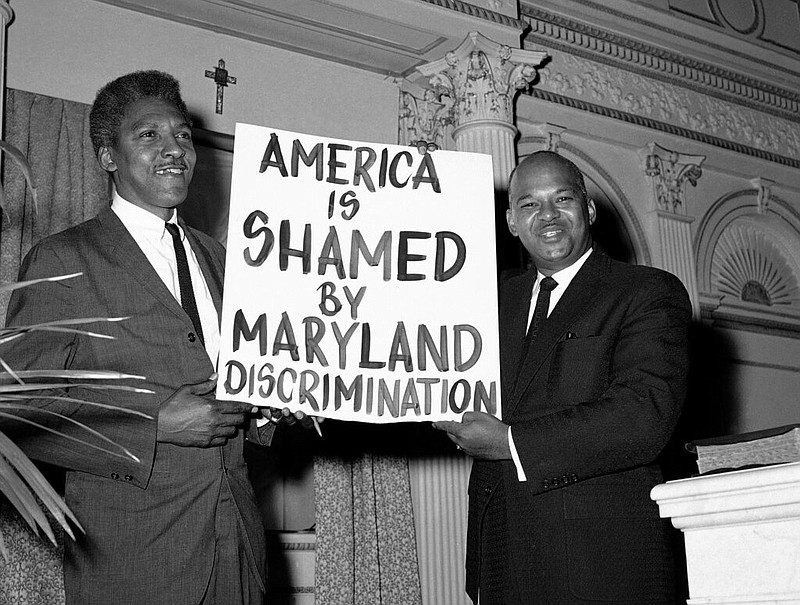 Bayard Rustin (left) of New York City and the Rev. Logan Kearse of Baltimore pose at Kearse's church in this Nov. 18, 1961 file photo. The two were showing one of the signs carried by demonstrators who staged sit-ins at Baltimore restaurants to protest segregation. Rustin was the former secretary to the Rev. Martin Luther King Jr., and Kearse's Cornerstone Baptist Church was the starting point for the Baltimore sit-ins. (AP/William A. Smith)

A new film screening series will debut at Philander Smith College in Little Rock this week, showing films that illuminate the Black experience.

The series is designed to unite students and communities through the films. Each event will feature a historical or contemporary film and leave room for dialogue, reflection and the opportunity to explore issues relevant to the world today, according to a news release from Arkansas PBS, a partner with the college, for what they are calling the Philander Forward Film Series.

Admission is free and open to students, faculty and the public.

The opening film is a selection from "The U.S. and the Holocaust," scheduled for 6:30 p.m. on Wednesday at Philander Smith College, Room BA 101, 900 W. Daisy L. Gatson Bates Drive, Little Rock, in recognition of International Holocaust Remembrance Day. The United Nations General Assembly designated Jan. 27, the anniversary of the liberation of the Auschwitz-Birkenau concentration and extermination camp, as International Holocaust Remembrance Day.

The screening will feature clips from "The U.S. and the Holocaust," a three-part documentary directed and produced by Ken Burns, Lynn Novick and Sarah Botstein. The film examines the rise of Hitler and Nazism in Germany in the context of global antisemitism and racism, the eugenics movement in the United States, and race laws in the American South. The series sheds light on what the U.S. government and American people knew and did as the catastrophe unfolded in Europe, becoming one of the greatest humanitarian crises in history.

Updates and additional information will be available at myarkansaspbs.org/events.