Funeral held in Vatican for cardinal critical of Francis 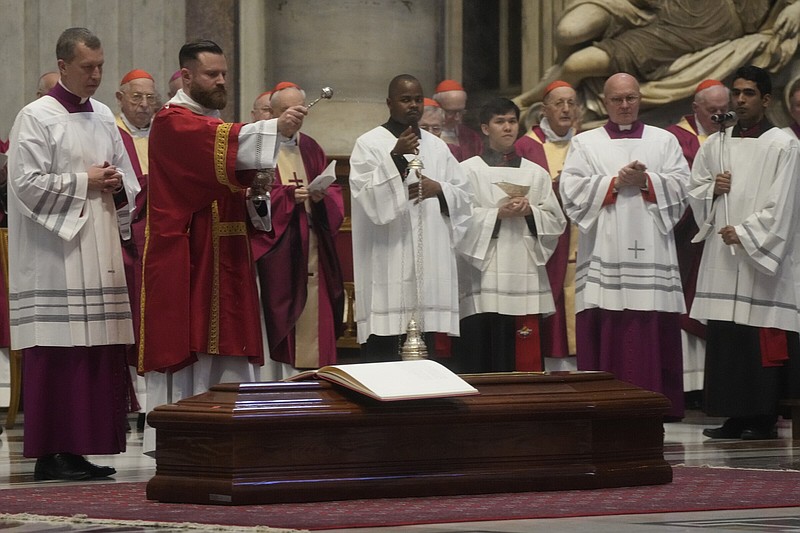 The coffin of Australian Cardinal George Pell is blessed during the funeral ceremony in St. Peter's Basilica at the Vatican, Saturday Jan. 14, 2023. Cardinal Pell died on Tuesday at a Rome hospital of heart complications following hip surgery. He was 81. (AP Photo/Gregorio Borgia)

VATICAN CITY -- The Australian cardinal who decried the papacy of Pope Francis as a "catastrophe" was given a funeral Saturday and hailed by some fellow churchmen at St. Peter's Basilica, with the pontiff imparting a final blessing for the once high-ranking Vatican prelate.

Cardinal George Pell, 81, died Jan. 10, shortly after undergoing hip surgery in a Rome hospital. As the Vatican's finance minister for three years, Pell had been a key player in the early years of Francis' papacy.

Pell later returned to his native Australia to be tried on child sex abuse charges over allegations that he molested two choirboys while he was archbishop of Melbourne. He served more than a year in solitary confinement in prison before an earlier court conviction was overturned in 2020.

As is customary for funerals of cardinals, a final blessing, delivered in Latin, in the form of a prayer for mercy and eternal rest, was recited by Francis, who, in a wheelchair, passed by Pell's plain wooden coffin.

The funeral Mass was celebrated by an Italian cardinal, Giovanni Battista Re, in his role as Dean of the College of Cardinals.

Re praised Pell as a "man of God and man of the Church," who was distinguished for "a deep faith and great solidity of doctrine, which he always defended without wavering and with courage."

"As he noted many times, he was pained by the weakening of faith in the Western world and the moral crisis of the family," Re said in his homily.

Re noted how nine days earlier, Pell, "apparently in good health," had concelebrated, in St. Peter's Square, the funeral Mass for Francis' predecessor, Pope Benedict XVI, who died Dec. 31, after nearly a decade in retirement.

Right after Pell's death, it was revealed he authored the memo that had been circulating for many months in church circles. In the memo, Pell had lamented that the current papacy as a "disaster" and a "catastrophe."

Separately, the day after Pell died, a conservative magazine published what it said was an article by the cardinal decrying as a "toxic nightmare" Francis' determination to sound out Catholic laity on such issues as church teaching on sexuality and the role of women.

In the homily, Re lamented that Pell's final years had been "marked by an unjust and painful conviction."

"It was an experience of great suffering sustained with faith in the judgment of God," Re said.

The cardinal cited the diaries Pell wrote while in prison "with the aim of making known how much faith and prayer help in the difficult moments of life and [how they can] also be a support to who must unjustly suffer."

Among the concelebrants at the altar Saturday was German Archbishop Georg Gaenswein, another high-profile Vatican prelate who in recent days had blasted Francis' leadership of the Roman Catholic Church.

Gaenswein -- a staunch advocate of the church hierarchy's more conservative faction and longtime aide of Benedict -- complained about how he was treated by Francis after Benedict retired in 2013 and Francis was elected as pontiff.

Gaenswein unleashed a torrent of criticism of Francis in interviews hours after Benedict's death in a monastery on the Vatican grounds, where the retired pontiff had lived out his last year and in a book published days later.

"Now he is in full redemption" after death, said Mueller, who was dismissed by Francis after a brief term as the Vatican's chief of its doctrinal orthodoxy office.

Information for this article was contributed by Luigi Navarra of The Associated Press.