Hidden Gems: In ‘All Eyes on the Sky,’ genocide expert uses fiction to tell real stories 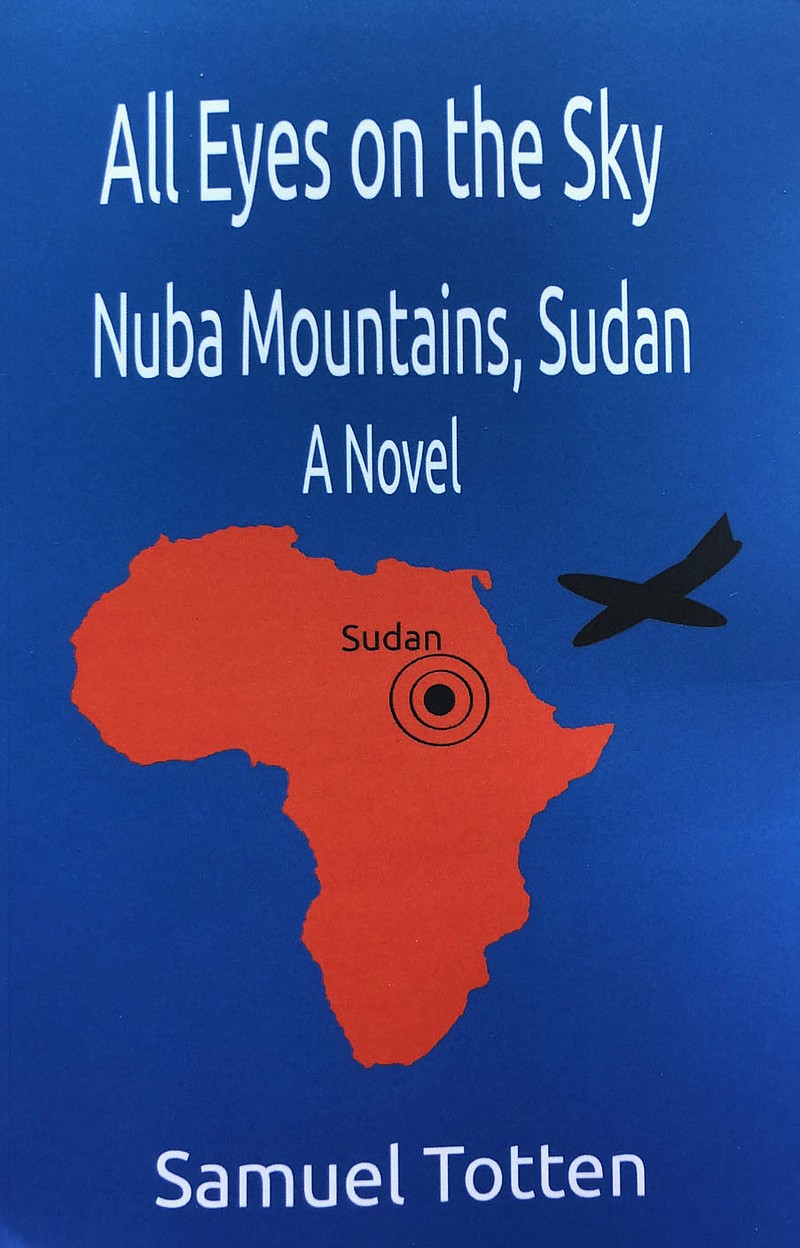 FYI Both of Samuel Totten’s new fiction works, “Laguna Beach: The Kaleidoscopic 1960s” and “All Eyes on the Sky in the Nuba Mountains,” can be found on Amazon.com. “All Eyes on the Sky,” a novel, is about life and death in the Nuba Mountains. The tiny region in the heart of Sudan has suffered decades of violence at the hands of the dictatorial government. The novel focuses on the life of one Nuban man, Jamil, who follows his conscience and puts his life on the line to save his people. But does he go too far?

The professor emeritus of the University of Arkansas College of Education and Health Professions and renowned genocide scholar is responsible for writing "Genocide in Darfur: Investigating the Atrocities in the Sudan," "We Cannot Forget: Interviews with Survivors of the 1994 Genocide in Rwanda (Genocide, Political Violence, Human Rights)" and "Genocide by Attrition: The Nuba Mountains of Sudan," as well as five editions of "Century of Genocide: Critical Essays and Eyewitness Accounts."

But ever since retiring from academic life, Totten has put that style of writing behind him and dedicated himself to writing fiction -- a passion that he always wanted to make a priority.

Over the course of the past year, he's published two novels, "Laguna Beach: The Kaleidoscopic 1960s" and "All Eyes on the Sky in the Nuba Mountains." For Hidden Gems, we chose to speak to him about the latter, given his personal ties to the area.

Tell me a little about your background. It seems to me, even from the surface, that your time as a genocide scholar could have influenced even your fiction writing or maybe inspired it.

Since 1985, I've been studying genocide. Over the years my work shifted. Initially it was work that I did in the library and writing analytic pieces -- for 12 years I wrote articles about different aspects of genocide.

You also worked for a couple organizations early on. What were they?

Then (my work) morphed into what I refer to as other genocides, (those that are) not the Holocaust. There are so many books on the Holocaust, but there are fewer on other (genocides), for example on the 1971 Bangladesh genocide, 1988 Iraqi gassing of the Kurds in northern Iraq. So I began to pursue that.

At some point you went from studying it academically to examining it up close, in person, actually. When was that?

In 2004, I was invited [by the U.S. State Department] to join a group of researchers to go to the border of Chad and Darfur to investigate what happened to the people in Darfur. The purpose of the investigation was for the U.S. to ascertain whether a genocide was perpetrated or not. All that documentation was sent to (then U.S. Secretary of State) Colin Powell and he and his advisers came to the decision that yes, a genocide had been perpetrated and, after analysis, was possibly still ongoing.

I was so taken by the people that I met and interviewed and so moved by their stories that I decided to pursue more on my own, returning to Chad and the border to conduct my own extensive interviews; so I did that for about two years. I ended up getting (named) a Fulbright Scholar based at the Center for Conflict Management at National University of Rwanda. I was interviewing survivors of Rwandan genocide. I continued doing that even afterward.

How did you swing that on your own?

Flying back home to talk at the University of Chicago (about) Darfur, I met a volunteer with Samaritan's Purse who had just come out of the Nuba Mountains while on the plane in Nairobi. I had been trying to get into Sudan without success, but he said he could get me in without a visa. So I started doing that and returned there twice.

These internally displaced peoples had fled Darfur, but instead of going to Chad, they moved to another part of Sudan, right outside this town I flew into. I continued interviewing people from Darfur there.

The second time I was there, there was this huge commotion. Somebody nailed an announcement in Souk, in the open market, that Nuba people were being killed in a large city not far away. This document in Arabic said to gather weapons and get ready to protect ourselves.

I returned to that region that ended up in war off and on for five years. I set aside my research and trucked food to people who were desperate and beginning to starve. That's where the genesis of this book (began).

How did you get around?

I illegally crossed from South Sudan into Sudan. There were no roads. I'd have to travel 8-10 hours. There were no hotels. Wherever you stop, if you have a generator, you have electricity. And the entire time, bombers are flying over.

To get around, I was put in contact with people who had a vehicle that I rented and then I hired a driver and an interpreter. What the rebel group wanted, while I was going through rebel territory, was for me to go up with armed men. They felt that you needed security. I didn't want to do that.

I'm going to guess that your interpreter helped you not only with the language, but with cultural norms?

Yes, they would laugh because I would ask question after question about terrain, about people, the ongoing war and impact on the people, constantly asking questions out of sheer curiosity when I came.

You said you refused security. Did you get in dangerous situations throughout these trips?

Yes, all the time but not from the military. I stayed away from ground fighting, but (bomber) planes flew every single day. As a rule, what we would do when we heard the plane -- it had to be a bomber because it was a no-fly zone -- so every time we heard the plane engine, the driver would stop and everybody would jump out, run out into the desert and find a dry river bed, river banks, to get down low or big rocks (to shelter under). If there were none, we flattened out on the ground and hoped for the best.

One time within about an hour, the vehicle came to a screech four times, and we took off. A lot of people asked for a ride, and we probably had 15, 16 people on the back.

If you had to place your book into a genre, what would that be?

Literary fiction. I'm not interested in writing a nice summer read for the beach. My intent from the beginning was to write literary fiction; what I mean by that is a symbolic structure, the motifs I use, the different components of literature, and I do it carefully. I select names, all germane to the story.

Speaking of which, I appreciate that you use the actual terms, some of the common words and phrases, that these folks use so I can learn more about their culture. Was that a goal of yours to impart some of that to the average reader?

It was. And the differences in their culture were (steep.) They had ways of dealing with medical issues that I would witness and thought was interesting. Somebody got a bloody nose, so we stopped and they picked up goat feces, these little pellets, and would stick it up your nose. They told me that this was just one of the things they use from local lore, since they have very few clinics and only one major hospital. It's the same with cuts, you use leaves pounded into fine powder and put mud over wounds.

How in the world do you get the smell of goat feces out of your nose?

*laughs* I have no idea.

Is this the first time you've written fiction?

I was an English major as an undergrad, and I love literature. When I first graduated, I moved to San Francisco and worked on a novel, but it wasn't any good and I decided to get a job that paid. Over the years I always worked on fiction, but was never happy with anything.

Once I was free to write fiction, it really felt like an incredible freedom. And it is vastly different (from what I wrote before). The difficulty I found initially, after writing nonfiction for so long, was including detail, all these facts, and that's what I had to get away from because it was a story I was telling. There are facts, but I'm not analyzing a genocide or detailing about theory or a geopolitical situation, I was telling a story.

Even though it's fiction, it can still be a comment on genocide, can't it?

Definitely. Genocide took place in the Nuba Mountains in the late '80s and early '90s. When I went up to the Nuba Mountains, initially to interview about Darfur, the more they shared with me about what they experienced, I decided that was the perfect opportunity to conduct interviews and write about Nuba genocide, because I knew nothing about it.

I did write a book about it before the war. So there is a section in this book, one that details how fearful people were. They knew what their parents and grandparents experienced getting out of the mountains to find a place that was safer, with food and water, all that. There are a lot of facts in here conveyed through conversation or one of the characters.

What was challenging about this writing process?

To write a story that is interesting and true to the situation for me; to branch out and bring in other characters, whether that's military personnel, humanitarians, the only physician up in mountains, etc. and still make it relevant.

What do you think readers will really latch on to?

I think they'll be astonished how rural and rudimentary their lives are there. No roads, no electricity or water, no ready medical assistance. But I think that people will be interested in this character because he has a dilemma. Does he join the rebels to fight? Does he leave Sudan with his family and start a new life? Or does he provide safety for his family and go back into Nuba and work on another project that's related to the war?

In this case, he's a citizen journalist. In battle, he's faced with the choice of "Do I join the military?" or "Do I do something just as dangerous, go out on motorcycles to cover a place that's been bombed?" I hope they will see the human story, about the human condition and the daily bombings.

Both of Samuel Totten’s new fiction works, “Laguna Beach: The Kaleidoscopic 1960s” and “All Eyes on the Sky in the Nuba Mountains,” can be found on Amazon.com.

“All Eyes on the Sky,” a novel, is about life and death in the Nuba Mountains. The tiny region in the heart of Sudan has suffered decades of violence at the hands of the dictatorial government. The novel focuses on the life of one Nuban man, Jamil, who follows his conscience and puts his life on the line to save his people. But does he go too far?