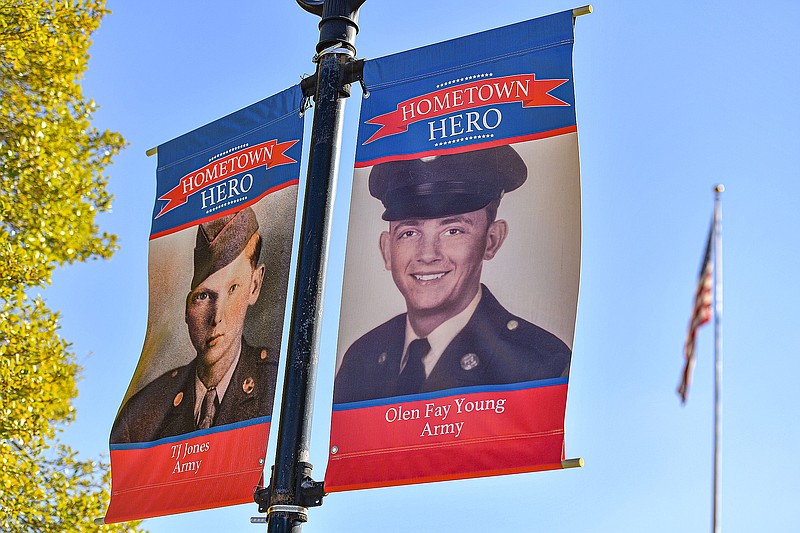 Hometown Heroes Banner Program banners are on display Friday at the Van Buren Municipal Complex in Van Buren. Hometown Heroes is a joint program between the chamber and the city to honor people who have served or are currently serving in the U.S. military. Visit nwaonline.com/photo for today's photo gallery. (NWA Democrat-Gazette/Hank Layton)

VAN BUREN -- The city is preparing for its annual tribute to members of the armed forces.

Ailia Heilman, business manager for the Van Buren Chamber of Commerce, said March 31 is the deadline for residents to submit applications for its 2023 Hometown Heroes Banner Program. The chamber started taking applications April 1.

Heilman said Hometown Heroes is a joint program between the chamber and city to honor people who have served or are currently serving in the U.S. military. It allows someone to choose a service member to be spotlighted on a red, white and blue banner in the downtown area with their name, branch of service and a photo in exchange for a completed application and a $160 fee to cover printing and other costs.

"It's just a thank you to all those who have served from our community," Murray said.

Mayor Joe Hurst said it stands out to those who visit downtown Van Buren that the community takes pride in its veterans and wants to honor them in a variety of ways. The area is home to Freedom Park and Veterans Memorial Plaza, in addition to Hometown Heroes.

"It's just a great way to honor and to remember our veterans, and it becomes personal," Hurst said. "Each picture represents someone who served and sacrificed and also represents family. It represents those loved ones who prayed for them, and we're always thinking of them and always thankful for everything our veterans have done."

Maryl Purvis, director of the city's Advertising & Promotions Commission, said Van Buren Original, an organization of local business leaders dedicated to revitalizing the downtown area, started the Hometown Heroes program with the chamber and city. She recalled Rusty Myers, Van Buren Original's chairman, had the initial idea for it.

"He, I believe, was visiting a family member in New York state and saw banners that were similar to these in their downtown retail area, and he was very impressed with them," Purvis said. "So he came back and talked about them with our Van Buren Original group, and the chamber at the time said that they would like to help with that project."

Purvis said Hometown Heroes was announced to the public in 2015. The first official banners, which came from a local printing company, were hung in 2016. The chamber assumed Van Buren Original's responsibilities for the program in 2019.

The Hometown Heroes banners will be displayed throughout downtown Van Buren between Memorial Day in May and Veterans Day in November for a two-year period, according to Heilman. They are kept in storage during the winter. Successful applicants can keep their banners once the two years are up.

Murray said people can renew with a new banner for another two years.

"A lot of people do it year to year," Murray said. "Every two years, they renew it just so that their hometown hero is represented."

Murray noted the program honors service members who live or are from anywhere, not just Van Buren or Crawford County.

Heilman said 55 banners were installed through the program in 2022. People who buy a banner as a gift for somebody else can also get a certificate they can present to the intended recipient.

Hurst said he and his brothers bought banners of Paul Hurst and Hank Hays, their paternal and maternal grandfathers respectively, through the program a couple of years ago as a gift for their parents. The banners hang on a light post at the Van Buren Municipal Complex per his request, according to Murray.

Hurst said both men served during World War II, with Paul Hurst in the Army and Hays in the Navy.

"It's such a unique way to honor our veterans by having their actual pictures on there," Hurst said. "From time to time, I'll be walking downtown and someone will be related to a veteran that has their picture up, and so we'll start talking about stories, whether they served in World War I or World War II, and other wars as well. It's just a really special program."

Banners will be available for purchase on a first-come, first-served basis. Heilman said the upper limit for installation is about 114 banners.

People can obtain a Hometown Heroes application on the chamber's website, at its office at 510 Main St. or via an email to the chamber, according to Murray. 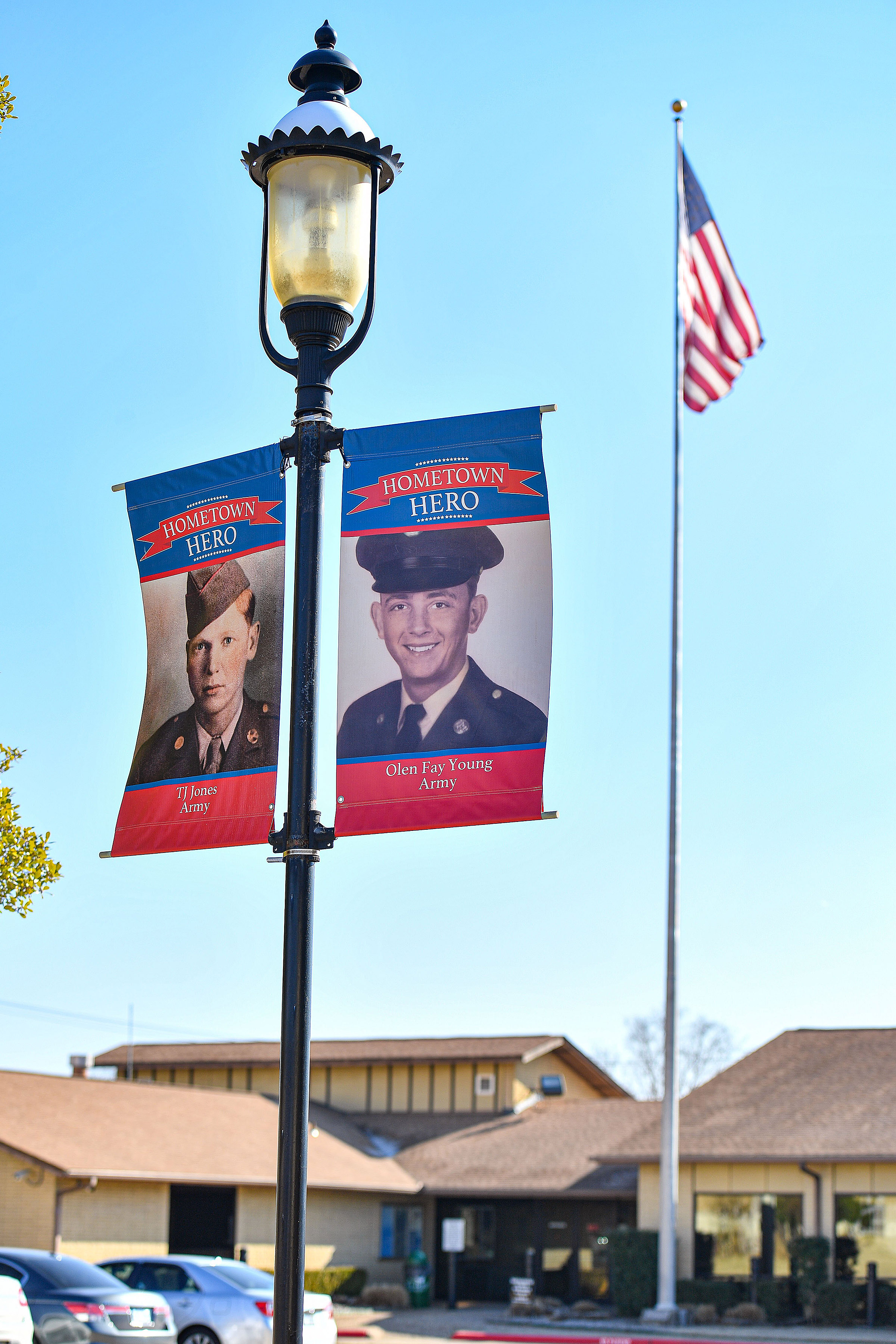 Hometown Heroes Banner Program banners are on display Friday at the Van Buren Municipal Complex in Van Buren. Hometown Heroes is a joint program between the chamber and the city to honor people who have served or are currently serving in the U.S. military. Visit nwaonline.com/photo for today's photo gallery. (NWA Democrat-Gazette/Hank Layton)

Completed application forms, photos and payments for the Hometown Heroes Banner Program can be mailed to: