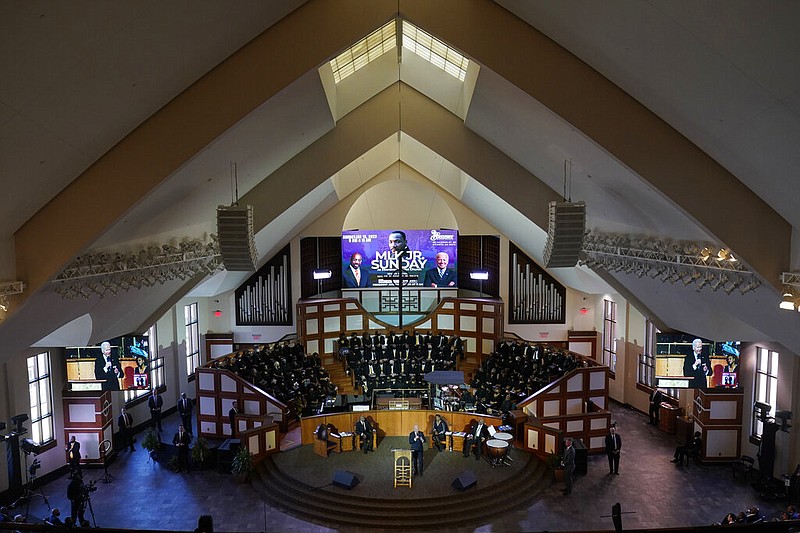 ATLANTA -- President Joe Biden delivered the Sunday sermon at the spiritual home of Martin Luther King Jr. on what would have been the slain civil rights leader's 94th birthday and implored a crowd of churchgoers to continue to pursue his vision.

"It's still the task of our time to make that dream a reality because it's not there yet. To make Dr. King's vision tangible, to match the words of the preachers and the poets with our deeds," Biden said.

"On this day of commemoration, service and action, let us hold up a mirror to America and ask ourselves: What kind of country do we want to be?" Biden said. "Will we honor Dr. King's legacy by rising together -- buttressed by each other's successes, enriched by each other's differences and made whole by each other's compassion? I believe we can."

Biden appeared at the invitation of U.S. Sen. Raphael Warnock, now the senior pastor at Ebenezer Baptist Church. A who's who of Georgia Democrats were on hand for the visit. Biden was greeted on the tarmac by U.S. Sen. Jon Ossoff and Atlanta Mayor Andre Dickens. Former Atlanta Mayor Keisha Lance Bottoms, now serving in the Biden administration, was at the church, as were former Ambassador Andrew Young and King's sister, Christine King Farris.

Before Biden's visit to the church where King once preached, White House officials said he was committed to advocating for meaningful action on voting rights.

"The president will speak on a number of issues at the church, including how important it is that we have access to our democracy," said Bottoms, now the senior adviser for public engagement at the White House.

Bottoms, who was Atlanta's mayor from 2018 to 2022, said "you can't come to Atlanta and not acknowledge the role that the civil rights movement and Dr. King played in where we are in the history of our country."

Biden remarked on the array of luminaries before him as he began his speech.

"I've spoken before parliaments, kings, queens, leaders for a long time. But this is intimidating," he said.

"But I don't need to tell you that we're not always at our best. We're fallible, we fail and fall," he continued. "But faith and history teach us that however dark the night, joy cometh in the morning."

In introducing Biden, Warnock evoked King and poet Langston Hughes, saying "we are inspired by his life of service and how he has transformed his pain into power.

"Joe Biden is no stranger to suffering and grief, but his faith has sustained him," Warnock said.

Biden, a Catholic, reveled in the pageantry of the Black Baptist church. He swayed as the choir sang hymns and gospel songs. He paused and smiled midway through his speech when someone from the congregation -- in the great Black church tradition -- told him to "preach."

"This was such an authentic moment for the president," Bottoms said. "You could tell that he really felt the spirit of the church because he has such great regard for Dr. King. Even where there is not an audience, he has told me many times about the influence that Dr. King had on his life."

In his speech, brief enough to let church out on time, Biden cautioned the congregation that while progress is never easy, "it is always possible."

"Things do get better in our march toward a more perfect union," he said. "But at this inflection point, we know there's a lot of work that has to continue on economic justice, civil rights, voting rights, protecting our democracy. And I'm remembering that our job is to redeem the soul of America."

While several presidents, including Jimmy Carter, Bill Clinton, George W. Bush and Barack Obama, have previously spoken at Ebenezer, Biden was the first president to deliver a Sunday sermon. It was made even more significant by being on King's birthday.

The stop at Ebenezer comes at a delicate moment for Biden after Attorney General Merrick Garland on Thursday announced the appointment of a special counsel to investigate how the president handled classified documents after leaving the vice presidency in 2017. The White House on Saturday revealed that additional classified records were found at Biden's home near Wilmington, Del.

Before Biden arrived, Warnock spoke to ABC News' "This Week" and said he supported the U.S. Department of Justice's decision to investigate.

"I'm glad to see the Justice Department doing its work, and we ought to let that work proceed," Warnock said.

Talking about negotiations over raising the debt ceiling, Warnock warned, "The fact of the matter is, we can do deficit reduction, we can deal with our national debt without playing chicken with the American economy."

As the service wrapped up, Warnock called on Biden to stand next to him. The senator then ticked off a list of his legislative accomplishments, including an infrastructure act and a bill to lower prescription drug prices.

"That, my friends, is God's work," he said, before leading the congregation -- and Biden -- in a rousing rendition of "We Shall Overcome."

The visit to the church came amid hopes of reviving the Biden administration's call for sweeping voting rights legislation.

Biden's failure to win passage of a measure that would have bolstered voting right protections, a central campaign pledge, is one of his biggest disappointments of his first two years in office. The task is even steeper now that Republicans control the House.

The Democrats' voting rights bill, named after John Lewis, the late civil rights leader and Georgia congressman, included provisions that would have made Election Day a national holiday, ensured access to early voting and mail-in ballots and enabled the Justice Department to intervene in states with a history of voter interference, among other changes.

The legislation collapsed last year when two senators -- Democrat Joe Manchin of West Virginia and Arizona's Kyrsten Sinema, a Democrat then and now an independent -- refused to join Democratic colleagues in changing Senate rules to overcome a Republican filibuster. Last month, Sinema announced that she was changing her party affiliation, but she continues to caucus with Democrats.

Warnock steered clear of Biden during his recent campaign against Republican Herschel Walker, worried that the president's low approval ratings in Georgia could rub off on his reelection bid. He has since said he would support Biden if he ran for a second term.

Biden won the presidency with strong support from Black voters and is expected to announce his reelection bid in the coming weeks.

And as a result of the potential upcoming reelection bid, Georgia is going to get plenty of his attention because of how closely contested it has become in recent elections.

In 2020, Biden won in Georgia as well as closely contested Michigan and Pennsylvania, where Black votes made up a disproportionate number of the Democratic electorate. Turning out Black voters in those states will be essential to Biden's 2024 hopes.

The White House has tried to promote Biden's agenda in minority communities and it has cited efforts to encourage states to take equity into account for public works projects as they spend money from the administration's $1 trillion infrastructure bill. The administration also has acted to end the sentencing disparity between crack and powder cocaine offenses, scrapping a policy widely seen as racist.

The administration also highlights Biden's work to diversify the federal judiciary, including his appointment of Justice Ketanji Brown Jackson as the first Black woman to serve on the Supreme Court and the confirmation of 11 Black women judges to federal appeals courts -- more than those installed to those powerful courts under all previous presidents combined.

The president plans to be in Washington today to speak at the National Action Network's annual breakfast on the King holiday.

Information for this article was contributed by Ernie Suggs and Shannon McCaffrey of The Atlanta Journal-Constitution (TNS) and by Aamer Madhani and Bill Barrow of The Associated Press.