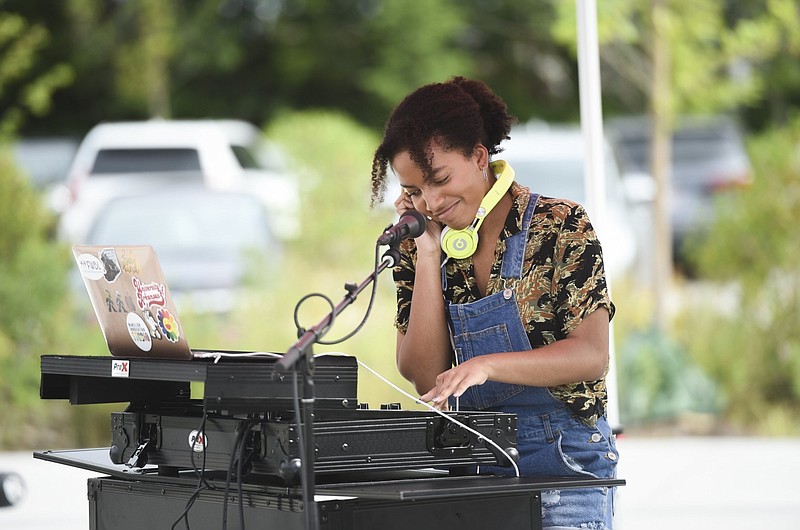 Raquel Thompson performs as "DJ Raquel" at The Momentary in Bentonville in this June 27, 2021 file photo. Thompson, a senior at the University of Arkansas, Fayetteville as of January 2023, served as president of Hill Records, the university's student-run label. (NWA Democrat-Gazette/Charlie Kaijo)

FAYETTEVILLE -- Hill Records, the student-run label at the University of Arkansas, Fayetteville that provides students practical experience in myriad facets of the music business, has released a second EP, featuring music from Arkansas artists in a variety of genres.

The EP, "Something Along the Lines Of," was released in November, and it's available on all major streaming and digital platforms. It can also be accessed through the Hill Records website, https://hillrecords.uark.edu/.

"There's a very vibrant arts scene in Northwest Arkansas, but not a long history of the music business in Arkansas, and we can all contribute to building that ecosystem in the state," said Jake Hertzog, a member of the faculty advising board for Hill Records and an assistant professor of guitar at the university. "We're building that together."

Raquel Thompson, a senior at UA-Fayetteville who served as president of Hill Records, wants to "contribute to the music ecosystem in Northwest Arkansas as much as I can" through various means, she said. The music scene in Northwest Arkansas is "so new and cool, and there's so much room for growth."

Students from the J. William Fulbright College of Arts and Sciences, Sam M. Walton College of Business, and the College of Engineering collaborated on "Something Along the Lines Of," which features music from rapper, composer and UA-Fayetteville alumnus Kwanza; local electronic music producer Elliot Huels, known professionally as Nub Wub; Americana singer/songwriter Adam Posnak; YRLY, a three-piece indie pop band from Fayetteville comprising guitar/vocalist duo Mariel Kasman and Jack Sullivan, along with keyboard/vocalist Elyse Mead; and Run Ivy, a native of Memphis who spent time in Arkansas before relocating to Nashville, Tenn., to work on an EP set for release this summer.

"We had a lot of submissions" for consideration for the EP, so members of Hill Records listened to songs individually, then listened to the music again as a group in order to make their decisions, said Amy Whiteside, president of Hill Records. "We wanted a diverse range of styles," and objectivity was paramount, rather than picking music that's only "what we like" personally.

"The fact that we have students from so many different colleges and majors involved is one of the things I'm most proud of, and students have done it all," said Hertzog. "We don't make editorial decisions for them -- the shaping of this project has really come from students -- and to see them blossom in this environment is inspiring for us."

For example, Thompson, has started her own record label, Hertzog said. "We're very proud of her, and it's going to be fun to track down where students end up" in their careers in years to come following their participation.

Her time with Hill Records "taught me how the process works, and [I learned] all the details of how to make [an album release] successful," said Thompson, a marketing major. "Everything that needs to be done, [from] royalties to liner notes on a CD sleeve," was covered during her tenure, and "it was a cool experience."

Hertzog was an artist on a student-run label when he attended Berklee College of Music in Boston, and students at UA-Fayetteville had approached him with similar ideas in the past, but a grant from the chancellor's office "gave us a place to start" Hill Records, which teaches the music business through hands-on experiences, he said. The university's three core missions are teaching, research and service, so the music business program uses those as guiding precepts.

The initiative is tied in with music business classes, and students participate in the stages of record release, everything from promotions to creating art for the record, he said. They gain not only experience, but also a portfolio, and they get to know artists and those in the music world, which is paramount "because a lot of the music business is networking."

"Meeting all the people and artists" has been a highlight of this endeavor for Whiteside, she said. "You get to see them perform, and they're so good [that] it makes you glad to be able to help them."

Whiteside, a senior majoring in communications, has learned how to collaborate in a group and work with "so many different types of people," she said. "I know that seems basic, but people have very different styles," with some needing more explanation and some needing more "push" to accomplish things.

It's important to remember that many of the artists Hill Records partners with are also learning the ins and outs of the music business, she said. "We have to learn together" and -- especially as president -- "I have to support everyone so we get done what we need to get done."

There are "a lot of new experiences for us, because we've never done this before, but we always find our way, and you have to keep a level head when these things happen," she said. "Remain calm, and find a solution, [rather than] freaking out."

Now that she has her own record label, her experience "making sure everyone is working together and keeping everything on track" as president of Hill Records has proved invaluable, Thompson said. It also "made me a more empathetic, better leader, [because] I'm more open and accepting."

Hill Records only started a couple of years ago, so "we're still in the infant stages, [but] we're going to start to book more live shows and events for our artists in 2023," Hertzog said. They also hope to release full albums dedicated to sole groups or artists -- rather than the music of multiple artists -- in the future.

Hill Records has already partnered with George's Majestic Lounge to host three artist showcases, the latest Nov. 30. That night, six acts performed on a pair of stages at the storied music venue on Dickson Street.

"It went very well," as did the rollout of the EP, said Whiteside, who plans to enroll in graduate school at UA-Fayetteville for additional communications studies after she graduates this spring. "We want to do more work with individual artists and more events, growing steadily and scaling effectively."

For example, Hill Records is working on an album with the university's Schola Cantorum, the highly selective and decorated choral group, she said. "We're just starting to talk about that, so I can't say that much, but we're [excited]."

During her sophomore year, one of Whiteside's professors mentioned Hill Records and the organization's need for a communications specialist, she said. As someone studying communications who enjoys listening to music and finds the music industry "really intriguing," she applied, was accepted, and spent a year in that role before ascending to president.

As a sophomore, Thompson read about Hill Records in a campus email and immediately jumped at the opportunity, because "it perfectly aligned with what I want to do with my life," she said. Her time as leader "allowed me to realize I was capable of overseeing all these decisions and making them."

She launched her own label, Love More Records, a year ago, and already has five artists, she said. "We're running strong."

Applications for next year's Hill Records officers will open during the spring semester, but "we often need volunteers, too, and that's a great way to get your foot in the door," Whiteside said. "It's definitely a time commitment, but it's worth it."