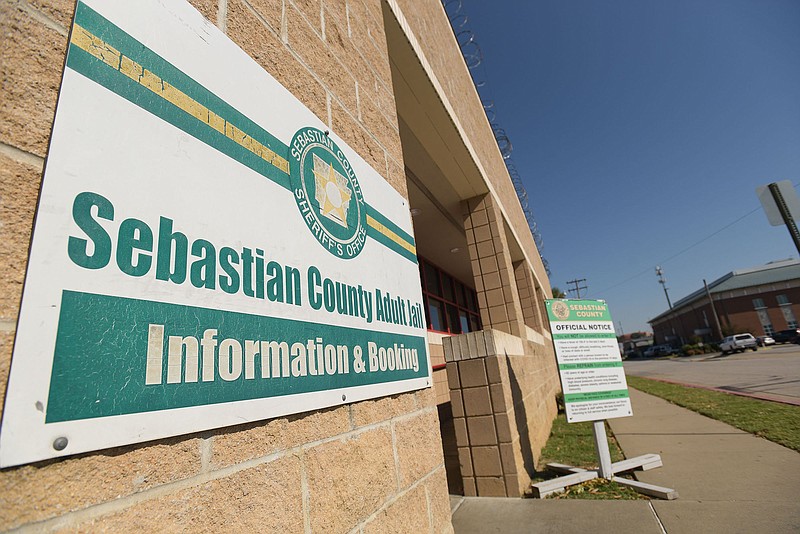 FORT SMITH -- The family of a man who died at the Sebastian County jail in 2021 from acute dehydration and malnutrition filed a civil rights lawsuit claiming it was the result of both "deliberate indifference and neglect" and systemic deficiencies at the facility.

Attorneys representing the estate of Larry Price Jr. of Fort Smith filed the lawsuit in U.S. District Court on Friday , according to court records.

The lawsuit asserts Price, a Black man, had his federal constitutional rights violated by being deprived of necessary medical and mental health care while held at the jail as a pretrial detainee, leading to his wrongful death. It also accuses the defendants of medical negligence and violating their correctional standards of care under state wrongful death and survival statutes.

The lawsuit also lists as defendants 20 unidentified correctional officers or medical staff at the jail who worked either for the sheriff's office or Turn Key and were responsible for the health, safety, security and welfare of the inmates there.

The lawsuit describes Price as a "severely mentally ill man" who lived below the poverty line in Fort Smith and was unmarried, unemployed, homeless and disabled. One of the mental health disorders from which he suffered was paranoid schizophrenia, which led to him experiencing delusions, visual and auditory hallucinations, disordered thinking and severe agitation, as well as involuntary commitments in state and county mental hospitals.

"It was not uncommon for him to suffer from bouts of psychosis and to completely lose touch with reality," the lawsuit states.

Price also had intellectual developmental disorder, the lawsuit states. His IQ was reportedly less than 55.

Price was arrested Aug. 19, 2020, and charged with first-degree terroristic threatening, a class D felony, according to the lawsuit. Price, then 50, reportedly walked into the Fort Smith Police Department and began shouting and cursing at officers. He at one point held out an empty hand as if holding a gun and used his index finger to pull an imaginary trigger while verbally threatening them.

Officers reportedly recognized Price from previous visits to the police station, which took place almost every day and were commonly characterized by agitated or irrational behavior on Price's part. He was arrested and taken to the jail after refusing to leave the station when asked to do so. Price's bail was set at $1,000.

Jail medical and security staff were also familiar with Price and his history of mental illness through the multiple times he had been detained at the facility in 2019 and 2020, which was typically for disorderly conduct and trespass-related charges, according to the lawsuit. Price had been detained there from July 7 to Aug. 11, 2020, during which he was prescribed anti-psychotic medication.

"Records from that recent pretrial detention indicate that he was hearing voices, delusional, depressed, disoriented, confused, speaking rapidly, experiencing psychomotor agitation and struggling to understand his surroundings," the lawsuit states. "His mental symptoms were described as 'severe' and likely to have a '[m]arked impact on [his] ability to function satisfactorily in the [jail] setting.'"

Price was moved into a segregated housing area, solitary confinement, after being booked Aug. 19, 2020, due to his "current level of thinking," according to the lawsuit.

Lewis prescribed Price anti-psychotic medication after a mental health referral Sept. 1. Although Price sometimes accepted the medication over the following three months, he would more often refuse to take it. Despite this, no Turn Key medical professional tried to meaningfully address this issue, with Price continuing to exhibit increasingly severe symptoms, according to the lawsuit.

The lawsuit states Lewis, rather than try to address the situation, discontinued Price's medication following an appointment Nov. 24 in which Lewis reportedly noted Price refused to take them and be seen. Price reportedly didn't receive any more medication or mental health treatment or care after that point, resulting in further mental deterioration that included eating and drinking progressively less.

Ferguson went to check on Price on Jan. 28, 2021, after being notified Price was consuming his own feces and urine, according to the lawsuit. She saw he was "noticeably thinner," and although she told staff to monitor his food and fluid intake and output daily, there's no indication she alerted a higher-level provider about Price losing 35 pounds or that jail medical staff did anything in response.

The lawsuit further states staff only maintained a food and fluid log on Price sporadically and incompletely over the next three months, with no such monitoring taking place after April 25.

"In May 2021 a Sebastian County Circuit Court judge ordered Mr. Price to undergo a psychiatric assessment to determine whether he had the capacity to form the culpable mental state required to prove him guilty of the crime with which he was charged and to determine whether he was mentally fit to proceed to trial," the lawsuit states.

"That assessment, however, never occurred. And in the months that followed, Mr. Price continued to languish alone in his cell -- further descending into the throes of his untreated psychosis."

Price was "visibly malnourished and starving to death" by Aug. 1, the lawsuit states. However, despite the fact staff was ordered to check on his well being every 15 minutes or more, no one summoned medical help, alerted a supervisor or documented Price's condition.

Jail staff found Price lying unresponsive in his cell in a pool of standing water and urine on Aug. 29, the lawsuit states.

Price was pronounced dead on arrival at Mercy Hospital Fort Smith, the lawsuit states. Price, who weighed 185 pounds when he was booked into the jail a year earlier, was estimated by hospital personnel to have weighed 90 pounds. A physician diagnosed him with cachexia, a wasting syndrome, while a medical examiner concluded his death was caused by acute dehydration and malnutrition.

Price's estate is requesting relief in the form of all compensatory damages available under state and federal law, punitive damages against Turn Key, attorneys' fees and litigation costs and any other relief the federal court deems just and equitable, according to the lawsuit.

The estate is being represented by the Seattle-based attorneys Erik Heipt, Hank Balson and Edwin Budge.

Sheriff Hobe Runion said in a video statement Price's 2021 death is only in the news now due to a "lawyer from Seattle, Wash." suing county taxpayers.

"That lawyer made a lot of allegations, and out-of-state reporters have repeated those allegations as if they were all true; they're not," Runion said. "When the state police and prosecuting attorney had already determined no one acted criminally. I'm still looking into this matter because I place a high priority on the safety of everyone in the jail. The people of the county deserve to know what happened."

Runion said Price was a convicted sex offender and had been convicted for violent crimes. Price was awaiting a mental health evaluation at another facility at the time of his death, with Runion noting there is evidence he was "severely mentally ill."

However, Runion said Price's autopsy showed he weighed 120 pounds when he died, as opposed to the 90-pound estimate cited in the lawsuit. This means that, with an original weight of 185 pounds, Price lost around 5 pounds per month while in jail for about a year, according to Runion.

"Let me make one point clear: the jail staff gave this inmate plenty of food and water every day," Runion said. "The jail medical staff were in regular contact with him. The autopsy said the inmate died with covid. All of us want to know more about what other factors may have led to this tragic death."

Dan Shue, county prosecutor, wrote in a letter to Arkansas State Police on Jan. 5, 2022, he believed no criminal charges could be filed in connection with Price's death after reviewing the agency's investigative file into the matter.

An autopsy by the Arkansas State Crime Laboratory determined the cause of Price's death was "acute dehydration and malnutrition" as the lawsuit stated, but with additional, contributory causes of "covid-19 positive at time of death and schizophrenia," according to Shue. The report concluded the manner of death was "natural."

Shue wrote Price being a registered sex offender stemmed from pleading no contest to first degree sexual abuse in the Circuit Court in 1999. He was also convicted of assault causing bodily injury to a family member in Dallas County, Texas, in 2004.

Price's counsel in May 2021 filed motions for a criminal responsibility and fitness to proceed examination at Arkansas State Hospital in Little Rock, which halts further proceedings until a determination is made, according to Shue. Price's appointment was scheduled for Sept. 2, 2021.

A legal response to the lawsuit hasn't been filed in federal court as of 5 p.m. Monday, according to court records.

Print Headline: Family of a man who died at the Sebastian County jail files suit