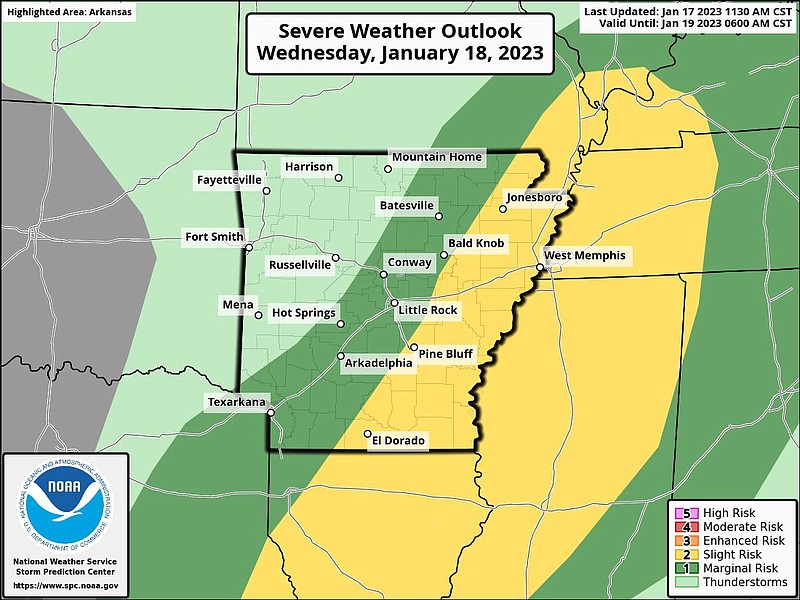 Eastern Arkansas could see severe thunderstorms on Wednesday afternoon, according to the National Weather Service in North Little Rock.

Jeff Hood, a meteorologist with the weather service, said that while widespread rain may start in the morning, by noon and until about 5 p.m. people in south, southeast Arkansas should watch for severe thunderstorms.

While widespread rain my start Wednesday morning, people in portions of southern and eastern Arkansas should watch for thunderstorms between noon and 5 p.m., meteorologist Jeff Hood said.

Much of the eastern half of the state is at a marginal to slight risk for severe storms, the weather service said in a Twitter post.

“The main concern we are seeing now is damaging winds up to 60 miles per hour,” Hood said.

Hood said there is a low to very low potential for tornadoes, but the weather service could not completely rule them out.

“We are not expecting a tornado outbreak like some other states have seen recently, and it is possible we might see a few brief tornadoes with some hail but we are focusing on the strong winds,” Hood said.

According to the meteorologist, northern parts of the state are forecasted to see half an inch of rain, and southern and southeastern portions of Arkansas could see 2 inches or more.

“Much of this area has seen significant amounts of rain within the last couple of weeks, and isolated flash flooding will be possible Wednesday afternoon and evening,” a briefing from the weather service said Tuesday morning.

For Wednesday temperatures could reach the 70s, Hood said, but the day will mostly be in the 50s and 60s across the state.

“Schools are back in session and people are back to work after maybe having Monday off,” Hood said. “We just want people to stay aware and keep a plan in place in case they are at work or driving in a place that they aren’t normally in during severe weather.”