Red Wolves give an inside glimpse at national signing day 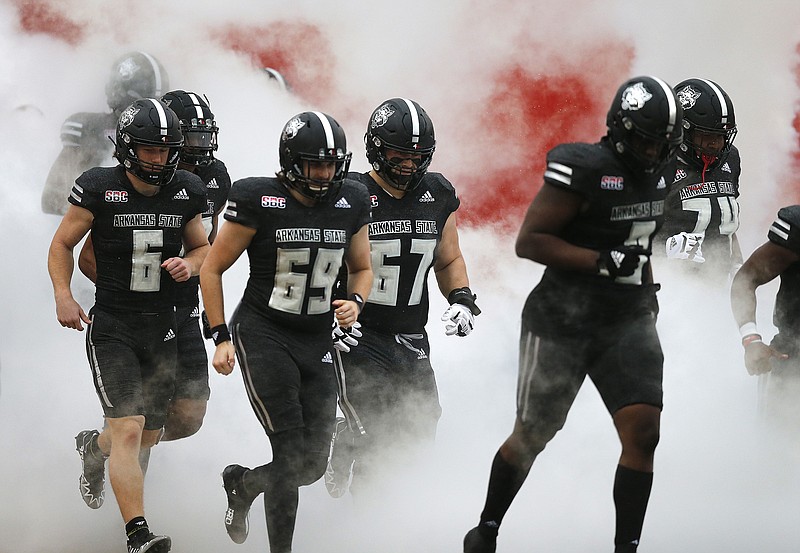 JONESBORO -- At 8:19 a.m., Matt Wilson, Arkansas State's assistant athletic director for player personnel, pokes his head into the doorway at one end of the Red Wolves' conference room.

"Where did everyone go?" he shouts, peering down the near wall only to see several empty chairs.

Some of ASU's black-clad crew of staffers have momentarily ventured back to their offices. Others have wandered down the hall to grab a kolache or cinnamon roll from the cornucopia of pastries on the kitchen counter.

Wilson needs everyone back, though. It's time to announce the Red Wolves' 11th commitment of the day, Benton offensive lineman Walker Davis.

A little more than two hours after Director of Football Operations Blake Jackson arrived at the Centennial Bank Operations Center, ASU is already halfway done with the high school portion of its 2023 class on the first day of the early signing period -- better known as national signing day.

Coach Butch Jones' first two seasons with the Red Wolves have been far from what he and anyone in Jonesboro expected, going 5-19 with a mere two Sun Belt Conference victories and twice finishing last in the league's West Division. But Jones has vowed to consistently outrecruit his program's prior class -- in 2022, ASU's group ranked second in the Sun Belt and 67th nationally.

If Jones is going to deliver on that promise, this day, Dec. 21, 2022, may well be the most important since he took over the Red Wolves a little more than two years ago.

The Arkansas Democrat-Gazette was granted exclusive behind-the-scenes access for a marathon, 15-plus-hour day as Jones and ASU formally began the process of assembling the crop of players who will join the Red Wolves in 2023 and try to revive a program where the memories of a prosperous past decade have started to fade.

"We have a blueprint," Jones said. "As a leader, you can't push the panic button. You know where you're going, you see the progress, and we're building this program for sustained success."

There's no question who the director is on this day: At the head of the table is Jones, donning his signature dark red blazer with a faded black plaid.

The veteran head coach decides who's going to put a commit's name up on the whiteboard. If an announcement isn't how he wants it, he'll tell the staff they're going to redo it.

In between, Jones is on the phone -- either his or an assistant coach's -- talking to either a signee or their parents. While FaceTiming with Takare Lipscomb, he remarks on the wide receiver's pit bull.

"Make sure he don't bite you," Jones quips.

Perhaps it's not a perfect analogy, but if Jones is the director, then Wilson is the producer. Overseeing all of ASU's recruiting staff, he's done the legwork throughout the year to ensure that signing day goes off without a hitch.

What's most revealing about this day is the fact that there are basically no surprises.

The Red Wolves managed to flip safety Dontay Joiner -- a Lakeland, Fla., product who had been committed to Sun Belt foe Marshall since the summer -- and everyone in the room breaks out into a smile when they learn how Joyner announced his decision, unzipping a sweatshirt to revealing an ASU T-shirt underneath.

But the other 19 high school signees were expected additions, which is exactly how Wilson wants it.

"It's anticlimactic because all the work has been done," Wilson said of the actual signing day. "You know there are [recruiting] battles out there, you just don't know who you're battling -- like you're playing an opponent you don't know. ... You just have to trust what your coaches are doing and that you've set up a plan to do it right."

After the first signee, quarterback Jaylen Raynor, sends his paperwork a few minutes after 7 a.m., the process repeats itself 28 times -- only Syracuse transfer wideout Courtney Jackson is excluded with his decision coming after lunchtime.

Josh Daume, senior associate athletic director for compliance, receives all the necessary documents via email -- long gone are the days of fax machines. Once Daume gives clearance, Wilson gathers everyone in the room while a placard with the signee's name is passed down from the far end of the table.

The conference room looks not too dissimilar from the war rooms seen during NFL or NBA drafts.

Along the back wall are lists of potential transfer targets scribbled in dry-erase marker. One long side wall features all of the 2023 and 2024 in-state prospects along with ASU's recruits and targets for the current class plus a depth chart of the Red Wolves' roster, color-coded by years of eligibility remaining.

Nobody is paying attention to those names on this day, however. All the focus is on the names that get slapped on the board in front of the windows that look out onto Centennial Bank Stadium.

For running back Cedric Hawkins, it's running backs coach Marquase Lovings who gets the honors of announcing the Stuttgart product's commitment.

From there, it's on Dooley and photographer/graphic designer Julian Aguilar to send out the tweets that make everything officially official.

For each signee, Dooley and Aguilar produced a commitment graphic, lifestyle video and highlight reel while also designing all of the day's logos and templates. Between all of the signees, the pair spent a total of 144 hours -- the equivalent of six full days.

As the names fill up the board, there's a recognition around the room of the effort contributed by all to get to this celebratory moment. Once all of the high school signees are announced, Jones and Co. add eight transfers to the group.

The head coach then gives everyone a half-hour break before they'll gather again for a staff meeting.

It's right back to work.

"It's kind of the old adage that I believe Nick Saban said, you get 24 hours to enjoy it," Jackson said. "Recruiting never stops. ... As soon as you're done with this [class] -- and you're never done with this one -- you can always see if there are other pieces you'd like to add."

The action eases for a few hours in Jonesboro even as the drama of national signing day continues elsewhere around the country.

There's a little extra juice in the building as Jones walks across the hallway for his news conference -- Jackson has informed ASU of his decision, another get for a Red Wolves' receiving unit much in need of a rebuild.

Other than a 13-minute monologue highlighting each of ASU's additions, the hour-long meeting with the media is mostly perfunctory. But Jones' speaking engagements for the day are far from over. He'll repeat all of his thank yous a couple of hours later while standing at the front of a room filled with boosters inside Johnny Allison Tower.

The reception capping signing day is meant mostly for the program's supporters to get an inside look at the Red Wolves' class. Each position coach goes through his respective signees, detailing a bit about all 29 players while a highlight reel rolls in the background.

Of course, Jones can't contain his excitement, seemingly jumping in to add a tidbit for every player. This is the 55-year-old's element: He's constantly selling his program.

Jones gets a good laugh from the crowd when he says that if anyone else has a private plane to share with ASU, it would only help in easing the burden of recruiting such a large footprint across the south -- the Red Wolves' class features players from 12 states plus Germany.

ASU staffers are scattered around the room, beers in hand and families in tow.

But, even if for just a few hours, everyone can toast to the work of the past 365 days.

"Last year's class was really good and we're happy with those guys," Wilson said. "But we want to get better ... so that competition between that class and this one drives each other to be better."

Print Headline: Red Wolves give an inside glimpse at national signing day