TELEVISION: ‘The Last of Us’ — ‘Walking Dead’ meets ‘Station Eleven’ 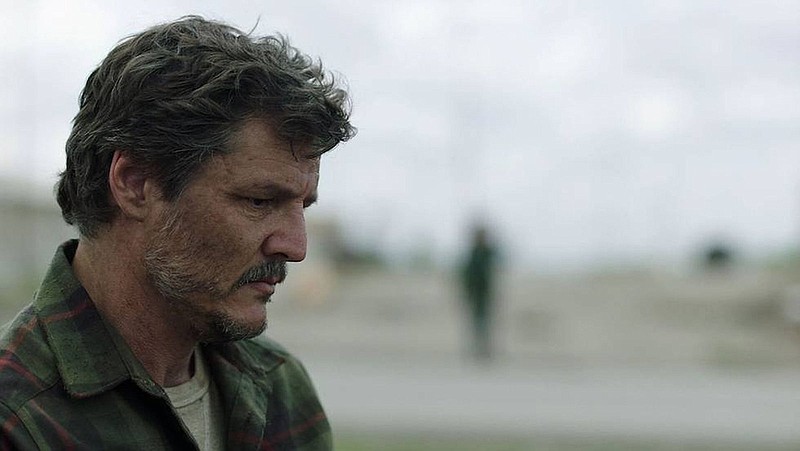 Pedro Pascal stars in “The Last of Us,” the HBO drama adapted from the video game of the same name. It airs at 8 p.m. Sundays on HBO (and streams on HBO Max). (HBO/TNS/Liane Hentscher)

Based on the video game of the same name, HBO's "The Last of Us" is a post-apocalyptic story about a population that has been decimated by a pandemic. Instead of a covid-like virus, the culprit is a parasitic fungus that turns people into zombies, spreading the sickness and its long, fibrous mutations with just a bite.

Life is either dreary, precarious and haphazard in urban militarized zones, or people are making do on their own in rural pockets of the United States. Society has collapsed and it's every person for themselves. Don't trust anyone.

Amid all this uncertainty, a grizzled smuggler (Pedro Pascal) is tasked with looking after a mouthy 14-year-old girl (Bella Ramsey) and transporting her across the country to a research lab. She's immune to the fungus and she might be the key to developing a cure or a vaccine or something.

It's all very "The Walking Dead" meets "Station Eleven" — two shows with devoted followings (the former substantially larger than the latter) and HBO is hoping to capture some of that magic here, no matter how derivative "The Last of Us" may seem at this point. I've never played the game, so I'll leave discussion of the adaptation's merits to those who have.

Above all, TV is about entertainment. But speculations about the future always reflect present-day anxieties, and we have plenty of those to choose from at the moment. It's not a bad thought experiment: What if things become much worse than they already are — what then? How does one survive this sort of thing? What is the psychological fallout? What becomes of the last of us?

I'm not sure I find these musings, interspersed between action and violence, as meaningful or emotionally complex as some audiences do. You probably know where your tastes lie in this regard and "The Last of Us" is certainly well-made and mostly absorbing, anchored by solid performances from Pascal and Ramsey, both alumni of the equally sprawling and fraught "Game of Thrones."

The primary relationship and where it's headed, between Pascal's Joel — a man haunted by grief and numb to any new possibility for human connection — and Ramsey's Ellie — an orphan who has never known a parent's love and has toughened herself to that reality — is telegraphed early on. A stoic man sees his heart grow three sizes thanks to a spunky kid he reluctantly learns to care for as if she were his own. It's a trope that Hollywood returns to often (it certainly was a pivotal theme in "Station Eleven") and maybe that's part of what left me somewhat cold to the premise. "You have a greater purpose than any of us ever imagined," someone tells Ellie and the line is invoked with great portent and ... we've been here before, across various genres.

I always find it curious when apocalyptic stories strip out a certain amount of complexity by presuming racism won't find a way to stubbornly persist — or worsen — when daily existence becomes a life-or-death proposition.

But I like that "The Last of Us" isn't consumed with telling stories about the powerful, but instead is focused on regular people who are just trying to make it through this mess. There's an all-too-brief but terrific scene featuring an aging American Indian couple played by Elaine Miles ("Northern Exposure") and Graham Greene ("Longmire") and I would have loved to have stayed longer with this droll pair, who aren't alarmed so much as amused by the unexpected, very intense and not terribly friendly arrival of Joel and Ellie at their cabin.

Like so many streaming series, the season includes a stand-alone episode that functions as an interlude of sorts, this one focusing on a side character played by Nick Offerman. He's a survivalist and prepper in suburbia who refuses to evacuate. Once he gets the power grid back online, he creates an illusion of normalcy for himself in his emptied-out neighborhood. His seclusion is interrupted one day by another man, played by Murray Bartlett ("The White Lotus"), who has stumbled into this now-isolated place. Call it an apocalyptic meet-cute. He's starving and Offerman's character grudgingly grants him a meal — with wine! It's more glorious than anything this guy has seen in years.

Their story paints a touching portrait of what it might look and feel like to be alone and desolate for so long, and then meet another lost soul and suddenly want to connect — physically and otherwise. Would they have fallen in love in the Before Times, this cranky, self-sufficient recluse and his more tender and gregarious partner? Who knows. But they end up building a life together as a couple, clinging to each other amid their surreal circumstances. There's something wonderfully strange and idealistic about their domestic nesting. No nosy neighbors or long lines at the store, just the two of them living the perfect suburban dream in relative abundance, against a backdrop of streets bereft of people.

Eventually, they will play a role in helping our smuggler and his teenage cargo.

But death comes for everyone, and it's not always by way of the fungus. That seems like a worthwhile thing to remember as well: Even if you outrun the zombies, death will get you in the end, one way or another.

So what is life up until that point? "The Last of Us" offers a glimpse.