Hogs aim for better fortunes away from home 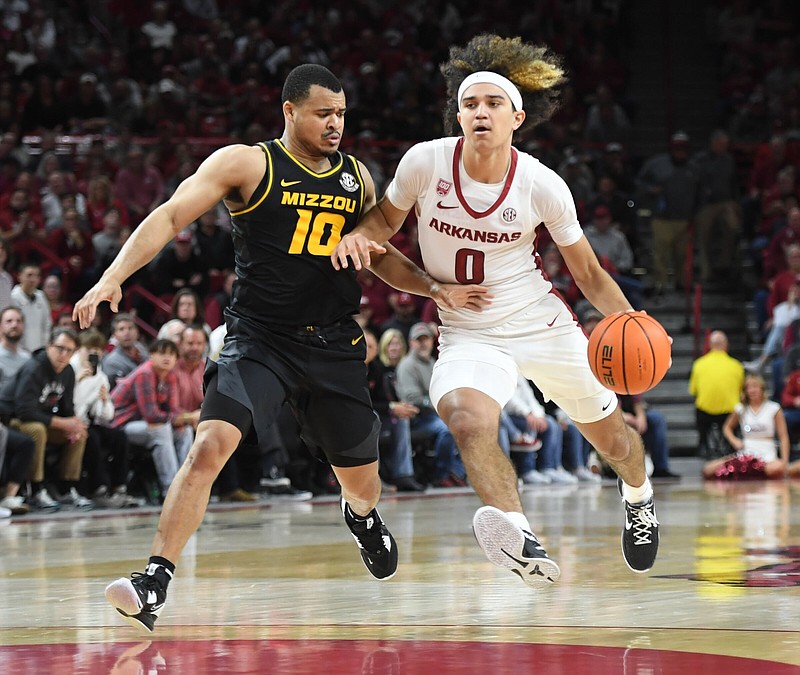 FAYETTEVILLE -- It's been a bumpy road this season for the University of Arkansas men's basketball team.

Coach Eric Musselman said his Razorbacks, who had two returning players this season in junior guard Davonte Davis and senior forward Kamani Johnson, are getting extra attention from SEC opponents and fans on the road because they're the only conference team that advanced to the NCAA Tournament Elite Eight the previous two seasons.

"I was shocked at the crowd that Vanderbilt had. I can pretty much tell you what the environment's going to be like at Missouri. They're waiting for us."

When the Razorbacks opened SEC play at LSU on Jan. 4, the Tigers drew a season-high 10,380 fans to the Maravich Assembly Center.

Auburn drew its usual sellout crowd of 9,121 at Neville Arena when Arkansas visited, even though the students were on Christmas break.

Vanderbilt, averaging 6,344 at home, drew 9,362 for its game against the Razorbacks in Memorial Gymnasium.

"We've won at a high level the last two years, and quite frankly there are some teams really ready for us and there are some opposing fans, that when we walk in their building, they're enjoying watching the home team get us," Musselman said on his television show Sunday night. "So there's a responsibility that comes with that."

Missouri is averaging 10,140 at home, nearly 5,000 under Mizzou Arena's capacity of 15,061, but Tigers Coach Dennis Gates said Tuesday that only about 200 tickets remained unsold for tonight's game.

"I think we're going through a lot of new experiences, meaning sold-out buildings," Musselman said Tuesday during a media Zoom call. "We have six freshmen that obviously have not experienced college basketball, and some other guys that probably haven't played in these types of atmospheres.

"So there is a little bit of excitement when Arkansas plays on the road right now."

"You've got to limit runs by the other team because they're playing at home."

The Razorbacks are the only SEC team that will play four of its first six conference games on the road.

"I thought at Vanderbilt, as the noise level rose, we had a couple crucial turnovers that led to live-ball transition baskets the other way," Musselman said on his radio show. "So taking care of the basketball, playing with composure, those things are going to be very, very important for all of our road games from here on out."

Arkansas is 3-1 in neutral site games this season, going 2-1 in the Maui Invitational with victories over Louisville 80-54 and San Diego State 78-74 in overtime and a 90-87 loss to Creighton, as well as beating Oklahoma 88-78 at Tulsa.

But those four games included plenty of Arkansas fans as opposed to the hostile environments the Razorbacks are facing on the road in the SEC.

"It's a roster that's still learning, still adjusting," Musselman said. "Still trying to figure out who they are, who we are.

"All those things are still a work in progress for us."

The Tigers have won both of their SEC home games, beating Kentucky 89-75 and South Carolina 85-82.

"The level of importance for us to continue to take care of home court is essential," Gates said. "It's essential to each and every week.

"We want to continue to win our home games. Those are important factors whenever you're building new program."

Arkansas beat Missouri 74-68 at Walton Arena two weeks ago for the Razorbacks' lone SEC victory. They rallied from a 25-8 deficit in the first half.

"They're an explosive offensive team when you look at their numbers and they're a team that creates a lot of steals," Musselman said of the Tigers. "So I think some of the same themes that we had going into the last game against them, we need to do.

"But we cannot get behind by 17 like we did at Bud Walton. We need to play better basketball earlier in the game."

After tonight, the Razorbacks' next three SEC games will be at Walton Arena against Ole Miss, LSU and Texas A&M.

"Certainly we look forward to playing at home," Musselman said on his television show. "It's not been an easy schedule thus far. But we've got to go try to do something at Missouri."

Print Headline: Hogs aim for better fortunes away from home