Arkansas lawmaker files bill to restrict bathroom use based on sex 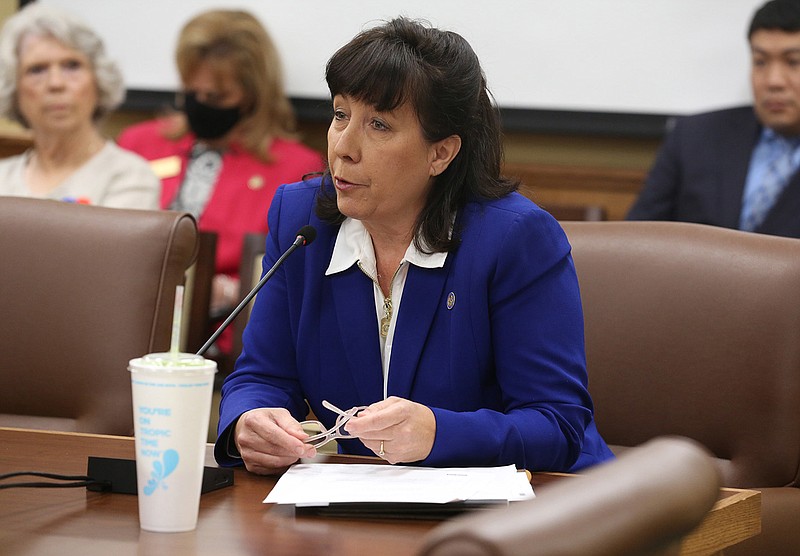 Rep. Mary Bentley, R-Perryville, presents HB1749, which would require public school employees to address students only by the name and sex designated on the student's birth certificate, during the House education committee on Tuesday, April 6, 2021, at the state Capitol in Little Rock. .(Arkansas Democrat-Gazette/Thomas Metthe)

Mirroring attempts in other states to block transgender people from using bathrooms of their choice, a bill filed Tuesday by Arkansas state Rep. Mary Bentley, R-Perryville, would require schools to restrict access to restrooms and changing areas based on sex.

Under House Bill 1156, public school districts and open-enrollment charter schools would have to designate multiple-occupancy facilities as "for the exclusive use" of either males or females. People would only have access to facilities that correspond to the sex listed on their birth certificates.

Along with restrooms and changing areas, the bill applies to locker rooms, showers and any other rooms used by several people in which a person "may be in various stages of undress." The bill is aimed at public school districts and open-enrollment public charter schools that serve students in prekindergarten through grade 12.

Bentley, who was elected to her fifth term in November, said she sponsored the bill after several school board members and parents from her district voiced support for the measure.

She defended the legislation, saying it was not aimed at restricting access to restrooms for transgender people but intended to keep children safe from sexual assault and rape. She said she had heard from some school officials who were concerned about the safety of students with gender dysphoria using different bathrooms.

"It's a safety issue for all students," she said during a phone interview Tuesday.

When asked about the school officials who supported her bill, Bentley said they were from across her district and the state.

In an emailed statement, American Civil Liberties Union of Arkansas decried the bill as a violation of Title IX and the U.S. Constitution.

"Nearly every court to consider the issue has held that it is illegal to bar transgender youth from restrooms that align with their gender identity," said Holly Dickson, executive director of the ACLU of Arkansas. "Passing such a bill not only harms transgender young people but could cost the state millions in costly litigation and federal funding losses."

Bentley said she wouldn't be surprised if her bill faced lawsuits if passed but added she saw no reason for it to be challenged in court. Pointing to a similar bill that passed in Florida, Bentley said she was not concerned about her legislation violating Title IX or the U.S. Constitution.

Under the bill, schools would have to provide access to a single-occupancy restroom or changing rooms for anyone who does not wish to comply with the single-sex designations. Bentley noted that all schools were already required to provide single-occupancy rooms so the measure would not require districts to build additional facilities.

Schools would have to adopt disciplinary policies for any individuals who violate the bathroom designation under the bill. Bentley said she intended to leave the details of administrative action up to school districts.

Parents and legal guardians are not required to submit their children's birth certificates when requesting admission to public schools. While a parent is required to provide a document indicating their child's age, they may use a document other than a birth certificate, including a passport or previous school record, according to Arkansas state code.

People would be able to enter restrooms designated for the opposite sex to render medical assistance or address emergencies. The bill also provides exceptions for custodial, maintenance and inspection purposes.

The legislation would require schools sponsoring or supervising overnight trips to ensure students are assigned rooms based on their "birth-assigned gender."

Bentley said she expects the bill to be a "simple pass," citing the Republican super majority in both the state House and Senate.

Senate Bill 774, sponsored by state Sen. Linda Collins-Smith, R-Pocahontas, in 2017 would have required people to use restrooms and showers in schools and other state and local facilities that corresponded with the gender on their birth certificates. Along with Democrats, then-Gov. Asa Hutchinson, a Republican, expressed a desire before the start of the session to avoid debating the bill, pointing to similar legislation in North Carolina that sparked boycotts and protests.

In 2021, Arkansas lawmakers passed the nation's first ban on gender-affirming care for youths under the age of 18. The law led to an extended legal battle culminating in a trial that concluded last month. The judge in the case has not yet issued a ruling.

An analysis by National Public Radio published in November found state lawmakers across the nation introduced at least 306 bills targeting trans people during the previous two years. The figure was higher than in any previous period, according to the report.

Before reaching the floor of the House, Bentley said her bill will have to pass through the House Education Committee. Sen. Dan Sullivan, R-Jonesboro, is sponsoring the bill in the Senate.