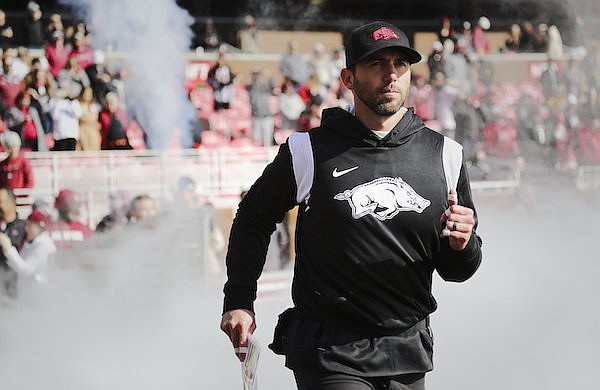 Arkansas offensive coordinator Kendal Briles runs onto the field prior to a game against LSU on Saturday, Nov. 12, 2022, in Fayetteville.

FAYETTEVILLE — ESPN reported Wednesday that Kendal Briles has accepted the offensive coordinator job at TCU, ending his three-year run in the same position at Arkansas.

FootballScoop.com and 247Sports.com also reported the move was expected. Neither TCU nor Arkansas have officially announced the change. ESPN's Chris Low reported that an official announcement is expected Thursday.

Briles, 40, would replace Garrett Riley, who left TCU to be offensive coordinator at Clemson last week. Riley was the 2022 Broyles Award winner as the nation's best assistant coach and helped the Horned Frogs to a national runner-up finish.

TCU head coach Sonny Dykes worked with Briles' father, former Baylor head coach Art Briles, for three seasons while both were assistants on Mike Leach's Texas Tech staff from 2000-02. Kendal Briles has extensive ties to the state of Texas, where he grew up and played college football at Texas and Houston before spending nine seasons at Baylor.

Briles would be the second Arkansas coordinator to be hired away this offseason. Former defensive coordinator Barry Odom was hired as UNLV’s head coach on Dec. 6.

Like Odom, Briles left after the Razorbacks initially warded off an advance by another program. Mississippi State reportedly showed interest in hiring Briles in early January, but Briles tweeted Jan. 5 that he was looking forward to returning to Arkansas to work another season with starting quarterback KJ Jefferson.

With Jefferson as a starter, Briles' offenses were among the best in program history the past two seasons. The Razorbacks ranked fifth in the SEC in total offense (471.2 yards per game) and sixth in scoring offense (32.5 points per game) in 2022.

Arkansas had the SEC’s second-best rushing offense with 236.5 yards per game, but struggled in the red zone with a conversion rate of 83%, which ranked 10th in the league.

Briles coordinated two of the 10 best offensive yardage totals in program history last season. The Razorbacks had 681 yards during a 55-53 victory over Kansas in three overtimes at the Liberty Bowl on Dec. 28, and gained 644 yards during a 52-35 victory at BYU on Oct. 15.

Briles, who also served as quarterbacks coach, oversaw good quarterback play during his tenure in Fayetteville. Feleipe Franks in 2020 and Jefferson the past two seasons recorded the three highest single-season completion percentages for the Razorbacks. The starters combined to throw 62 touchdowns and 13 interceptions under Briles.

The departures of Briles and Odom are the first among coordinators under Arkansas head coach Sam Pittman. Briles, Odom and special teams coordinator Scott Fountain were among Pittman’s first hires in December 2019.

Briles and Odom were given pay raises and contract extensions last year when Pittman said both were approached about other jobs. Briles’ contract was initially worth $1.2 million and ran through the 2024 season. His contract was scheduled to increase by $50,000 each year.

TCU would be Briles’ sixth program to serve as offensive coordinator. He had the same role at Baylor from 2015-16, then had one-year stints at Florida Atlantic, Houston and Florida State prior to being hired at Arkansas.

Briles is the fifth Arkansas assistant coach to leave this offseason. Linebackers coach Michael Scherer joined Odom at UNLV, tight ends coach Dowell Loggains was hired as offensive coordinator at South Carolina, and cornerbacks coach Dominique Bowman will reportedly be hired as an assistant at Temple.