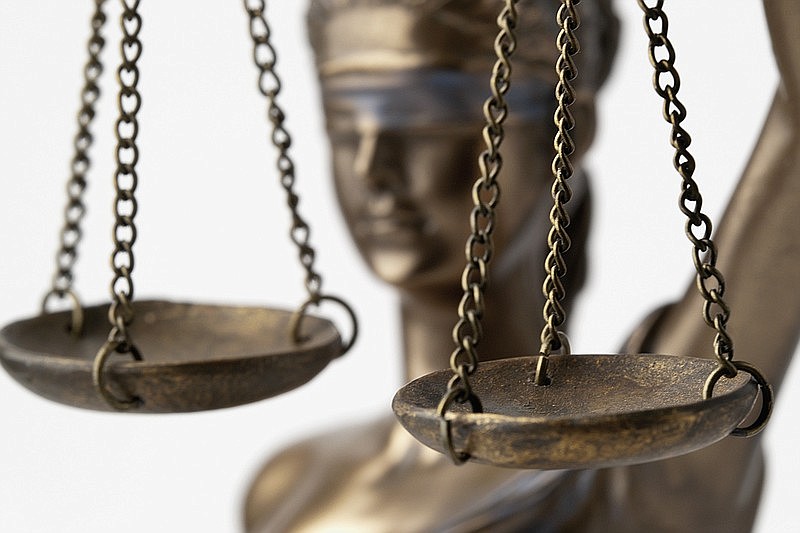 FORT SMITH -- The Crawford County Sheriff's Office is facing another federal civil rights lawsuit, the third concerning a reported use of force after a video showing law enforcement officers holding down and beating a man went viral in August.

Attorneys Adam Rose and David L. Powell of Fort Smith filed the initial lawsuit for Polly Risenhoover, 67, of Dyer in U.S. District Court on Jan. 10, according to court records.

The amended lawsuit, filed Jan. 12, accuses former Deputy Zack King, current Sheriff Daniel Perry, the Sheriff's Office and Crawford County of violating Risenhoover's rights under the Fourth and 14th amendments of the U.S. Constitution and, by extension, federal law, as well as committing negligence, battery and assault. It requests a jury trial and and relief for Risenhoover in light of the reported use of force.

King was dispatched as backup to a potential gun threat in Dyer about 7:23 p.m. May 20, 2021, according to the lawsuit. He and Joshua Winford, Dyer's police chief, arrived at the scene and were told the gunman was inside another home in the area. Everyone in the home was then ordered outside, which included the gunman, Risenhoover and her husband.

The lawsuit states Winford patted down Risenhoover and it was determined neither she nor her husband had any weapons on them. The reported gun was also discovered to have been an air pellet gun another man used to protect his dog.

However, the lawsuit states Risenhoover, who was 65 at the time, was isolated from her husband with King, who began trying to question her. Risenhoover insisted on asking him what was going on, at which point King reportedly became frustrated and tackled her to the ground. King proceeded to continually beat Risenhoover and pinned her hands and arms behind her back, according to the lawsuit.

"At no point during the incident did Defendant King attempt to use de-escalation tactics or subdue Mrs. Risenhoover with a taser and/or pepper spray," the lawsuit states.

Risenhoover was treated at a hospital the same day and continued to get treatment afterward, the lawsuit states. Although Risenhoover wasn't arrested on any offenses, she reportedly suffered an injury to her back, body and head requiring continual medical treatment.

The force King used "was in excess of any force required to take Mrs. Risenhoover in custody and maintain her in custody" and injured her, the lawsuit states.

The initial complaint filed Jan. 10 listed Winford, the city of Dyer and the Dyer Police Department as defendants, in addition to King, court records state. However, they were terminated from the case after the amended complaint was filed Jan. 12.

The amended lawsuit states although Perry, who was elected sheriff in 2022, didn't hold his position when this incident took place, he's currently the final authority for making decisions with respect to the Sheriff's Office's actions in Crawford County.

No response to the lawsuit had been filed in federal court as of 5 p.m. Tuesday, according to court records.

The first was filed Aug. 29 on behalf of Randal Worcester, 27, of Goose Creek, S.C., after King, then-Crawford County deputy Levi White and officer Thell Riddle of the Mulberry Police Department were recorded on video using force while arresting Worcester on Aug. 21 outside a Mulberry convenience store. The video showed the officers repeatedly punching and kneeing Worcester, as well as telling a bystander to get away from the scene.

An officer identified as White in Worcester's lawsuit was also shown slamming Worcester's head to the pavement. Worcester was released from jail Aug. 22 on $15,000 bail.

White and King were fired effective Sept. 29 with a recommendation for decertification due to "excessive use of force," according to records provided by the Arkansas Division on Law Enforcement Standards and Training. They had been suspended with pay after Worcester's arrest.

Riddle was still on administrative leave as of Dec. 20, according to Mulberry Police Chief Shannon Gregory.

Attorney Emily White has said she was appointed special prosecuting attorney for the Arkansas State Police's independent investigation into the use of force in Worcester's arrest. She received the investigative file from the state police on Sept. 2.

The U.S. attorney's office for the Western District of Arkansas, the Department of Justice and the FBI's field office in Little Rock also opened a civil rights investigation into the incident, according to authorities.

White filed a counterclaim to Worcester's lawsuit Oct. 6 accusing Worcester of battery and asking for a judgment against Worcester for the damages Worcester reportedly inflicted on him Aug. 21. A jury trial for the lawsuit is scheduled for Sept. 11, with Worcester now being represented by the Oklahoma City-based attorney Rachel Bussett, according to court records.

Sarah Trammell, 44, of Uniontown filed a similar lawsuit through Rose and Powell against King, the Sheriff's Office, Crawford County and Damante on Oct. 14 in connection with a reported use of force during an arrest of Trammell on June 19.

The case was initially set for trial Oct. 23 in Fort Smith, according to court records. However, U.S. District Judge P.K. Holmes granted a joint motion to stay Dec. 21, putting the lawsuit on hold for 90 days or until a criminal case against Trammell in Crawford County Circuit Court is resolved.

Trammell pleaded not guilty June 30 in Crawford County to felony charges of second-degree battery on a law enforcement officer and breaking or entering in connection with her arrest, on top of misdemeanor charges of unauthorized use of a vehicle and resisting arrest, according to court records. A jury trial is set for Feb. 23.

Randal Worcester pleaded not guilty in Crawford County Circuit Court on Dec. 14 to charges stemming from his arrest. This includes felony charges of first-degree terroristic threatening and second-degree battery, in addition to misdemeanor charges of resisting arrest, possessing an instrument of crime, obstructing governmental operations and disorderly conduct.

A pretrial hearing has been set for 9 a.m. April 4 in Van Buren.