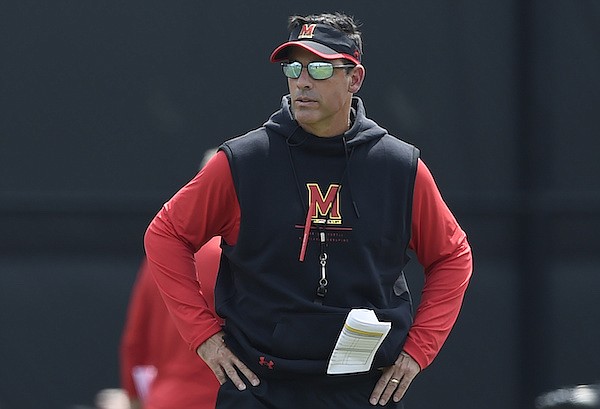 FAYETTEVILLE — Arkansas has hired Dan Enos as offensive coordinator, a title he held from 2015-17.

Enos, 54, has spent the past two seasons as offensive coordinator at Maryland. He also had one-year stints as an assistant coach at Alabama (2018), Miami (2019) and Cincinnati (2020) after he was let go at Arkansas following a head coaching change.

Arkansas head coach Sam Pittman was the Razorbacks’ offensive line coach when Enos was hired before the 2015 season. The men worked one season together until Pittman took an assistant coaching job at Georgia.

"Great to have Dan Enos back in Fayetteville," Pittman tweeted Thursday. "So honored he wanted to be a part of this Great University again!"

Enos will replace Kendal Briles, who ESPN reported has accepted the offensive coordinator position at TCU. ESPN’s Chris Low reported that Briles to TCU might be announced Thursday.

Briles was one of Pittman's first hires at Arkansas and has coordinated the Razorbacks' defense the past three seasons.

Maryland ranked 55th nationally in total offense (401.2 yards per game) and 66th in scoring offense (28.2 points per game) in Enos’ second season with the Terrapins in 2022. Both totals ranked fourth in the Big Ten.

Enos coordinated Arkansas offenses that averaged 35.9, 30.3 and 28.8 points in his three seasons under former head coach Bret Bielema. Arkansas was one of two Football Bowl Subdivision programs with a 3,000-yard passer and a 1,300-yard rusher in 2015 (Brandon Allen and Alex Collins) and 2016 (Austin Allen and Rawleigh Williams).

Enos was initially hired by Michigan after he was let go by Arkansas, but accepted a job at Alabama that same offseason. He worked in non-coordinator roles at Alabama and Cincinnati, and coordinated Miami’s offense in 2019 when the Hurricanes averaged 367.2 yards and 25.7 points.