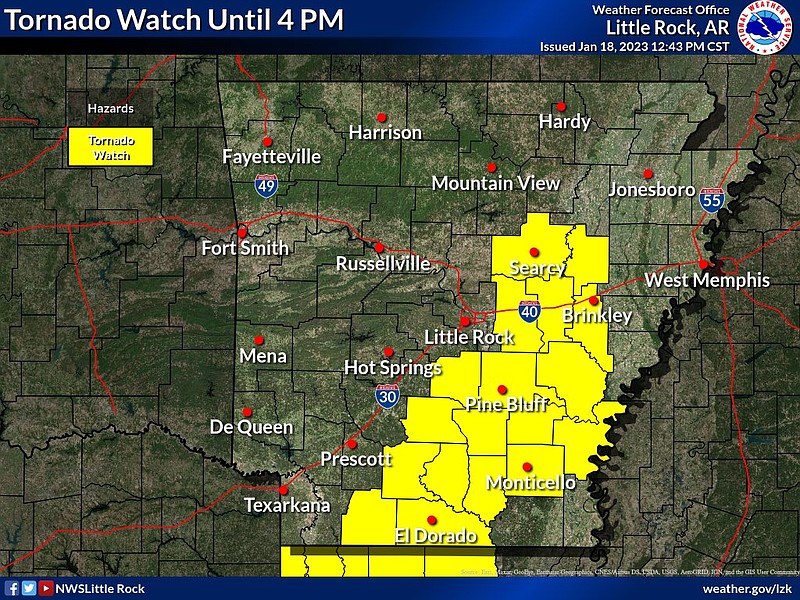 Portions of southern and eastern Arkansas were under a tornado watch on Wednesday, according to this National Weather Service graphic.

Several counties in the south and southeast part of Arkansas will remain under a tornado watch until 4 p.m., forecasters said.

The watch means a couple of strong tornadoes are possible, along with winds up to 75 mph and hail that could be as big as a ping pong ball, a tweet from the weather service in North Little Rock said.

"An additional tornado watch may be needed east of the current watch," the weather service said in a tweet, though no such watch had been issued at 1 p.m.

Several tornado and severe thunderstorm warnings had been issued for south Arkansas but have since expired, according to forecasters.

Drew County had just over 45 members without power at about 2:30 p.m., according to an Electric Cooperatives of Arkansas outage map.

The utility’s map indicated a total of roughly 60 customers were without power across the state.

Entergy's outage map showed that about 2,000 of its customers were without power in Union County at about 2:30 p.m. Columbia County had just 350 outages.

The utility reported roughly 3,000 of its customers were without power in Arkansas.

The estimated restoration time for some of the outages in Union County was 10 p.m. Thursday.

"A thunderstorm has moved through your area causing numerous outages and widespread damage to the power systems. Restoration efforts are underway. The estimated time of restoration could change as all damage assessments are completed," the map said in a description of the outage.

Much of the eastern half of the state was at a slight risk for severe weather on Wednesday, a briefing from the weather service states. Updated information had shifted the slight risk area more west into the state compared to Tuesday, according to the briefing.

A slight risk of severe thunderstorms means that a storm could produce hail, damaging winds or tornadoes, according to a tweet from the weather service. These storms are the kind Arkansas may experience a few times a year.

“All thunderstorms imply lightning and the potential for flooding,” the post said.

“Showers and thunderstorms will be likely throughout the day today into tonight across Arkansas, especially across central, the southern flank, and the eastern flank of Arkansas,” according to the briefing.

The greatest risk for strong to severe storms will be across central, eastern and southern parts of the state, forecasters said. Meteorologists are expecting the storms to be strongest on Wednesday afternoon through Wednesday evening, the briefing said.

Due to the rainfall expected during the storms forecasters said isolated flash flooding may be possible until the evening.

The simulated radar images showed most of the storms east of the state by 6 p.m. on Wednesday, forecasters said.