UAPB makes it formal with Hampton 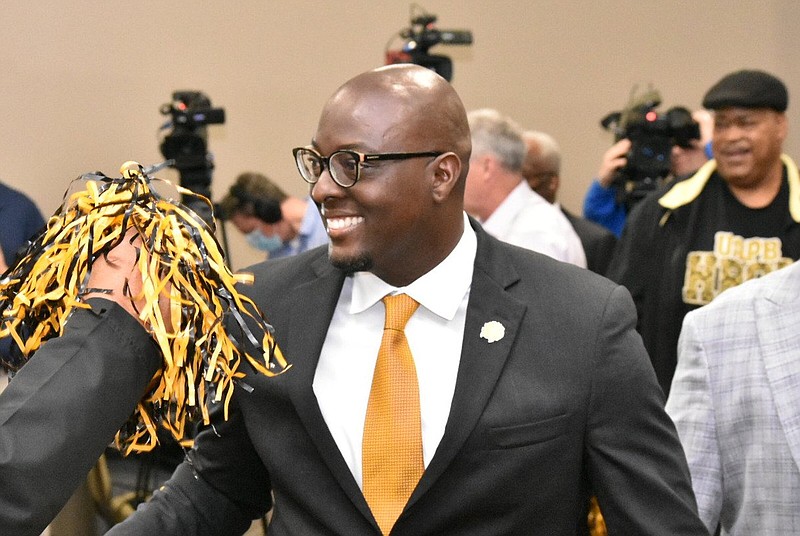 Alonzo Hampton was formally introduced as the University of Arkansas at Pine Bluff's 22nd head football coach at something a lot more festive than an ordinary news conference.

Complete with the marching band, cheerleaders and dancers, Tuesday's opportunity for the public to meet Hampton took on the scene of a pep rally. One cheerleader helped the Golden Lions faithful get in the mood and dancing to the Gap Band's 1983 hit "Party Train."

Nicknamed "Champion" -- he won a 400-meter state track title at Warren High School -- Hampton shared his feelings of the day inside a full STEM Conference Center: "It feels great to be a Golden Lion."

Hampton was welcomed warmly amid the anticipation of a long-awaited turnaround season in Pine Bluff. The Golden Lions have gone 5-17 the past two seasons after reaching the Southwestern Athletic Conference championship game in the spring 2021 season. The slide resulted in Doc Gamble's dismissal on Oct. 20 and led to Hampton's hiring, which took effect Dec. 22.

Hampton had always set his sights on coming back to the school that first allowed him to coach on a collegiate level, even after reaching the heights of the University of Oregon and University of Arkansas. He most recently was assistant head coach at the University of Louisiana Monroe.

"It was just four great years," said Hampton, who coached under the late Mo Forte and Monte Coleman from 2006-10. "I was able to grow not only as a spiritual man but also as a football coach. Obviously, when I left here, this place allowed me to move up in the coaching profession. As I continued to move around the country, this was always a place I said I wanted to come back and lead one day.

"... I've always inquired about the job, but it was never the right fit. This time, it was the right fit, and that's how I'm here."

"One thing with Alonzo, [it was] having the connection here and coaching here, at Warren and coaching at Dumas, volunteering to come to the University of Arkansas at Pine Bluff, taking that step and then going off and exploring, getting that experience beyond the borders of the state of Arkansas and always having that desire to come back home, keeping a good relationship -- everywhere he went, he was the guy to come back to this area and recruit -- having that tenacity and desire to come back and be successful," Robinson elaborated.

Hampton's coaching journey took him from Warren -- where as a defensive coordinator he helped the Lumberjacks to back-to-back AAA state titles in 2001-02 -- to being head coach at Dumas High from 2004-05, to joining UAPB as a volunteer assistant under Forte and ultimately becoming defensive coordinator under Coleman, to several stops on the Football Bowl Subdivision level under Willie Taggart and most recently assistant head coach under Terry Bowden at the University of Louisiana Monroe.

Rather than break down the X's and O's as many head coaches do in their introductory speeches, Hampton said the offensive and defensive systems he's bringing to UAPB will be "likable and learnable." He also reiterated a commitment to academic performance and recruiting in UAPB's backyard -- southeast Arkansas and the Delta -- working inside the region and then moving on to surrounding areas.

"We will restore the pride," Hampton said, echoing a common desire of university officials during the search. "We will unite the fan base, and to do that, we have to recruit the best local talent."

Before post-conference interviews with the press, Hampton was met with pointed questions from some familiar faces across southeast Arkansas.

"How will you find the Jims and Joes to match the X's and O's?" former Pine Bluff and Dollarway schools superintendent Frank Anthony asked. There's plenty of "untapped talent" in the region, Hampton answered.

Doug Spencer, Hampton's track coach at Warren, asked: "Will you allow your players to run track?"

Hampton responded: "If you can compete and letter, you can run. If not, you can run with me." Hampton revealed that he has a player competing in indoor track.

Former Dollarway and McGehee schools superintendent Thomas Gathen asked how Hampton plans to succeed despite being behind the "8-ball" in recruiting. Hampton was hired during the early signing period for Division I football teams, and the Lions did not sign a recruit.

"We will do more with less," Hampton responded. "We'd like to be able to sign five or six local kids. I'm not worried about being behind the 8-ball. I'm worried about getting the right kids."

Hampton shares a special connection with the educators, all of whom he considers mentors. He grew emotional when thinking about growing up with Anthony's son and another friend in Warren.

There's also the matter of finalizing his staff in Pine Bluff. Hampton said he spoke with the current assistants.

"I told the search committee when I got here I wanted to evaluate the coaches here on staff. They've been with me for eight or nine days now. I think I've done right by them, but obviously now it's time to get some of my guys here and do what we need to do. I'm excited about the staff I'm going to hire, and they're ready to work. I'm hiring guys that want opportunities to do something great. That's where we're at."

"We have to find a way to keep certain athletes here," Hampton said. "At the University of Louisiana Monroe, we had the lowest budget in the FBS. A student-athlete's stipend was less than $200, but you don't know how far that took an athlete."

"When the football team does well, the city does well." 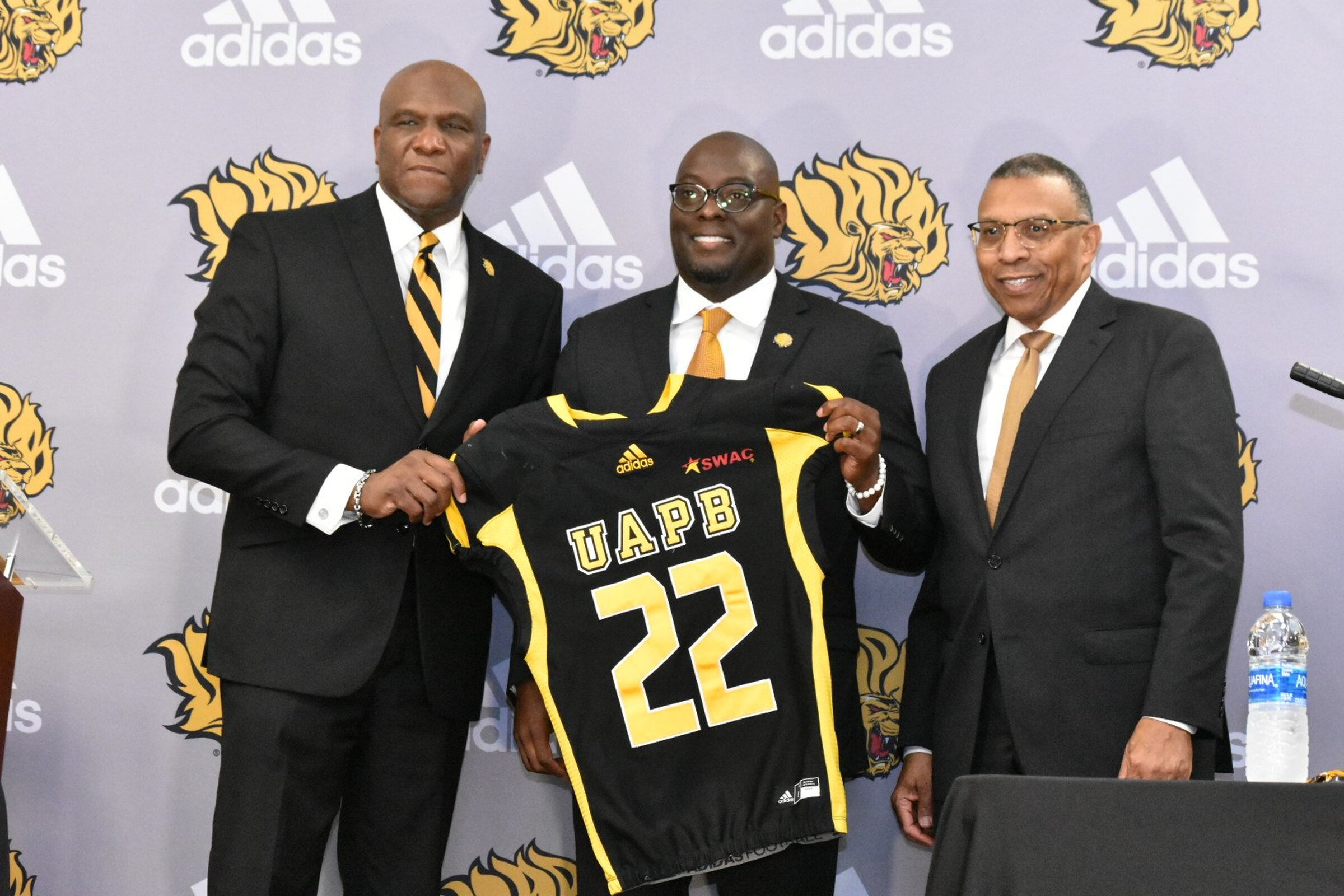 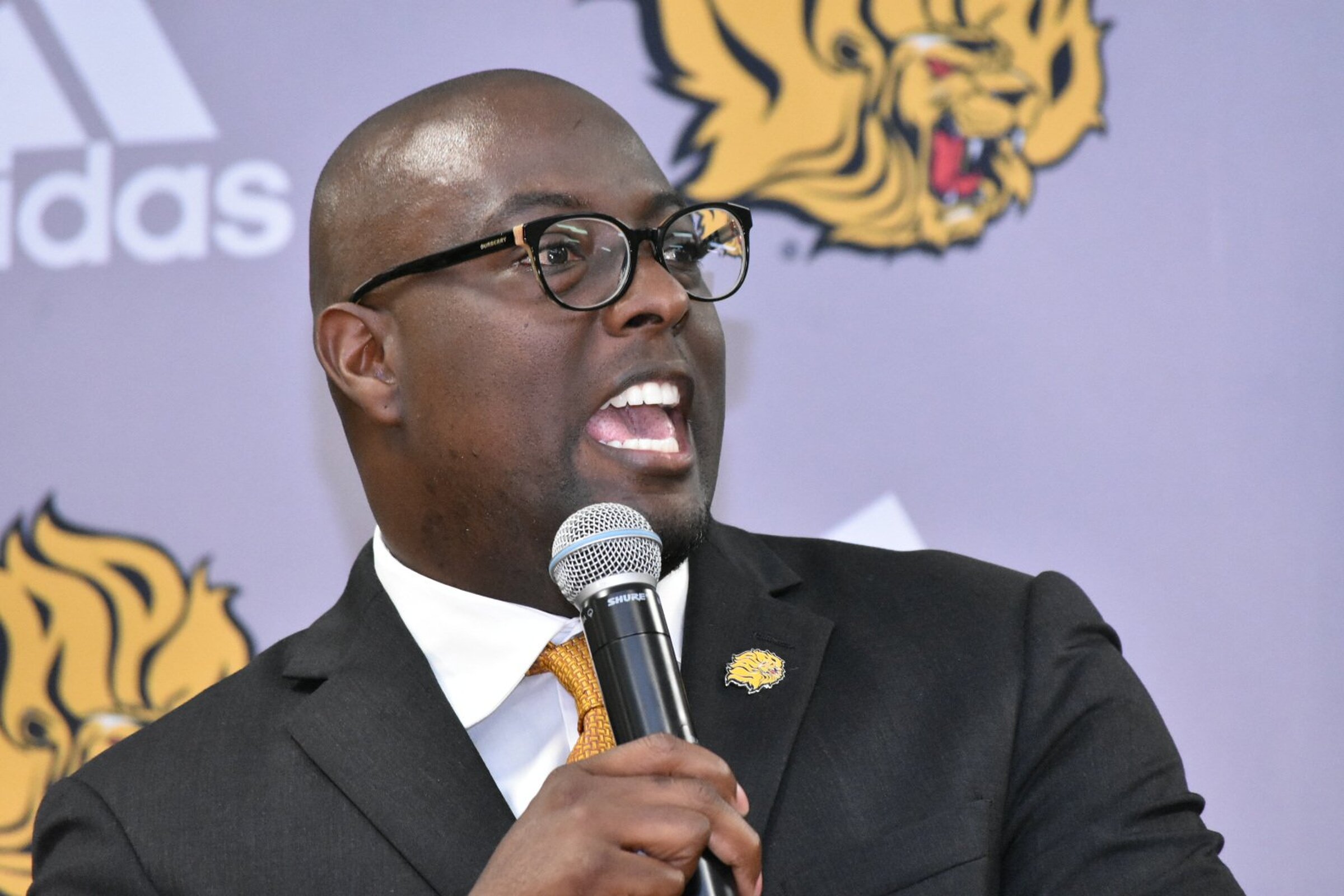