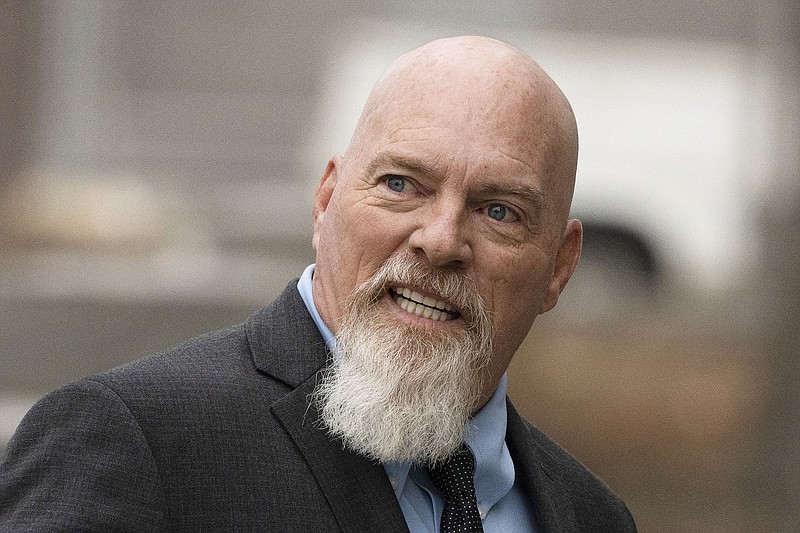 Richard Barnett, an Arkansas man who was photographed with his feet on a desk in House Speaker Nancy Pelosi's office during the Jan. 6 U.S. Capitol riot, arrives at federal court in Washington, Tuesday, Jan. 10, 2023. (AP Photo/Manuel Balce Ceneta)

WASHINGTON -- Richard "Bigo" Barnett is "a crazy man from Arkansas who got pushed into the Capitol and put his feet up on a desk," his attorney said in court on Wednesday.

"The government alleges that the act of putting his feet on a desk equated with disrupting Congress. It did not," Joseph D. McBride, one of Barnett's attorneys, said Wednesday during his opening statement in Barnett's U.S. Capitol riot trial.

McBride was referring to the joint session of Congress that met on Jan. 6, 2021, to certify the electoral vote indicating Joe Biden had won the presidential election. The procedure was disrupted for several hours by a riot in and around the Capitol.

Barnett's trial began Jan. 9 in federal court in the District of Columbia. The government finished presenting its witnesses on Wednesday afternoon.

Barnett, 62, of Gravette, faces eight charges in connection with the riot. He faces enhanced charges alleging that he entered the Capitol with a dangerous weapon -- a Hike 'n Strike Walking Staff, which is a combination walking stick/flashlight/stun gun that he bought at a Bass Pro Shop in Rogers a week before the riot.

Barnett got worldwide attention after he posed for photographs with his foot on a desk in House Speaker Nancy Pelosi's office suite.

Everybody has that crazy uncle or family member, McBride told the jury during his opening statement.

McBride said the evidence will show that "life in Arkansas is completely different from life in the big city" and that Barnett -- a former firefighter and bull rider -- "was running around like he was in Arkansas."

Testimony resumed Wednesday morning with FBI Special Agent Kimberly Allen on the stand. Three FBI agents from Arkansas had testified on Tuesday. Allen was still on the stand when U.S. District Judge Christopher R. Cooper recessed court at the end of the day Tuesday.

Allen is the FBI's agent in charge of Barnett's case.

In court on Wednesday morning, she demonstrated the Hike 'n Strike stun device, which has been a central focus in Barnett's trial.

Allen loaded the Hike 'n Strike with batteries, removed the cap near the handle and activated the device for five seconds to show the jury how it worked.

It made a loud clicking noise and bright light flashed from the spike electrodes on the end near the handle.

"Get her to cap that thing," Cooper said after the demonstration.

Barnett's lawyers argued that the stun gun wasn't operable while he was in the Capitol. They cited videos in which a red light on the device -- indicating it was on -- couldn't be seen.

On Wednesday afternoon, Assistant U.S. Attorney Michael Gordon asked Allen, who was still on the stand, to reload the Hike 'n Strike with batteries and step down from the stand to floor level, next to the jury box.

As Gordon was putting the stun gun away, he briefly activated it, causing the loud clicking sound and a flash of light.

"Oh, sorry," he said, causing a quick burst of laughter in the courtroom.

During his opening statement, McBride said Barnett's hand was bleeding while he was in the Capitol because he cut it on the spike electrodes that protrude from the handle end of the Hike 'n Strike when it's not capped.

McBride said Barnett bled on an envelope in Pelosi's office, so he took "the bio-hazard" with him and left a quarter on the desk for compensation. Emily Berret, then chief of operations for Pelosi's office, testified last week that she found the quarter on her desk but she threw it in the trash because it was covered in blood. She also found a note that said, "Hey Nancy, Bigo was here, Biotch."

Barnett was incarcerated in the District of Columbia jail for almost four months before being released on his own recognizance.

In court on Wednesday, the government played one of Barnett's jail calls to his significant other, Tammy Newburn. In the call, Barnett tells Newburn to copyright the phrase he wrote in the note he left for Pelosi.

"He wanted to copyright the phrase because he didn't want anybody else to make money off of it," said Allen.

One of the charges against Barnett is theft of property for taking the envelope from Pelosi's office. It was addressed to a congressman and had speaker of the House as the return address.

McBride said Barnett needed a walking stick for walking that day at the Capitol. He was 60 years old at the time with a bad back, knee and shoulder.

Allen testified that in all the videos from the Capitol riot, she never saw Barnett use the Hike 'n Strike as a walking stick. Allen said she also never saw him use it "in battle."

In one video of Barnett confronting a Metropolitan Police officer in the Capitol Rotunda, Barnett has his hand on the stun gun. Barnett had left an American flag on a 10-pound steel pole on a credenza in Pelosi's office, and he repeatedly asked police officers to go get it for him.

Officer Terrence Craig testified that a riot was underway and that retrieving Barnett's flag was the last thing on his mind, no matter how much he yelled about it.

The government presented video from the FBI's interview with Barnett on Jan. 8, 2021, in Bentonville. In the video, Barnett said he saved a "little girl's life" because she was pinned by the crowd going into the Capitol. Barnett said he "pulled her loose," they fell to the floor and were trampled.

Barnett said he got up, and ran down the hall to Pelosi's office.

Gordon asked if those things were true, and Allen said no. She said Pelosi's office was a considerable distance from the east door, where Barnett entered, and he walked once he got inside. Video was presented to corroborate her testimony.

Barnett told the FBI that a police officer instructed him to leave Pelosi's office and he said, "Yes, sir."

That wasn't true either, said Allen.

During cross examination, McBride asked Allen what Barnett did to impede Craig in his line of duty, which resulted in a charge of civil disorder against Barnett.

Allen testified that Barnett was threatening to "bring a crowd forward" to break through the police line.

"Evidence will show that he did not impede officer Craig in any way," McBride said during his opening statement.

Throughout the trial, the government has presented several of Barnett's Facebook posts about a Stop the Steal rally planned for Washington on Jan. 6, 2021.

In a response to a Facebook post from Dec. 30, 2020, Barnett wrote: "It's going to be wall to wall. Avoid the middle of the crowd. Once you have your bearings and a good location, plan at least a rough escape route. Be prepared to defend yourself if needed. Stun guns are legal as is pepper spray. Look it up. Anything else you carry is your business."

According to testimony from a Capitol Police officer, stun guns are illegal in U.S. Capitol buildings.

"I think it's fair to say a lot of his posts were hooting and hollering," McBride said Wednesday while cross examining Allen. "He's like the crazy redneck from Arkansas who's barking at the moon."

Also testifying for the defense on Wednesday was Mark Snell, an expert on crowds.