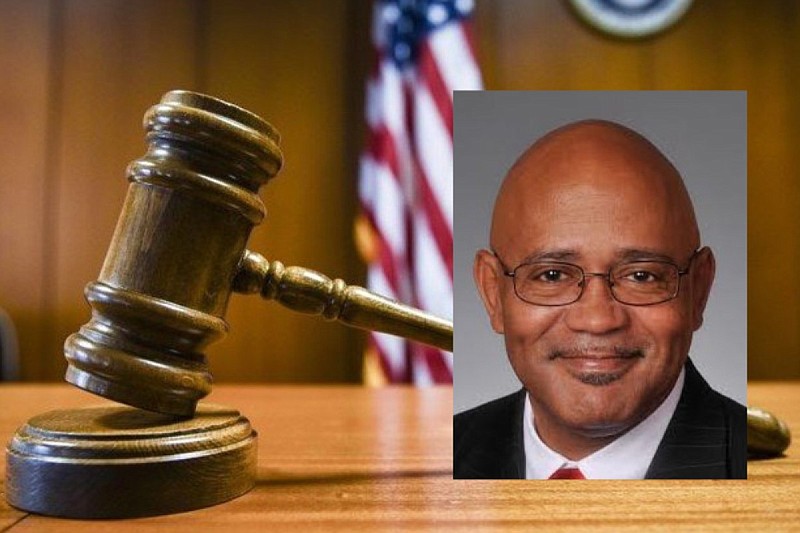 A former state legislator and county judge was sentenced to a year and a day in prison and ordered to pay $123,000 restitution to the state Wednesday for his part in a bribery scheme involving a nonprofit that provided Medicaid-funded counseling services to troubled youth and adults in Arkansas.

At his April 2018 plea hearing, Wilkins admitted to accepting more than $80,000 in cash and donations for himself and his church, St. James United Methodist Church in Pine Bluff, where he was the minister, between 2010 and 2014. He admitted to directing legislation to benefit Preferred Family Healthcare of Springfield, Mo., and was one of a number of state lawmakers ensnared in illegal dealings with executives of the nonprofit, including Jeremy Hutchinson of Little Rock, a former state senator, and Eddie Wayne Cooper of Melbourne, a former House member.

More than 50 supporters crowded into the gallery of the federal courtroom beginning more than a half-hour before the hearing began in Little Rock. About 10 minutes before the scheduled 1 p.m. start time, the Rev. William Shaw, pastor of Pleasant View Baptist Church in Pine Bluff led the assembly in a brief prayer.

Citing Wilkins' age and health problems, his attorneys, Bill Stanley of Jonesboro and Ronald Davis of Little Rock, asked Miller to consider sentencing Wilkins to probation. He faced a possible five-year maximum prison sentence and $250,000 fine for the offense.

Stanley argued that Wilkins' health conditions should be taken into account. The lawyer said Wilkins has had multiple back surgeries and spinal surgery, and must take nerve blocking injections every two to three months in order to maintain mobility. He said Wilkins was also recently diagnosed with renal failure.

"He has been told [dialysis] is a very real possibility," Stanley said, suggesting that a prison sentence for Wilkins could be a life sentence.

"I'll tell you what's on my mind so that ... you're not shooting in the dark," Miller said. "You all know the position I've taken on public officials who have stolen from their campaigns or who have been paid off or that sort of thing. I've generally taken a very harsh point of view on that."

Comparing Wilkins' offense to that of former state Senator Paul Bookout, whom Miller sentenced to 18 months in 2016 for diverting campaign funds for personal use, Miller said he found Wilkins' conduct to be worse.

"Does [Wilkins] deserve [18 months] for what he did?" Miller asked. "I think the answer to that question is yes ... if you just take the two crimes and ask which is worse, I would say Mr. Wilkins' crime is worse than Mr. Bookout's crime. I'm probably not giving him three years but I'm also probably not going to give him probation, either."

Davis argued that Wilkins' assistance to government prosecutors was valuable enough that it should warrant considerable leniency. He said Wilkins' remorse was exemplified by his cooperation with federal investigators.

Wilkins was scheduled to testify late last year in the corruption trial of Preferred Family Healthcare executives Tommy and Bontiea Goss that was canceled less than a week before it was to begin when both Gosses pleaded guilty to federal conspiracy counts.

Even so, Assistant U.S. Attorney Stephanie Mazzanti, arguing for a 60-month sentence, said that Wilkins' cooperation had already been factored into his plea agreement. She said when elected officials engage in bribery schemes, "it undermines our democracy." She said elected officials ask for the trust of citizens to put them in office and when they take bribes, "they take that trust and they stomp on it."

"They damage our democracy," she said. "They damage the trust the people of Arkansas put in them and they should be held to account."

By funneling the bribes through his church, she said, Wilkins not only attempted to hide his involvement but betrayed the trust of his congregation as well, part of which involved what Mazzanti characterized as the most blatant form of bribery known.

"Cash in an envelope," she said. "Not once and not twice, but on multiple occasions ... over and over again over a period of years."

A prison sentence, Mazzanti said, would provide general deterrence to others who may otherwise think age and infirmity might give similar offenders a pass on such offenses. She said Wilkins did cooperate with investigators -- which she said led to more indictments that further delayed proceedings -- and that he did demonstrate profound remorse for his actions, but that he should still be punished, "in the public sphere ... in a way that will hopefully deter others."

Miller agreed, but only to a point.

"I don't think Mr. Wilkins deserves to go to prison for 37 or 46 months and possibly end up dying in prison," he said. "But I don't think probation is appropriate. I think he has to serve some time ... I think 12 months and a day is the appropriate sentence here."

Miller added that a more appropriate sentence for the offense would be as much as five years in prison but taking into consideration Wilkins' health and his age along with his level of cooperation, "if I sentence him to three years and he dies in prison, I couldn't live with myself."

In addition to 12 months and a day in prison, Miller ordered Wilkins to serve three years' supervised release when he leaves prison. Allowing him to remain free until he is designated by the Bureau of Prisons, the judge ordered him to report to his designated facility on March 7 by 2 p.m.

After the hearing, Stanley called the sentence a fair one.

"The judge made it very well known what the basis for his sentence was," Stanley said. "We agree with his decision and we respect it. While we were pushing for probation due to Mr. Wilkins' age and health conditions, we certainly appreciate the judge taking all of that into consideration."

"Public corruption is a malignant cancer on our democracy," Ross said. "When public officials take payment or favors for official acts, they should know we intend to hold them accountable."