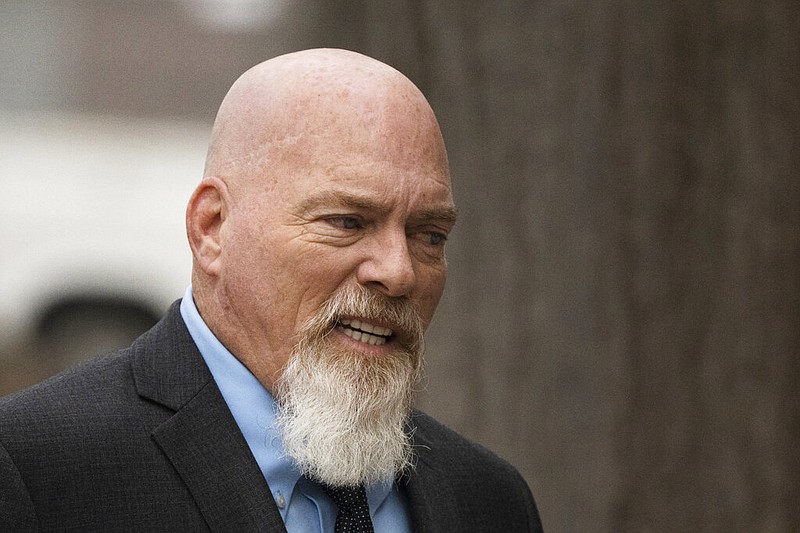 Richard Barnett, left, an Arkansas man who was photographed with his feet on a desk in former House Speaker Nancy Pelosi's office during the Jan. 6 U.S. Capitol riot, arrives for the jury selection at federal court in Washington, Tuesday, Jan. 10, 2023. (AP/Manuel Balce Ceneta)

WASHINGTON — Richard “Bigo” Barnett testified today that he shouldn’t have called House Speaker Nancy Pelosi a certain word in a note he left in her office during the U.S. Capitol riot on Jan. 6, 2021.

Barnett, 62, of Gravette got worldwide attention after being photographed with his foot on a desk in Pelosi’s office suite. He left a note behind that read, “Hey Nancy, Bigo was here, beotch.”

Barnett's testimony followed his earlier statement under oath that his stun gun wasn’t operable on Jan. 6, 2021.

Barnett began testifying late this morning and will resume testifying Friday morning. Closing arguments are expected after his testimony.

WASHINGTON — Richard “Bigo” Barnett testified Thursday that the Hike ‘n Strike Walking Staff stun gun that he took into the U.S. Capitol on Jan. 6, 2021, wasn’t operable, possibly because he had dropped it in his hotel shower the night before.

Barnett said he returned to his hotel after a night of drinking, turned on the shower, started “stripping down,” and dropped the Hike ‘n Strike in the shower.

“After I got it wet, I dried it off but it didn’t work,” said Barnett.

Barnett said he thought perhaps the batteries were dead since he had “played with” the device since buying it a week earlier at the Bass Pro Shop in Rogers, but he didn’t have time to buy batteries before heading to The Ellipse, where a Stop the Steal rally was to take place on Jan. 6, 2021.

Barnett, 62, of Gravette, faces eight charges in connection with the Capitol riot. He faces enhanced charges alleging that he entered the Capitol with a dangerous weapon — the stun gun.

Barnett got worldwide attention after he posed for photographs with his foot on a desk in House Speaker Nancy Pelosi’s office suite.