Aggressive China a factor in accord by Christian Davenport The Washington Post | January 19, 2023 at 4:16 a.m. 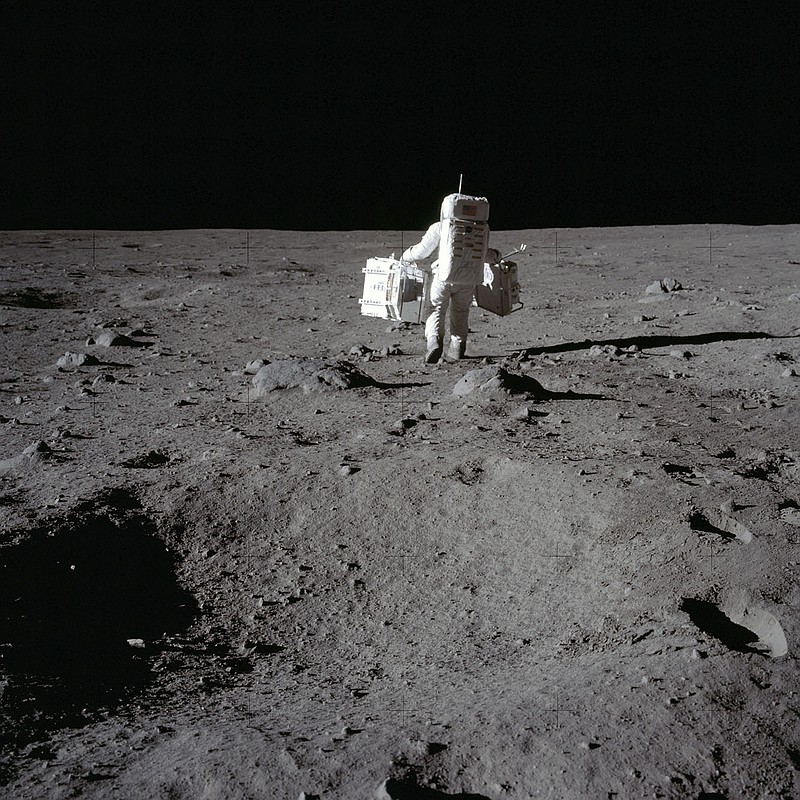 Astronaut Buzz Aldrin conducts science experiments at Tranquility Base on the surface of the moon in this July 20, 1969, photo taken by fellow astronaut Neil Armstrong. The historic Apollo 11 landing site is provided protections under the Artemis Accords, a set of rules for the peaceful use of space and the moon and a buffer against China’s space exploits. (AP/NASA/Neil Armstrong)

More than 20 countries have signed on to what NASA calls the Artemis Accords, a legal framework that establishes rules for the peaceful use of space and governs behavior on the surface of the moon. The accords would require countries to adhere to a set of rules, such as publicly sharing scientific discoveries and creating "safety zones" where nations could work undisturbed on the lunar surface. But the accords are designed to do far more. They are intended to foster an alliance in space that would allow the United States to finally return to the moon and create an enduring presence there -- a key step in what some consider to be a space race with China.

The accords are perhaps the most ambitious international space policy effort since the Outer Space Treaty of 1967.

In conjunction with the State Department, NASA has sought to create a broad coalition under the accords, with traditional allies such as Canada and France, as well as countries seeking to build their space programs, such as the United Arab Emirates, Nigeria and Rwanda.

"The reaction from the international community was palpable -- the excitement, the hope for the re-engagement for the U.S. to again lead," said Mike Gold, a space industry official who was one of the key framers of the accords at NASA. "Our partners don't want to work with the Chinese, by and large, but if America fails to lead, they'll have no other choice."

In the past several years, more countries have developed space programs, striking out deeper into the cosmos. Israel and India tried in 2019 to land spacecraft on the moon. Last August, South Korea sent a spacecraft that reached lunar orbit in December. And late last year, ispace, a Japanese company, launched a lunar lander toward the moon on a SpaceX Falcon 9 rocket.

But the country that is of greatest interest -- and concern -- to the United States is China, which has begun to erode the technological lead that Americans have held for decades. In 2019, China landed a spacecraft on the far side of the moon, a historic first. In 2021, it landed a rover on Mars, becoming the only country besides the United States to successfully deploy a vehicle on the Red Planet. It also has assembled a space station of its own in Earth orbit at a time when the International Space Station is aging, and the relationship between the United States and Russia, the two main partners on the ISS, has grown tense as a result of Russia's invasion of Ukraine.

If the Cold War space race of the 1960s required a military-like effort to muster the resources to beat the Soviet Union to the moon, the race of today is more of a soft-power endeavor designed to gather allies and create rules for the peaceful use of space. The fact that NASA would partner with Saudi Arabia, which the U.S. government has blamed for the 2018 killing of Washington Post contributing columnist and U.S. resident Jamal Khashoggi, is evidence of how expansive Washington wants the coalition to be, NASA officials have said.

Today's space race is also far more dynamic than the one that took place 50 years ago. Instead of just reaching the moon, the United States and China want to mine it, laying claim to the water that exists in the form of ice and other precious resources, such as metals and even oxygen stored in the lunar regolith.

During the Trump administration, China's space ambitions were a rallying cry to galvanize NASA -- and Congress -- to move with greater urgency. In calling for NASA to significantly accelerate its return to the moon, Vice President Mike Pence said in a 2019 speech that the United States was in a race with China, casting it as a reprise of the space race against the Soviet Union to the moon. He said that China's goal was "to seize the lunar strategic high ground and become the world's preeminent spacefaring nation."

After President Donald Trump was defeated by Joe Biden, there was widespread concern in the space community that the new administration would kill the Artemis program. Instead, the Biden White House embraced it, making it the first lunar human exploration campaign to survive successive administrations since the Apollo era.

It has also echoed the Trump administration's hawkish rhetoric about China. Bill Nelson, who was made the NASA administrator by President Biden, has called China "a very aggressive competitor" and recently issued a warning: "Watch the Chinese." NASA is effectively barred from partnering with China in space by a 2011 law that was passed because of fears that it would steal U.S. technology.

In an interview, Pam Melroy, the deputy NASA administrator and a former astronaut, said she was concerned about how China and others might act on the moon, particularly when extracting resources, such as water ice. "Does it make me nervous?" she said. "Yes, especially with China."

That, she said, is "one of the reasons why the Artemis Accords are so very important. Just having a partnership so that we are transparent and clear and everybody has an understanding of what we are trying to achieve."

Signatories to the accords agree, for example, to help provide emergency assistance in the case of an injured astronaut. They would also agree to protect historic sites, such as the Apollo 11 landing area. They would also pledge to be transparent about their plans for space and share scientific data.

The accords would allow countries or companies to create "safety zones" so they could work to extract resources without interference, which will be critical if multiple nations are vying for the same resource in the same place -- such as the lunar south pole, where both NASA and China are interested in going.

An international coalition would also help efforts to create rules of the road in the now largely lawless expanse of space, which is becoming increasingly polluted with debris that threatens sensitive satellites and even the ISS. The situation got even worse last year when Russia blew up a dead satellite, scattering hundreds of pieces of debris and forcing NASA astronauts and Russian cosmonauts to put on their spacesuits and take shelter inside their spacecraft in case the station was struck.

"We and the other original signatories of the Artemis Accords came together to think about that next era of space exploration and make sure that it was being implemented in accordance with the fundamental principles of responsible behavior," Melroy said late last year at an event celebrating the accords.

With so many nations agreeing to a set of rules, "China and Russia now have a precedent to cope with, and there's pressure to articulate how they are going to implement their international obligations," Gold said.

NASA has grown increasingly frustrated with China launching rockets, only to have their first stages fall uncontrollably back to Earth. That is against the norm -- typically rockets fall into the ocean, or return with a soft landing, as SpaceX's Falcon 9 does -- and it is potentially threatening to populated areas.

"It is critical that all spacefaring nations are responsible and transparent in their space activities and follow established best practices, especially, for the uncontrolled reentry of a large rocket body debris -- debris that could very well result in major damage or loss of life," Nelson said in a statement in November.

The accords also offer another potential benefit: To make it more difficult for future presidential administrations to kill the Artemis program, a trend that has plagued NASA's deep space exploration efforts for decades. That was the thought of the architects of the accords, and it proved true after the Biden administration picked up where Trump's left off, keeping the program and continuing to recruit other nations to join. Now more than 20 have signed, including Bahrain, Brazil, Colombia, Israel and Singapore, creating a broad coalition embraced by Republicans and Democrats.

"Sustainability was a key reason that the Artemis Accords are so important," Gold said. "If you look at NASA's past efforts, failure at creating a beyond-low-Earth orbit human exploration mission wasn't just an option, it was a certainty. That's in stark contrast to the International Space Station, which has been the crown jewel of global human spaceflight for decades. There were two reasons for that. First, because it was international, it enjoyed global support and cooperation. Second was bipartisanship within Congress."

If the partnership on the space station shows how collaboration among nations can further exploration and diplomatic ties, it also demonstrates how fragile such partnerships can be. Russia had threatened to pull out of the agreement, though it took no concrete steps to do so and its tough rhetoric was considered bluster by the United States. Still, NASA has been planning on how it would go it alone, looking to the private sector to build commercial stations that would replace the ISS.

Meanwhile, China is building a station of its own and preparing to send humans to the moon as well. Its progress in recent years has made it a true rival to the United States in space, and yet it has not agreed to any of the standards laid out in the accords.

That could lead to an awkward -- and tense -- scenario if the United States and China find themselves as next-door neighbors at the south pole of the moon. It is already a barren and forbidding location, but could be made more cold by frosty relations.