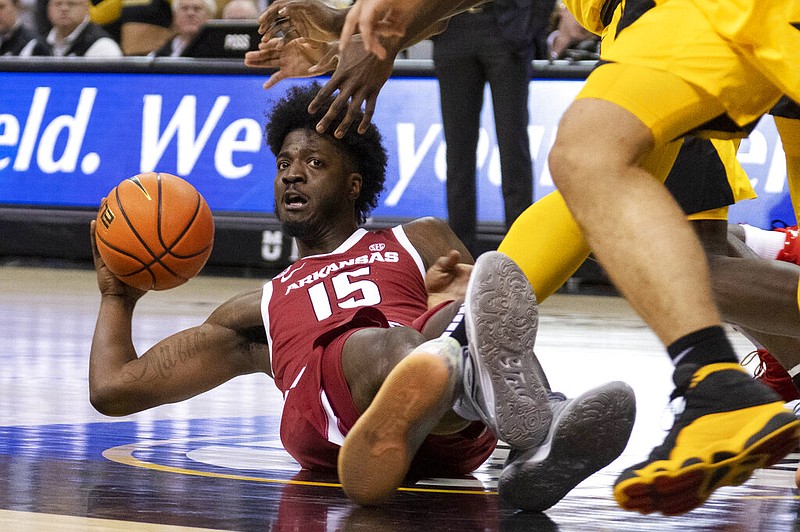 Arkansas' Makhi Mitchell, passes the ball during the first half of an NCAA college basketball game against Missouri Wednesday, Jan. 18, 2023, in Columbia, Mo. (AP Photo/L.G. Patterson)

The University of Arkansas men's basketball team is still winless on the road.

Missouri rallied from a 10-point deficit in the second half to beat the No. 25 Razorbacks 79-76 on Wednesday night at Mizzou Arena in Columbia, Mo.

After Missouri took a 79-76 lead on two free throws by Sean East with 2.8 seconds left, Razorbacks freshman guard Anthony Black -- guarded by Deandre Gholston -- missed a desperation three-point attempt from about 30 feet that fell short of the basket.

"I thought our competitive nature tonight was at a high level," Razorbacks Coach Eric Musselman said. "We're just a basketball team that has not figured out how to win down the stretch."

Black had 15 points, 8 rebounds and 7 assists along with 5 turnovers.

Junior guard Ricky Council had 13 points, 3 rebounds, 3 assists and 3 turnovers for the Razorbacks.

Arkansas freshman forward Jordan Walsh had 12 points in 13 minutes off the bench before fouling out with 6:48 left.

Brown, Sean East and D'Moi Hodge combined to go 8 of 8 in the final 29.6 seconds to help Missouri hold on to win.

Arkansas was called for 33 fouls and Davis and senior forwards Makhi Mitchell and Kamani Johnson joined Walsh in fouling out.

"I just have never coached in a game where four players fouled out," Musselman said.

Missouri was called for 23 fouls -- 10 fewer than Arkansas.

"I give Missouri credit," Musselman said, declining to comment on the foul differential. "They beat us."

Turnovers also helped beat the Razorbacks. They had a season-high 21 turnovers -- including 14 in the first half -- to 12 for Missouri.

The Tigers finished with a 31-13 advantage in points off turnovers.

"We had 11 turnovers at the point guard spot and their team had 12,," Musselman said in reference to Davis and Black on Arkansas' postgame radio show. "So that's a big key to the game."

Missouri tied it 71-71 on a basket by Gholston.

Davis then was called for charging with 43.7 seconds remaining and fouled out.

Jalen Graham -- who came into the game when Johnson fouled out -- had a turnover and East hit two free throws to extend the Tigers' lead to 75-71 with 14.4 seconds left.

Black scored on a drive with 8.6 seconds left and Noah Honor hit two free throws for Missouri to make it 77-73 with 7.8 seconds left.

"We got up by getting stops," Black said of the Razorbacks building their lead to 10 points. "On offense, I think we were playing with a lot of confidence.

"It was just [not] getting stops and being smart with the ball. Down the stretch, we fouled a lot. We gave up a couple big threes. Momentum shifters.

"And we turned the ball over. A lot of that is on me. As the point guard and the game manager with a few minutes and we're up 10, we're supposed to win the game.

"I take the responsibility for what happened down the stretch."

Arkansas' only SEC victory was over Missouri 74-68 at Walton Arena on Jan. 4.

The Tigers broke a five-game losing streak against the Razorbacks.

Prior to Wednesday night, Missouri's last victory over Arkansas had been 81-68 in Walton Arena in 2021.

Arkansas dropped to 33-27 all-time against Missouri, including 14-9 in SEC matchups.

Missouri improved to 11-1 at home. The Tigers' only loss in Mizzou Arena was to No. 2 Kansas.

KEY STAT The Tigers outscored the Razorbacks 31-13 in points off turnovers.