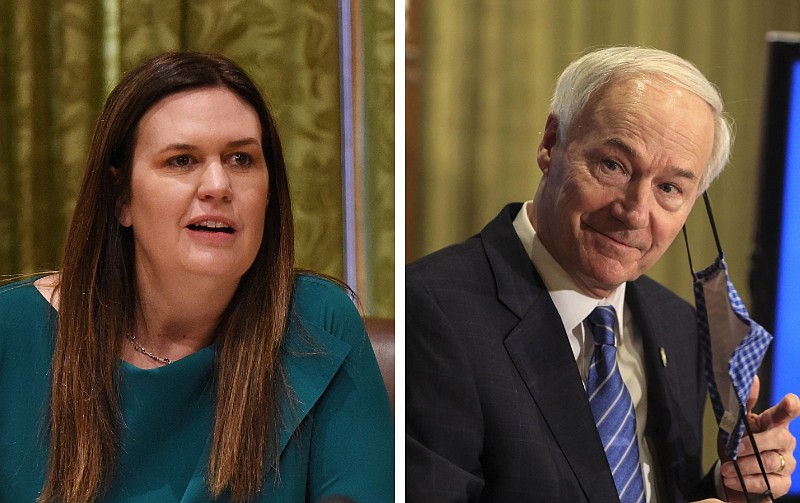 Gov. Sarah Huckabee Sanders announced Wednesday her official support for the constitutionality of a state ban on mask mandates, reversing a stance held by her predecessor former Gov. Asa Hutchinson in an extended legal battle.

"I promised that when I was elected, Arkansas would not have mask or covid-19 vaccine mandates and we would not shut down churches and schools because we believe in personal freedom and responsibility," Sanders said in a news release. "Arkansans need to talk with their medical professionals, with their doctors, and make the decisions that are best for their family and their kids."

The Republican governor said she had asked Arkansas Attorney General Tim Griffin to represent her office in a lawsuit over the constitutionality of a state ban on mask mandates by public entities. Sanders' announcement marks an about-face from the stance taken by Hutchinson, who hired his own attorney and joined a lawsuit brought by school and county officials against the ban on face-covering requirements passed by the General Assembly in 2021.

While Hutchinson, also a Republican, signed Act 1002 of 2021 into law, he later said he regretted his decision and pointed to how the act could restrict his constitutional authority as commander-in-chief of the Arkansas National Guard and limit the ability of school districts to protect students and staff.

Hutchinson was not immediately available for comment through a spokesperson Wednesday afternoon.

A Pulaski County circuit judge ruled the state ban was unconstitutional in December of 2021. Early last year, then-Attorney General Leslie Rutledge filed a notice to appeal the ruling before the Arkansas Supreme Court.

Griffin acknowledged Sanders' request for representation in the news release and said "we look forward to the Arkansas Supreme Court's decision in the coming weeks."

"I welcome this development and believe it is consistent with the proper Constitutional authority of the legislative branch," Republican House Speaker Matthew Shepherd of El Dorado said in the news release.

"The General Assembly adopted, and the previous Governor rightly signed, this legislation into law to safeguard our citizens from overreach and heavy-handed mask mandates," Hester said in the release. "Protecting Arkansans and defending their freedoms is a top priority that we share with Governor Sanders. It is time that Arkansas gets back to normal."

Act 1002 bars state and local governments, including school districts, from requiring individuals to wear masks. The law makes exceptions for prisons, juvenile detention centers and state health care facilities and does not include private businesses.

After the act passed in April 2021, a group of parents, educators and Pulaski County officials sued to overturn the law, saying it discriminated against public school students, usurped judicial power and infringed on the governor's authority.

Enforcement of the law was halted in August of that year when Pulaski County Circuit Judge Tim Fox issued an injunction pending the resolution of the lawsuit.

Following a trial a few months later, Fox ruled the state ban on mask mandates violated the separation of power clause by attempting to seize the constitutional authority of county judges and the Arkansas Supreme Court. The act also violated equal protection provisions of the state Constitution by discriminating between minors in public and private schools, according to Fox's ruling.

Leaders of several state and local agencies testified in favor of permitting mask mandates, including Pulaski County Sheriff Eric Higgins and Solomon Graves, then secretary of the Arkansas Department of Corrections.

Dr. Jose Romero, who was serving as the state's secretary of health at the time of the trial, testified that state data showed there was a 20% reduction in infection in schools where masks were worn by adults and children compared to schools where face coverings were not worn. During testimony, he said there was "no doubt" that preventing schools from requiring masks put children at excessive risk.

When asked if Sanders was concerned about limiting the ability of school districts to mandate masks, spokeswoman Alexa Henning said in an email statement, "No, the Governor promised that when she was elected, Arkansas would not have mask or covid-19 vaccine mandates and would not shut down churches and schools because she believes in personal freedom and responsibility."

Henning provided the same response when asked if Sanders was concerned about the ban on mask requirements preventing state agencies from carrying out their duties. Henning also said the administration did not foresee a situation where the state ban on mask mandates would restrict Sanders' authority as commander in chief of the Arkansas National Guard.

There were 4,744 active cases of the coronavirus in Arkansas on Tuesday, down by 157 cases from the day before, according to data from the state Department of Health.

State officials reported Wednesday that 289 patients were hospitalized with covid. In total, Arkansas had seen 992,745 cases and 12,766 deaths attributed to the virus.

Sanders' announcement supporting government bans on mask mandates came as Republican Gov. Ron DeSantis of Florida worked to shore up his state's ban on face-covering and vaccine requirements. DeSantis urged Florida lawmakers on Tuesday to make these measures permanent, saying the bans were a "prescription for freedom."

Sanders has repeatedly called for a return to pre-pandemic norms. On Friday, she signed an executive order disbanding five government covid-19 groups and committees established under Hutchinson's administration.

Information for this article was contributed by the Orlando Sentinel and John Lynch and Stephen Simpson of the Arkansas Democrat-Gazette.