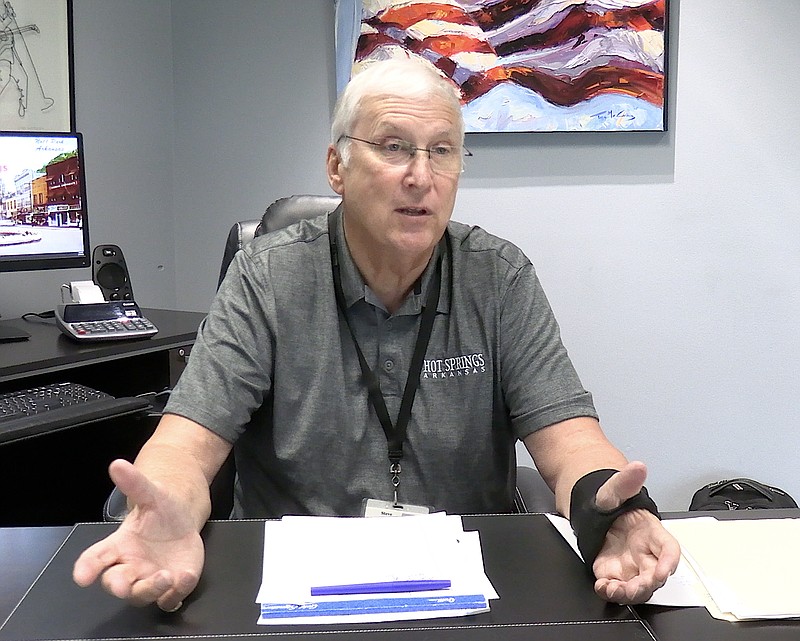 USA Bass is part of USAngling, a charitable organization that supports the USA Bass Team that competes in Pan-American and World Championship fishing events.

"Charlie Evans, who is the (former) president of FLW, has done a lot of things for fishing over the years," Visit Hot Springs CEO Steve Arrison said. "He is a good friend of ours and he was a captain of the USA fishing team which has won the worlds most recently. He approached us before COVID. That's how long this has been in the works."

"We had scheduled the Pan-American Championships which will bring in all those Pan-American countries to fish against the United States," Arrison said. "The World Championships, which are three years later, we were supposed to already have. With COVID everything was sort of pushed back. Evans got us involved and we thought it was a great thing. Let's make Lake Hamilton a worlds fishery."

"What they are doing is they are trying to add a sport to the Olympics," Arrison said. "They formed this to add bass fishing to the Olympics. You must have so many international events to present to the International Olympic Committee to get a sport added. We are helping them get bass fishing added as an Olympic sport where you can get a gold medal."

Competitors are selected by committee to join Team USA based on their rank.

Hot Springs local and Major League Fishing angler Stephen Browning is one who was selected for the Pan-American this year.

"MLF Supports this," Arrison said. "All the bass leagues support this because it is for the good of bass fishing. MLF provided the stage and some of the people who helped them put on the worlds late last year."

"Everyone is here to help fishing and that is what we are doing," Arrison said. "At the same time drawing a lot of attention to our lake. It is going to be a world Championship lake. Everybody who is anybody in fishing will be here trying to win the world championship."

"They get medals for winning," Arrison said. "They get really nice medals and trophy cups. I have never seen so much hardware. They do not get money. You are fishing for your country and as a spectator that is what was so cool. For me to watch it, you are rooting for USA. The crowd really got into it. I know how our crowds are here. Hopefully we will have a good turnout."

Arrison went to the 2022 World Championship in South Carolina.

"Next year is Italy and the next they are in South America," he said. "When it comes back to the United States it will be in Hot Springs, Arkansas, on Lake Hamilton in 2026. We are really excited about that."

The weigh-in system used for the 2022 World Championship in South Carolina was on stage with a scale and not an on-boat tracking system used by MLF and other entities.

"For the Pan-American, the weigh-ins will be held at the lake," Arrison said. "For the World Championships we will be doing it at Bank OZK Arena. The worlds will be inside and the Pan-American this year will be outside at the fish hatchery. We will have a stage set up."

"Mexico, Germany and Croatia, all of these countries and all these bass fishermen," Arrison said. "They were all fishing for bass and USA won it, which was real exciting."

The Andrew H. Hulsey State Fish Hatchery in Hot Springs will not stock the lake for the tournaments.

"We have a close relationship with the fish hatchery," Arrison said. "I am sure that is where the takeoffs will be. We do not stock. Lake Hamilton is a fishery in its own right and hopefully they will catch a lot of fish this year and for the worlds later on."

"We have always tried to do one big tournament per year," Arrison said. "I have been here 25 years and every year we have tried to host a large tournament. We have been very successful. We have had B.A.S.S. events here. I think we hold the record for the FWC that was held here. We are a great fishing community and we have great lakes. The citizens love fishing and they come out for it."

Scott Martin from Florida and James Watson from Missouri are also confirmed on Team USA for the Pan-American Championship.

"Some of the best fishermen and the best fisherman in the world will be right here," Arrison said. "Including the American team, which I think that everybody will know who they are when they get here."

Local tourism will have a boom when fishermen from so many countries flock to Hot Springs.

There will be an event to introduce the teams on Bridge Street.

"I think it will be great and it is on Lake Hamilton in September," Arrison said. "So the summer rush is over. The Pan-American we will have 15 to 20 countries for that. We will need a lot of local help. If you are coming from Germany, you are not bringing boats with you. We will be looking for boats and boat captains. USA Bass will take care of all of that."

The teams will be fishing for largemouth, smallmouth and spotted bass.

"It is just going to be a really interesting event and it is right here in the middle of town," Arrison said. "This puts us on their website and their TV show. It puts Hot Springs on anything to do with USA Bass, which is not a bad thing for us. As good as bass fishing has been to Hot Springs, we need the help and we are helping. It is just going to be a big celebration."