A preview of 2023 Sundance Film Festival 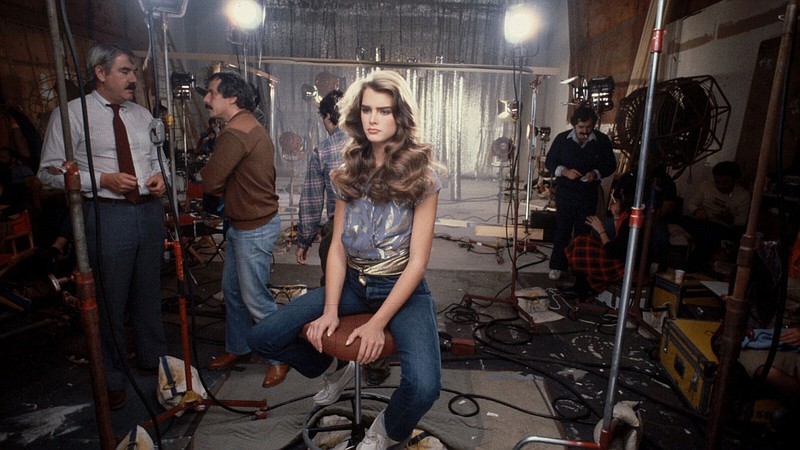 “A bright spark might corner the market”: Brooke Shields is at the epitome of her “this year’s girl”-ishness in a scene from Lana Wilson’s two-part documentary “Pretty Baby: Brooke Shields.”

In the before-times, when you could happily go away for a week to a distant, high-altitude city for a film festival and immerse yourself in the place -- the theaters, shuttles, cafes and bars (and shared rented condos) -- without worrying about the many, many billions of germs floating through the atmosphere in such tightly constricted spaces, planning ahead for such an event was a logistical jam, but a physical joy.

Now, of course, we don't get to be so freewheeling about such excursions, especially if we're immunocompromised. Last year, the powers-that-be determined Sundance would be an entirely virtual affair, so we were all stuck in the same boat. This year, with covid-19 in one sort of regression or other, it was reinstated as an in-person event, as well as a virtual one. Logistically, of course, it's much easier to watch these films from the comfort of your own couch, but I can't say I won't miss the mountains, and the cold, and trudging through the snow, running into friends and comrades along the way and experiencing Sundance as God intended -- cold, and frazzled, and besotted with cinema.

Still, the movies endure, even if the experience is a good deal less dramatic. Here are 10 films we are most excited to check out for the ten days of the 2023 edition.

"Bad Behaviour": Generally, Sundance isn't the festival where you're going to see pantheon A-list stars plying their glamorous trade (for that, there's Cannes, Berlin, Venice, TIFF, et al.), but that's not to say the fest's films are totally devoid of recognizable star talent. Alice Englert's film features stars Jennifer Connelly and Ben Whishaw, a pair of brilliant actors often not given their due, in what sounds like a jet-black comedy about a former child star (Connelly) visiting a mountain resort to spend time with her mentor/guru (Whishaw), while leaving the rest of the world (including her own daughter) behind. The film is Englert's feature debut, but if she was able to conjure that pair of sterling leads on board, she has to be doing something right.

"Cat Person": Perhaps the most viral short story of the 21st century, Kristen Roupenian's scathing modern relationship commentary became a sensation after being published in The New Yorker, back in 2017. The film, which stars Emilia Jones as a college student who meets an older man (Nicholas Braun), at the cinema she works in, and embarks upon a herky-jerk sort of romance in the digital age that goes well off the rails, sounds as if it adheres pretty closely to the text, so we can likely expect much in the way of cringing and wincing along the way.

"Eileen": Yet another literary adaptation in a festival rife with them, William Oldroyd's film, based on the celebrated novel by Ottessa Moshfegh, follows the curious path of the titular young woman (Thomasin McKenzie) who spends her days working at a prison, where she is routinely ignored by the rest of the staff. Things rapidly begin to change, however, when a new woman (Anne Hathaway) begins working there, leading Eileen to make a potentially life-changing decision, and not in a good way.

"Fairyland": We all have certain actors we favor, and try to watch whatever they appear in. For me, the greatly underrated Scoot McNairy is solidly on the list. In Andrew Durham's debut feature, McNairy plays a widowed father to an adolescent daughter (Emilia Jones), who moves them up to San Francisco, where he explores an alternative lifestyle, and largely leaves his daughter to figure it out for herself. Do I even need to mention this takes place in the '70s? Based on the memoir from Alysia Abbott, it sounds as if it might make a perfect companion piece to 2015's similarly situated "Diary of a Teenage Girl." Scoot, forever!

"Infinity Pool": You can't very well have a Sundance without a good freakout or two. Brandon Cronenberg's follow-up to the excellent "Possessor" is another dark, anti-wealthy screed (perhaps covid exposed the wealth gap even more than usual) about a well-to-do couple (Alexander Skarsgard and Mia Goth) who go to an all-inclusive island getaway and inadvertently commit a murder. Will they have to confess and pay for their crimes? Have you learned nothing about the super-wealthy?

"Magazine Dreams": In the official Year of Jonathan Majors -- the accomplished actor will appear in both an MCU blockbuster ("Antman and the Wasp: Quantumania"), next month, and the closing film of the "Creed" trilogy this summer -- he also found time to make this much smaller indie character study from Elijah Bynum, about a volatile, obsessive body-builder who has to negotiate the world outside his gym, much as he might not want to.

"Pretty Baby: Brooke Shields": Anyone under the age of 40 might not know much about her, but to those of us around in the '70s and '80s, Shields was a controversial "it" girl, from a very early age. A model and actress as a child, she was quickly sexualized (including an infamous TV ad for Calvin Klein when she was only 15). Lana Wilson's two-part doc explores the career of Shields, through the prism of a modern, feminist lens, evaluating the ways in which female exploitation reverberated through pop culture, and threw Shields into a world she never made.

"Sometimes I Think About Dying": Ah, the quintessential-sounding Sundance drama: A young, isolated woman (Daisy Ridley) spends her days stuck in a cubicle, secreted away from virtually anybody else. That is, until the arrival of a new employee, a warm-hearted man who's friendly to everyone, threatens to break her out of her self-imposed exile and into the outside world.

"When It Melts": A dramatic examination of trauma, stretched over time, Veerle Baetens' film concerns a fragile woman named Eva (Charlotte De Bruyne), now living very much alone, who considers her past, as an adolescent, when she befriended a pair of older boys and experienced something dreadful as a result. Now grown and embittered, Eva returns to her hometown to try to make sense of what she had to endure as a child. Sounds properly searing.

"You Hurt My Feelings": Writer/Director Nicole Holofcener has made a long career exploring the intricate dynamics of interpersonal relationships in thoughtful and insightful ways. Her latest film reunites her with Julia Louis-Dreyfus (who was in the excellent "Enough Said"), who plays a writer struggling to follow up a successful early book, and running into problems, exacerbated greatly when she overhears her husband tell someone else that he doesn't like her latest attempts. Expect plenty of marital angst, rendered in precise, witty dialogue exchanges. Sign us up!