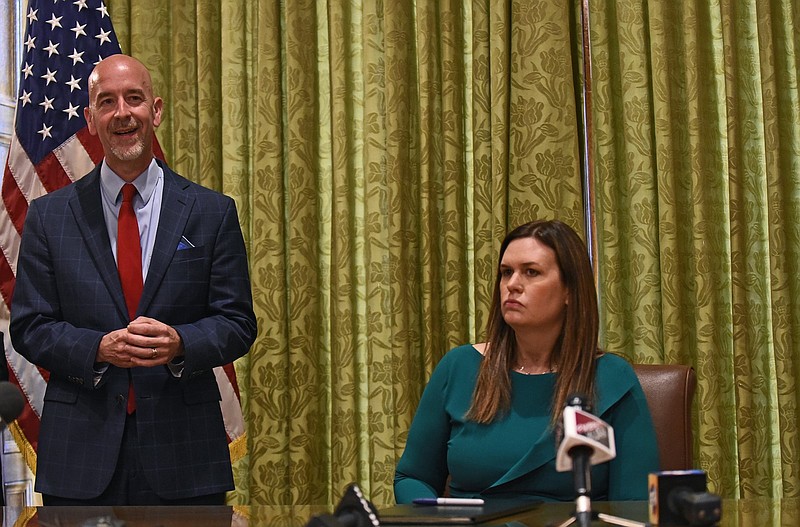 "Today, I signed an executive order that will streamline applications & create a unified system for local school districts to apply for federal and state funding," Sanders said in a tweet. "No longer will we let a burdensome, fragmented, & inefficient government system full of red tape hold our kids back."

Before the unified application is launched, however, the order calls for the Arkansas secretary of education to "conduct a review to identify out-of-date, unnecessary, or otherwise burdensome state laws, regulations, reporting requirements, and processes," and to recommend changes to reduce bureaucracy.

The state's education secretary also has been tasked with creating a system whereby school districts can submit feedback to the state Department of Education on what "overburdensome and redundant" state laws and regulations should be changed.

"The governor's executive order outlines the timeline for implementation of the unified application system, as well as the steps involved in its development," Kimberly Mundell, a spokeswoman for the Department of Education, said in an email. "The process for developing the application will be comprehensive and will involve a thorough review of existing processes and feedback from stakeholders. More details will be available in the future."

Since July, a panel of lawmakers has reviewed and approved plans from school districts on how they plan to spend $500 million in federal stimulus from the Elementary and Secondary Schools Emergency Relief Fund, also known as ESSR.

Since 2021, school districts have applied for federal funding from the Arkansas Department of Education that can be used to cover things ranging from purchasing new buses to supplemental literacy programs. As part of the American Rescue Plan Act, Arkansas received $1.2 billion for education, meant to target pandemic-induced learning loss.

The Legislative Council reclaimed $500 million from the Department of Education in July to push school districts to use the federal funds for teacher retention bonuses, as many school districts suffered from staffing shortages.

Increasing teacher pay is an issue lawmakers are expected to take up during the session with Sanders, as well as Republicans and Democrats in the General Assembly, saying they support increasing salaries for educators. However, Sanders said her education legislation is likely to come in one large bill that could include funding for increased teacher pay and school vouchers, something Democrats said they won't support.

Since taking office, Sanders has signed three executive orders related to education. The first bans what Sanders called "indoctrination" and critical race theory. The second was aimed at laying the groundwork for her plan to rework the state's education system.

The Republican governor has promised to overhaul education in the state, saying she supports school vouchers, increasing teacher pay, funding for rural broadband internet and increased security at schools.

"I ask you to send me legislation that expands pre-K, improves literacy, and gives students real-world skills they need to succeed in the workplace," Sanders said previously in an address to a joint session of the General Assembly.

Sanders also promised to clear up red tape in other parts of government, signing an executive order Jan. 10, her first day in office, that directs the inspector general "to conduct a complete and exhaustive review of all previously issued Executive Orders."