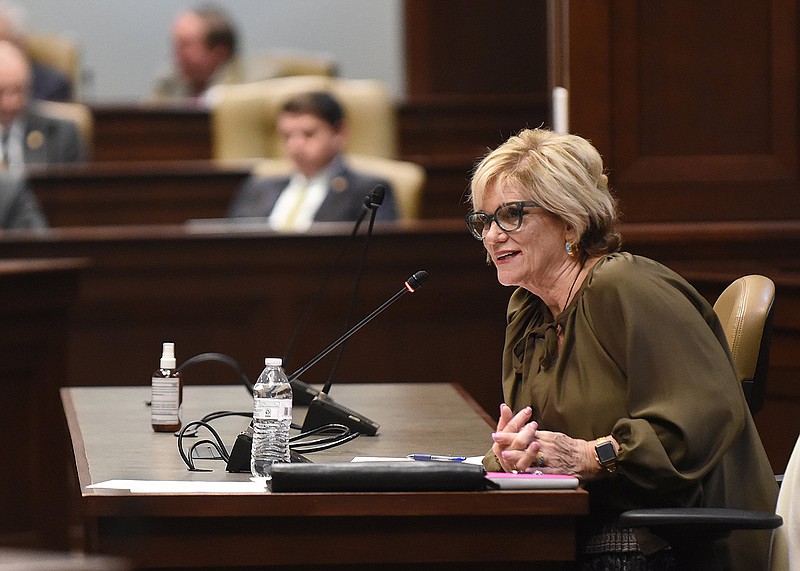 A legislative personnel subcommittee on Thursday approved salary increases for heads of state agencies and granted a request for new pay classifications for five members of the governor's staff.

None of the salary increases approved by the personnel subcommittee of the Joint Budget Committee would require funding beyond authorized appropriations, said Kay Barnhill, state personnel director.

The panel approved salaries for four department secretaries that exceeded the maximum salary of $201,700 set for those positions. State law permits the governor's office to pay agency directors up to 50% more than the maximum pay level after receiving the approval of the Joint Budget Committee.

Republican Gov. Sarah Huckabee Sanders' office requested a salary of $225,000 for Kristi Putnam, secretary of the Department of Human Services. The requested amount is $23,300 more than the annual salary of former Secretary Mark White, who served under former Gov. Asa Hutchinson, also a Republican. Cindy Gillespie, who served as secretary under Hutchinson until October, had a salary of $287,042, according to the state's transparency website.

Subcommittee members endorsed a salary of $250,000 for Jacob Oliva, head of the Arkansas Department of Education. State records show Oliva's predecessor, Johnny Key, had a salary of $239,361.

For Hugh McDonald, secretary of the state Department of Commerce, subcommittee members approved a salary of $225,000. Mike Preston, former head of the department, had an annual salary of $168,047.

Barnhill noted Preston received a roughly $50,000-a-year bonus because he also served as the director of the Arkansas Economic Development Commission. McDonald will not hold the director position, Barnhill said.

The subcommittee approved a salary of $210,000 for Joe Profiri, secretary of the state Department of Corrections. Solomon Graves, who held the position under Hutchinson, received a salary of $170,276, according to the state's transparency website.

The secretary salaries requested by Sanders' office were competitive with salaries paid in neighboring states, according to Barnhill.

"I don't have the specific dollars in front of me, but traditionally we've been lower with most of these positions than our surrounding states," she said.

Barnhill pointed to a study conducted by the state Office of Personnel Management which found that several state positions were running at least 20% under the market for similar jobs.

"This is basically a Band-Aid approach and the only way we had of doing this business at this point in time," Barnhill said.

Gretchen Conger, Sanders' chief of staff, was listed as having a salary of $147,200 in a report provided by the state Department of Transformation and Shared Services last week.

Andrew Ritchie, Sanders' chief legal counsel, was listed as having a salary of $140,592. Jordan Powell, the governor's public affairs director, had a salary listed as $112,900. Judd Deere and Kelly Eichler, Sanders' deputy chiefs of staff, had salaries listed as $125,986, according to the report from the Department of Transformation and Shared Services.

Sen. Kim Hammer, R-Benton, asked if Sanders intended to "do more with less" by giving up the five positions.

The approval of all actions was retroactively dated to Jan. 11. The recommendations will have to receive the approval of the full Joint Budget Committee before they can go into effect. 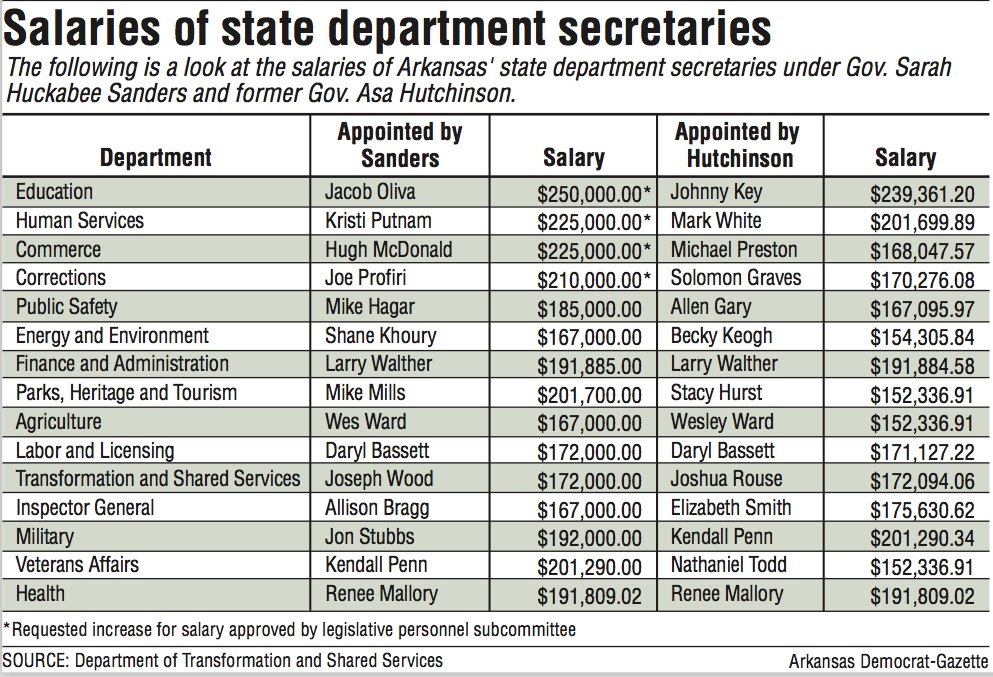