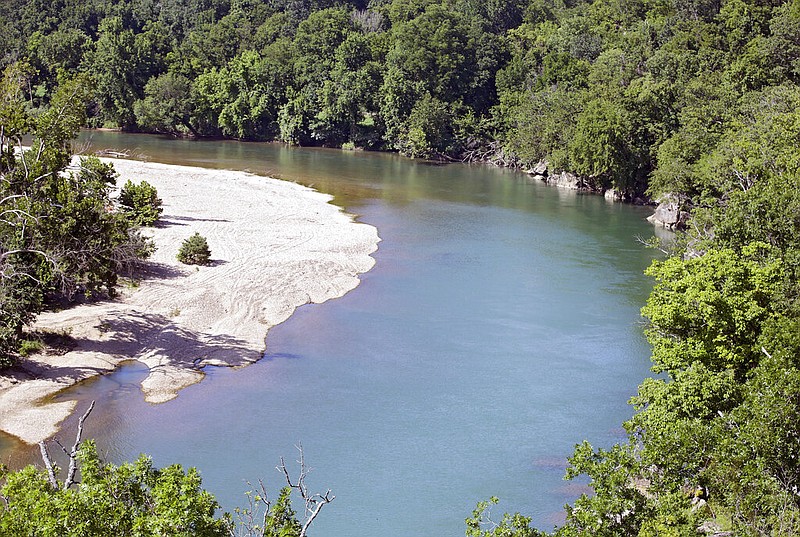 The Illinois River is seen from Goat's Bluff at the J.T. Nickel Family Nature and Wildlife Preserve in this July 18, 2019 file photo. A federal judge on Wednesday, Jan. 18, 2023 ruled that Arkansas-based Tyson Foods, Minnesota-based Cargill Inc. and others are responsible for pollution of the Illinois River Watershed by disposing of chicken litter that leached into the river. (Mike Simons/Tulsa World via AP)

Oklahoma won its lawsuit against Arkansas poultry producers over pollution of the Illinois River, which runs between the two states, according to a recent court ruling.

Arkansas poultry companies violated trespassing and public nuisance-related laws in Oklahoma by letting their contract poultry growers dispose of chicken and turkey litter by applying it as fertilizer within the Illinois River watershed, the judge ruled.

Phosphorus is the pollutant that makes poultry litter especially harmful to the Illinois River because it is a key food for algae, which destroys water clarity and drains dissolved oxygen from water, Edmondson argued at trial.

The river and its tributaries begin in Benton and Washington counties and run 145 miles, passing through northeast Oklahoma before entering the Arkansas River. The Oklahoma Legislature designated the Illinois as a scenic river in 1977.

"The parties are hereby directed to meet and attempt to reach an agreement with regard to remedies to be imposed in this action," the ruling concludes. "On or before March 17, 2023, they shall advise the court whether they have been able to do so. The agreed remedies, if any, must by approved by the court. In the event the parties are unable to reach an accord, the court shall enter judgement."

The case involves 11 named defendants including Tyson Foods Inc., Cargill Inc. and others.

"We are aware of the decision and are reviewing," Tyson Foods spokesman Derek Burleson said Thursday. "We have no comment at this time."

Relief sought in the lawsuit includes curtailing runoff from litter. The relief could include restrictions on how much litter is used and how it can be applied in the watershed. Recommendations made by expert witnesses in the trial include removing all poultry litter outside the watershed, buffer strips to control runoff, excavation of phosphorous-laden soil, applying alum to fields to bind phosphorous there, stream bank stabilization and constructing wetlands. Frizzell ruled out monetary damages as the trial began in 2009.

The most conservative estimate given in the trial of the amount of chicken litter produced by the defendants' operations was 354,000 tons a year. Litter consists of waste and the wood shavings or rice hulls spread on the floors of chicken houses to absorb that waste. There are approximately 1,900 active poultry houses in the watershed, according to the ruling.

"As late as the 1960s, its waters were crystal clear," the ruling says of the Illinois River. "But that is no longer the case. The river is polluted with phosphorus, with adverse consequences that include low dissolved oxygen; abundant filamentous green algae; blue-green algae in Lake Tenkiller near the river's terminus; greatly decreased transparency; and significant detrimental impacts on the numbers and species of fish."

Lake Tenkiller is a reservoir created when the U.S. Army Corps of Engineers finished a dam on the Illinois in 1952. Eighteen utilities in Oklahoma draw their drinking water from the Illinois River or Lake Tenkiller, according to the ruling.

Oklahoma "has established that hundreds of thousands of tons of poultry litter generated by defendants' chickens and turkeys are spread onto the lands of the Illinois River Watershed each year," the ruling continues. Oklahoma established that a significant cause of the excess phosphorus in the watershed is the land application of litter from defendants' poultry, according to the ruling.

"This is a great and historic day for Oklahoma," Drummond said. "While this decision has been a long time coming, it is important to note that in the intervening years since the filing of the suit, the poultry industry has made, or is willing to make, strong improvements in waste disposal to ameliorate the extent of the problem. Oklahoma has amazing natural resources that deserve our vigilant protection. We will thoroughly review the judge's decision and determine the appropriate path forward."

Drummond is the fifth attorney general for Oklahoma to serve, including Edmondson, since Edmondson filed the suit.

The ruling recognizes other sources of phosphorus besides poultry litter pollute the river. Cattle, for instance, dump an estimated 3,136 tons of phosphorous a year into the river's watershed through their waste compared to 2,398 tons a year by poultry at the time of the trial, according to expert testimony in the trial and cited by the ruling.

However, this does not mean the poultry companies are not responsible for their share of the pollutant, the ruling states. Also, Oklahoma argued at trial the cattle waste, or at least a degree of it, is in effect "recycled" phosphorous from poultry litter because cattle graze in pastures fertilized by litter.

Phosphorous in the river from "point sources" such as city wastewater treatment plants amounts to less than 20% of the phosphorous being released thanks to successful efforts by cities in the watershed to reduce the levels of the pollutants they release, the judge noted in his ruling. For instance, Springdale averaged 8.4 milligrams of phosphorus per liter of water it released in 2001 and is down to less than 0.1 per liter now, according to the utility. Other treatment plants in Arkansas and Oklahoma releasing water into the river and its tributaries report similar improvement, the ruling says.

The suit also mentions soil erosion as a contributor to phosphorous levels.

Oklahoma and Arkansas are conducting public meetings on the river's management plan, with one scheduled for Tuesday in West Siloam Springs. Efforts at removing chicken litter from the watershed and curtailing other sources led to a steady drop in phosphorus levels over the years, but progress has plateaued largely because of erosion, Tate Wentz, water quality section manager for the Arkansas Natural Resources Division, said at the last such public meeting in October.

Expert witnesses testified at trial that 20% of the fish species in the river had died off in recent years, while the number of fish belonging to carnivorous species had been reduced by 70% because of changes in the river, the ruling summarizes.

The ruling also notes Arkansas poultry companies made efforts to reduce phosphorus runoff, but it said those mitigation steps did not change the court's conclusion. Significant damage was done and continues to be done, it says.

Poultry companies also give no effective oversight of their contract growers' disposal of litter, the court ruled.

"Historically, defendants have done little -- if anything -- to provide for or ensure appropriate handling or management of the poultry waste generated by their birds at their growers' houses," the ruling says. "The evidence adduced at trial establishes that none of the defendants took any steps to do so."

The Arkansas Legislature passed the Arkansas Soil Nutrient Application and Poultry Litter Utilization Act in 2003. However, as amended in 2005, the act didn't take full effect until after Jan. 1, 2007.

"Thus, it was not until Jan. 2, 2007, that poultry growers were required by Arkansas law to comply with nutrient management plans," Wednesday's ruling says.

Enforcement of those plans is left to the state with little or no effort by poultry companies to ensure their growers comply, the ruling says.

Wednesday's ruling covers a wide range of complex topics including geology, history and the chemistry of various types of phosphorous, but does not address why releasing the ruling took so long. 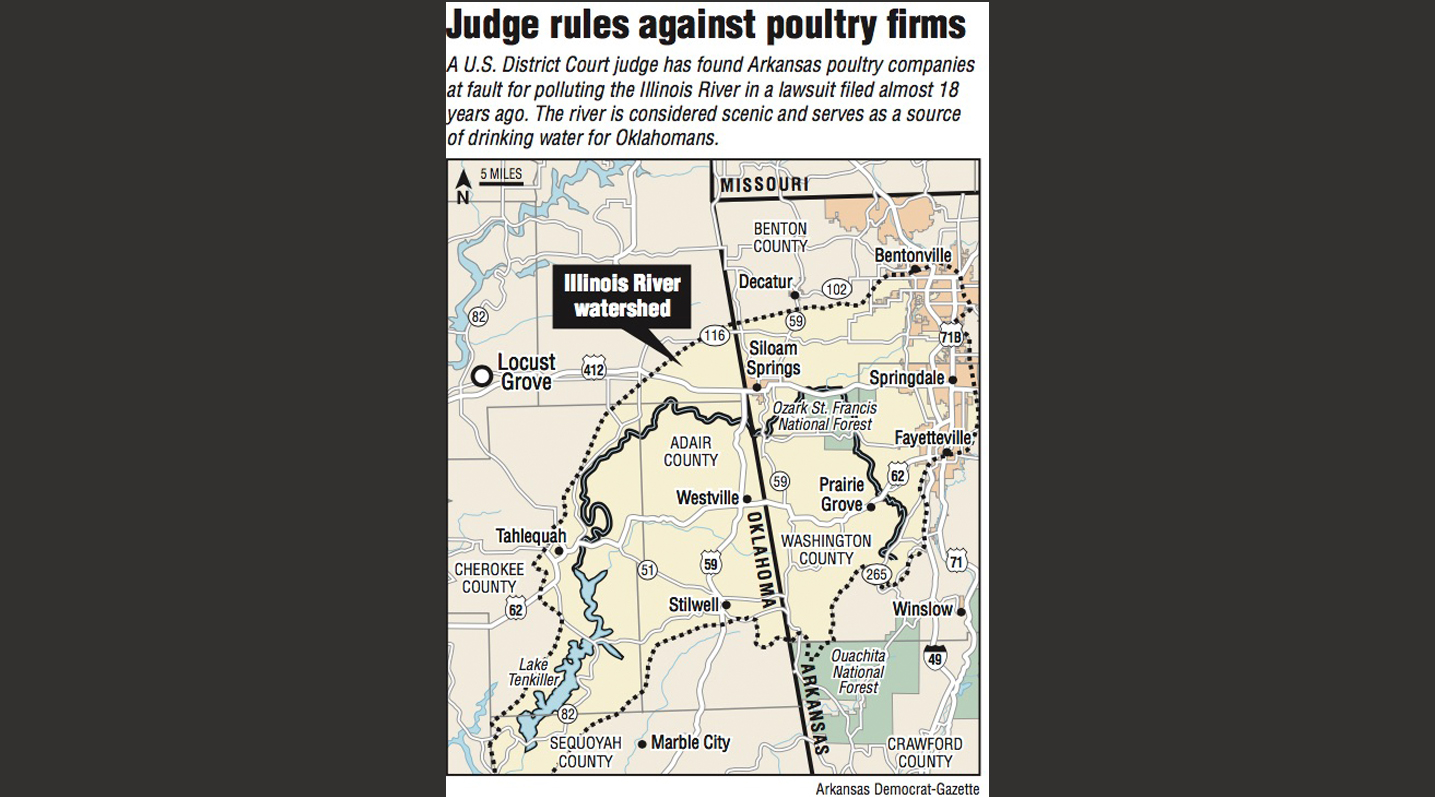