Barnett testifies in his trial, says stun gun inoperable after dropped in shower 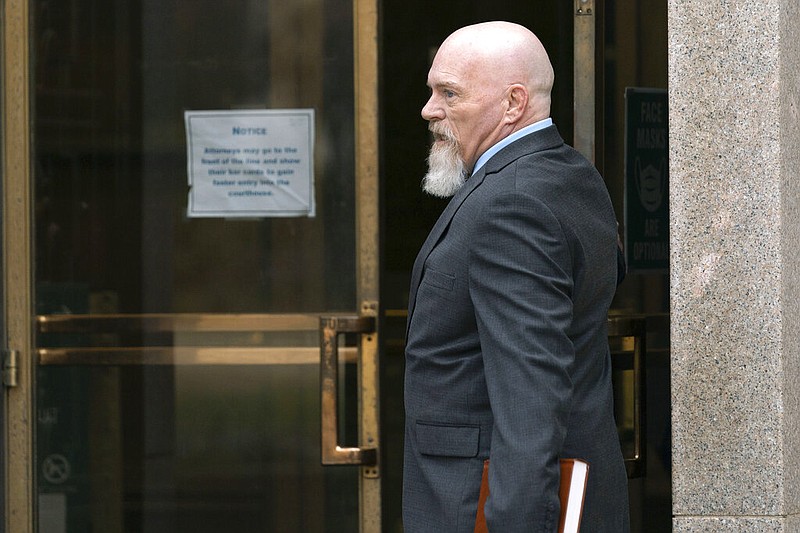 Richard "Bigo" Barnett arrives for his trial at the federal courthouse in Washington on Tuesday, Jan. 10, 2023. Barnett was photographed with his feet up on a desk in then-House Speaker Nancy Pelosi's office during the Jan. 6 riot at the Capitol. (AP/Jose Luis Magana)

WASHINGTON -- Richard "Bigo" Barnett testified Thursday that the Hike 'n Strike Walking Staff stun gun that he took into the U.S. Capitol on Jan. 6, 2021, wasn't operable, possibly because he had dropped it in his hotel shower the night before.

Barnett said he returned to his hotel after a night of drinking, turned on the shower, started "stripping down," and dropped the Hike 'n Strike in the shower.

"After I got it wet, I dried it off but it didn't work," said Barnett.

Barnett said he thought perhaps the batteries were dead since he had "played with" the device since buying it a week earlier at the Bass Pro Shop in Rogers, but he didn't have time to buy batteries before heading to The Ellipse, where a Stop the Steal rally was to take place on Jan. 6, 2021.

Barnett, 62, of Gravette, faces eight charges in connection with the Capitol riot. He faces enhanced charges alleging that he entered the Capitol with a dangerous weapon -- the stun gun.

Barnett got worldwide attention after posing for photographs with his foot on a desk in House Speaker Nancy Pelosi's office suite.

Closing arguments are expected after Barnett's testimony. The trial began Jan. 9. The government put on 12 witnesses, including five from Arkansas. The defense has put four witnesses on the stand.

The trial resumed on Thursday with some procedural matters before the jury was brought into the courtroom.

Bradford L. Geyer, one of Barnett's attorneys, moved for a mistrial, saying the government's demonstration of the Hike 'n Strike in the courtroom on Wednesday "horrified" and "terrified" the jurors when the device clicked loudly and emitted a bright, flashing light from its spike electrodes.

Testimony began Thursday with Eileen Halpin of Huntsville, who said she is friends with Barnett and his wife Tammy Newburn. (They're not legally married, but Barnett said they're "married in God's eyes.")

Assistant U.S. Attorney Michael Gordon played a video from the Capitol in which Barnett could be seen confronting Metropolitan Police officer Terrence Craig in the Rotunda because he had left his American flag and 10-pound steel pipe in Pelosi's office and he wanted an officer to get it for him.

Halpin said she hadn't seen the video before.

"He gets a little obsessive-compulsive over things like that, and I would not be totally surprised that he would act in that way to get his flag," she said.

"Having seen that video, has it changed your opinion of the defendant?" asked Gordon.

"No, it doesn't change my opinion of him because I know him," said Halpin. "I mean, this is not all who he is."

Geyer asked Halpin if Barnett's reputation in the community is still "rock solid."

"One hundred percent," she said. "He's a good man ... never would he have ever intended any harm on anybody."

Newburn testified next, saying Barnett buys and sells antique cars. He has driven them in parades hauling everybody from local officials to Santa Claus, she said.

"Can you explain?" asked Geyer.

"I'll allow that one," said the judge.

"I'm not objecting to Santa Claus, for the record," said Prout.

Geyer rephrased the question, asking "how that came to pass."

"It was a small town Christmas parade," said Newburn. "They needed a vehicle for Santa Claus to ride in. And since he has a '47 Dodge cab over with a flatbed, we put a big chair up there. Santa Claus could be seen by all the little kids and wave."

An elf followed in "one of our other little speedster cars," she said.

"Was this event peaceful?" asked Geyer.

Newburn said she also played with the Hike 'n Strike that Barnett purchased.

"Just kind of playing with it out in the yard and just zapping at stuff," she said.

She said Barnett called Benton County Sheriff Shawn Holloway, who advised him to come in to his office the next morning.

So Barnett went to the sheriff's office on the morning of Jan. 8, 2021, where he was interviewed by FBI agents before being placed under arrest.

Newburn said the FBI served a search warrant at her home that same night.

Geyer noted that, in one of her text messages to Barnett, Newburn asked "Did you bring your vests?"

Newburn testified that she was referring to his tactical vest, "like bulletproof, I guess."

"I had heard and seen on the news so much about antifa, and I was afraid that they would get stabbed in the crowd," she said.

Newburn said Barnett came up with the name Bigo to use on Facebook while selling cars and car parts.

Geyer asked Newburn what happened to Barnett's phone, which he apparently used to film much of his activities on Jan. 6, 2021.

She said he may have put it on a rail on his vehicle and driven off.

He said Bigo Barnett is basically his "public appearance."

"Bigo Barnett goes out and does Back the Blue rallies, speaks out on his political issues," he said. "Just all around sometimes a loud mouth, but just all around just me being out in the public stating my political views; and adventurer, bull rider, hitchhiked all over Central America, falling off of volcanoes."

Barnett said that's not who he is at home, where he's just a dad to Newburn's two girls.

"Do you have any regrets about Jan. 6th?" asked McBride.

"Heck yeah," said Barnett. "Right off the top of my head, I regret going."

"It was not what I expected, and it wasn't worth the two years of lost life and misery for my family," said Barnett. "A lot of reasons."

Barnett said former President Donald Trump's speech at a Stop the Steal rally at The Ellipse on Jan. 6, 2021, wasn't what he expected.

Barnett said he had other regrets.

"I probably shouldn't have put my feet on the desk," he said.

He left a note behind in her office that read, "Nancy, Bigo was here, biotch."

"So if Speaker Pelosi was here today and you could apologize to her, would you say, 'I'm sorry for what I said?'" asked Joseph D. McBride, one of Barnett's attorneys.

Barnett said he grew up in Memphis. His mother died when he was 15, and his family fell apart, he said. Barnett said he was living alone at the age of 15.

Barnett said he suffered some injuries while working as a firefighter in Memphis.

"I've had a couple of ceilings fall in on me and not really do major damage but I've been knocked unconscious," he said. "Stitches, just stuff like that."

Barnett said he's distressed with the state of things in America.

"In the last few years, when you look at a lot of the protests like BLM and the George Floyd and all that, you see people go to peacefully protest, and it seems like every time nefarious characters like antifa come in and just ruin it for all of us," he said. "I mean, all these protests, be it BLM or George Floyd, we deserve to protest that. ... But every time in the last two years I've watched protests on the television, whatever, all of a sudden antifa and some of these other groups come in, and they start burning buildings down and killing people and dragging people out of their cars and destroying property."

After the lunch break on Thursday, while the jury was still out of the room, Geyer told he judge he had an issue regarding jury instructions.

"Your Honor, the issue is, on the jury instructions, it correctly, I think, requires anonymity as to ..."

"Some of us would like to be anonymous, but I don't think that's possible," said Cooper, as Barnett smiled and waved from the witness stand.

After he approached the Capitol, Barnett said he heard loud bangs outside. Someone told Barnett they were stun grenades.

"I heard someone scream the police are attacking us," he said.

Barnett said he couldn't reconcile that in his mind.

"It flipped my world upside down," he said. "I went into full crisis mode. I couldn't believe what I was seeing."

Barnett said he saw nothing that could have provoked that response from police.

"Just because my relationships, being a firefighter, my relationships with police, I never had any doubt that police officers were good people," said Barnett. "And all of a sudden, I'm watching the people I believe in, the people I trust, doing something really, really bad. And it just -- like, I lost trust in how I felt about -- not all police, but it just sunk home that I don't -- there's some bad people, you know. ... And I never really expected that with the police."

"So up until this point in your life, you had never had an experience with what could be considered police brutality?" asked McBride.

"I'm just standing there, trying to process it," he said. "I'm getting -- I'm upset, I'm angry. And then all of a sudden, out of the crowd come this whole line of police officers up onto the grassy knoll."

Barnett said they were "totally armored out" and looked like storm troopers.

Barnett said he left the phalanx of police officers and headed to the east side of the Capitol.

He said the difference on that side of the Capitol was night and day.

"It was like going from a war zone to Woodstock," said Barnett.

He said there was music and girls dancing on top of a police vehicle.

Barnett said the crowd pushed toward the steps and he went with it, eventually entering the Capitol through the Columbus doors on the east side at around 2:43 p.m.

Barnett said he wandered into Pelosi's office but he didn't know where he was until he encountered two photographers.

"They said something to the extent of, do you know where you are?" remembers Barnett. "And right about the time they said it, I saw some empty envelopes and one of them had Nancy's name on it. And I went Nancy Pelosi's office? And I picked up the envelope. And when I picked it up, I immediately saw that I bled on it."

Barnett said he took the envelope with him and left 25 cents for compensation.

Barnett said a photographer wanted to take his picture and told him to "act natural," so he sat down at the desk and propped his feet up.

Later, officers instructed him to leave the office, and Barnett went to the Capitol Rotunda. That's when he realized he left his flag in Pelosi's office.

His testimony is expected to resume this morning.