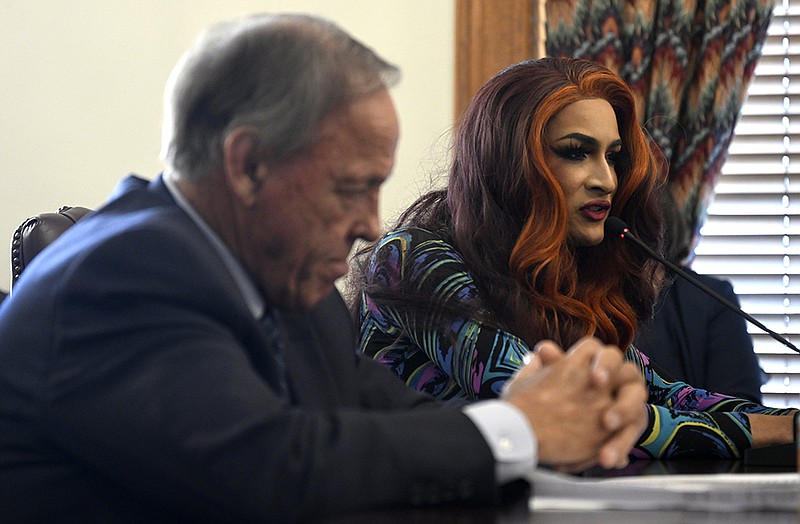 A bill that would classify "drag performances" as an adult-oriented business passed a state Senate committee Thursday after drawing sharp criticism that it could infringe on the rights of transgender people and bar certain theatrical performances.

Sen. Gary Stubblefield, R-Branch, presented Senate Bill 43 to the City, County and Local Affairs Committee as a measure to protect "innocent children." Before taking questions from committee members, Stubblefield read aloud a statement from an unnamed drag queen who questioned why parents would want their children exposed to performers who "put on makeup, jump up on the floor, writhe around and do sexual things on stage."

Stubblefield clarified that the drag queen who provided the testimony worked in a nightclub for adults and that not all drag queens perform in this setting.

A "drag performance" as defined by Stubblefield's bill requires at least one performer to exhibit a "gender identity that is different from the performer's gender assigned at birth," must be held before an audience of at least two people for entertainment and must appeal to "the prurient interest."

"All these criteria have 'and' behind them," Stubblefield said. "In order for this bill to be affected you have to break every one of these."

By requiring drag performances to have a "prurient interest" -- which Stubblefield defined as a "legal term that shows excessive interests in sexual matters" -- he said the bill wouldn't address performances such as Shakespeare plays where actors may play characters of the opposite sex.

"I don't think there's going to be any discrepancy when it comes to defining what that word means," Stubblefield said.

Opponents of the bill who spoke during the committee meeting raised doubts over whether the term was as clearly defined as Stubblefield claimed it to be.

"It seems that this bill wants to equate prurient with obscenity when that's just not consistent with what Supreme Court precedent has been for almost 50 years," said Holly Dickson, executive director of the American Civil Liberties Union of Arkansas.

Dickson noted the term "prurient interest" is only one part of one factor in a three-prong legal assessment known as the Miller Test.

The test, which is commonly used to determine whether a form of expression constitutes an obscenity, was established by U.S. Supreme Court Justice Warren E. Burger in a majority opinion in Miller v. California. The federal Supreme Court held in the 1973 case that obscene materials are not protected free speech.

Because of the unclear language of the bill, Dickson said, lawmakers would be leaving it up to courts to determine whether events, including drag queens reading storybooks to children, should be classified as an adult-oriented business.

"The language of this bill is so broad that it sweeps any public or private place into this regulation, so one's own home would be subject to the restrictions of this bill," she said.

If passed, Dickson argued, the legislation would violate the First Amendment of the U.S. Constitution and the equal protection clause of the 14th Amendment.

"There are flaws in this bill that are simply fatal," she said. "The most fatal feature of this bill is that it targets the LGBTQ community. That's an equal protection problem, and it's the same flaw we've seen in similar legislation that has been blocked by the courts."

"When talking about the prurient interest, that's in every obscenity law in the country," he said. "I think the courts know full well how to deal with that word, because it's been in court rulings and in the code for years and years throughout this country."

"Let's get real. This bill may be advertised as an attack against drag queens, but the definitions in this bill make it clear the true target is the trans community," Bailey said. "In this bill, drag is defined as performance in clothing that is not congruent with the wearer's gender, therefore preventing any transpeople from accessing public venues as themselves."

Athena Sinclair, a self-described local drag artist, said drag performances often have little to do with nudity or sexuality.

"Drag is simply art," said Sinclair, who was Miss Gay Arkansas America in 2021. "There is drag in almost everything we do in our daily lives including movies, TV shows, plays. ... Drag is not this sexually oriented thing that you've been told that it is."

"Drag shows have been a staple in the LGBTQ+ community for decades," he said. "They provide a safe space for individuals to express themselves as well as a source of entertainment and culture for the entire community."

These performances may also provide economic support for their communities and raise funds for charities, said Dutzer.

Dakota Blackmon said he "categorically opposed" the bill as a citizen of Arkansas and a Christian.

"This bill is an unnecessary assault on the First Amendment rights of many of our state citizens and, in my opinion, it is an attack on their status as children of God," he said.

The bill passed the committee on a voice vote without any audible dissent. A couple of hours later, the sounds of protest were in the air outside the Capitol.

As a crowd of around 150 began arriving near the Capitol steps, Madonna's "Hung Up" [a song sampling ABBA's "Gimme! Gimme! Gimme! (A Man After Midnight)"] and David Guetta's "I'm Good (Blue)" were among the songs played on a sound system.

There also were plenty of signs showing off displeasure at the bill's likely impact on the LGTBQ community.

"Drag is Not Dangerous."

"Respect Our Existence or Expect Our Resistance."

One sign, complete with the image of a blonde drag queen, said "SB43 Sashay Away!"

The crowd didn't just include Arkansans. Many were in Little Rock for the Miss Gay America pageant that took place this week and ends tonight.

"I'm a small-business owner who specifically deals with drag queens for cosmetics and wigs," said Jourdan, a drag queen and owner of Esther's Styles. "This feels to me like the LGBTQ civil-rights moment. ... I really think that people understand that we're going back to a time that we don't want to go back to."

While Jourdan came to Arkansas for the pageant, he attended the protest "because this is probably going to be happening in Indiana. We can't look at state lines as fences, we have to all stand together."

"We're here for the Miss Gay America Pageant ... but also Tennessee is proposing a similar slate of hate," Terri said. "And so since we were here, we felt like we needed to stand with the Arkansas community in solidarity."

"All around the country these bills are going to affect my life directly, as well as most of the people I care about," said Jess. "Anywhere I get to yell at some politicians and remind them I exist, I'm going to be there." 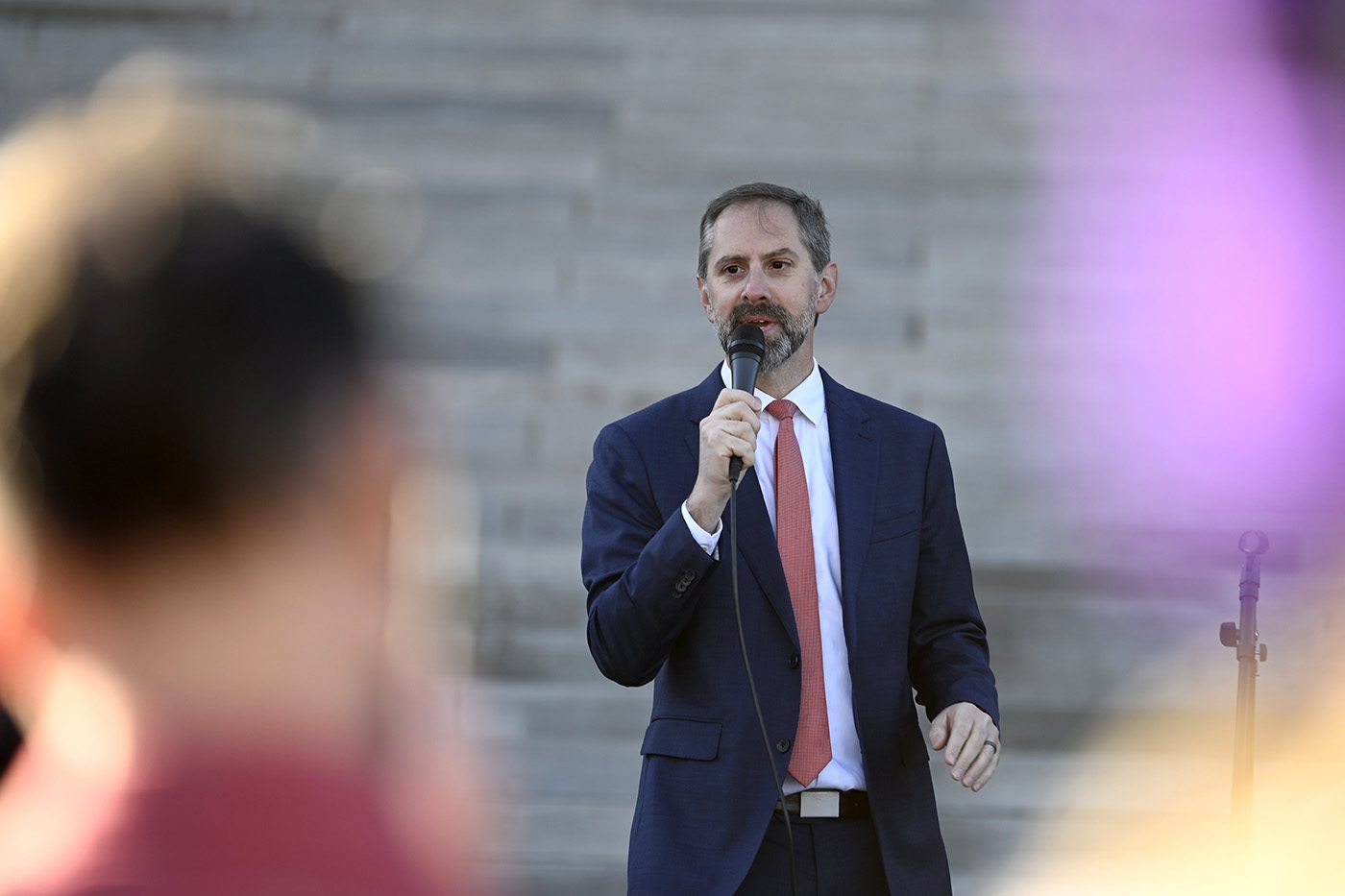 State Sen. Greg Leding, D-Fayetteville, addresses the crowd Thursday on the steps of the state Capitol during a protest against a bill to classify drag performances as adult-oriented businesses. About 150 people attended. (Arkansas Democrat-Gazette/Stephen Swofford)