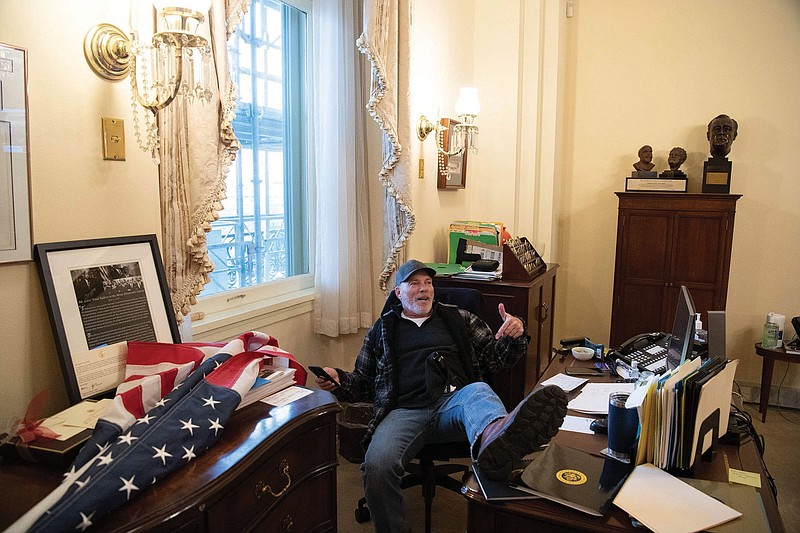 Richard “Bigo” Barnett sits at a desk in House Speaker Nancy Pelosi’s office during the Jan. 6, 2021, riot at the U.S. Capitol in a photo that gained national media exposure. His trial for his part in the breach is set to start Jan. 9 in Washington. (Special to the Democrat-Gazette/Getty Images/AFP/Saul Loeb)

Barnett, 62, of Gravette, faces eight charges in connection with the riot on Jan. 6, 2021. He got worldwide attention after being photographed with his foot on a desk in Pelosi’s office suite.

Barnett faces enhanced charges for entering the Capitol with a dangerous weapon — a Hike ‘n Strike Walking Staff stun gun that he bought a week earlier at the Bass Pro Shop in Rogers.

This morning, Barnett told Assistant U.S. Attorney Michael Gordon that he was tired of his line of questioning.

“No,” said Barnett. “I have made mistakes and I regret those mistakes. … I feel horrible about it but I’m not going to let you put words in my mouth. I’m getting quite tired of it.”

During his closing arguments, Gordon said Barnett’s response indicates he is an angry and frustrated man. The defense attorneys tried to paint Richard Barnett as a loving family man, different from his online, loud-mouthed persona of “Bigo” Barnett.